An engineering marvel and the world’s highest bridge over the river Chenab in Jammu is all set to be completed by September, two months in advance of the December deadline. This along with a tunnel across Peerpanjal ranges between Qazigund and Banihal in the Kashmir region commission last year, were two major bottlenecks in the dream project of seamless Kanyakumari to Kashmir Railway connectivity.

The latest deadline for the Railway bridge is given out in the J&K’s budget 2022-23 which was presented by Finance Minister Nirmala Sithramant in the Parliament on March 14. Earlier when the work on its steel arch was completed a year ago the deadline for its commissioning was fixed as December 2022.
The 1315-meters-long bridge will stand at 359 meters above river-bed level, which is higher than the Eiffel Tower of Paris. “The arch of the bridge once fully constructed would be around 35 meters higher than the Eiffel Tower,” Ministry officials said. The bridge is part of the Udhampur-Srinagar-Baramulla Rail Link (USBRL) project.
The bridge was constructed at the cost of Rs 1486 cr linking Bakkal and Kauri in Reasi district on the Katra-Banihal stretch.
With this bridge’s completion, the dream of Indians undertaking railway journeys to Kashmir from any part of the country is closer to becoming a reality.
The Chenab bridge is part of the third section of the 111 km Katra-Baramulla Railway link between Udhampur and Banihal has turned out to be the most challenging one to execute due to geographical challenges in the lower Himalayas.
This stretch is 92 percent tunnels and bridges. It has 12 kilometers of bridges and 72 km of tunnels. 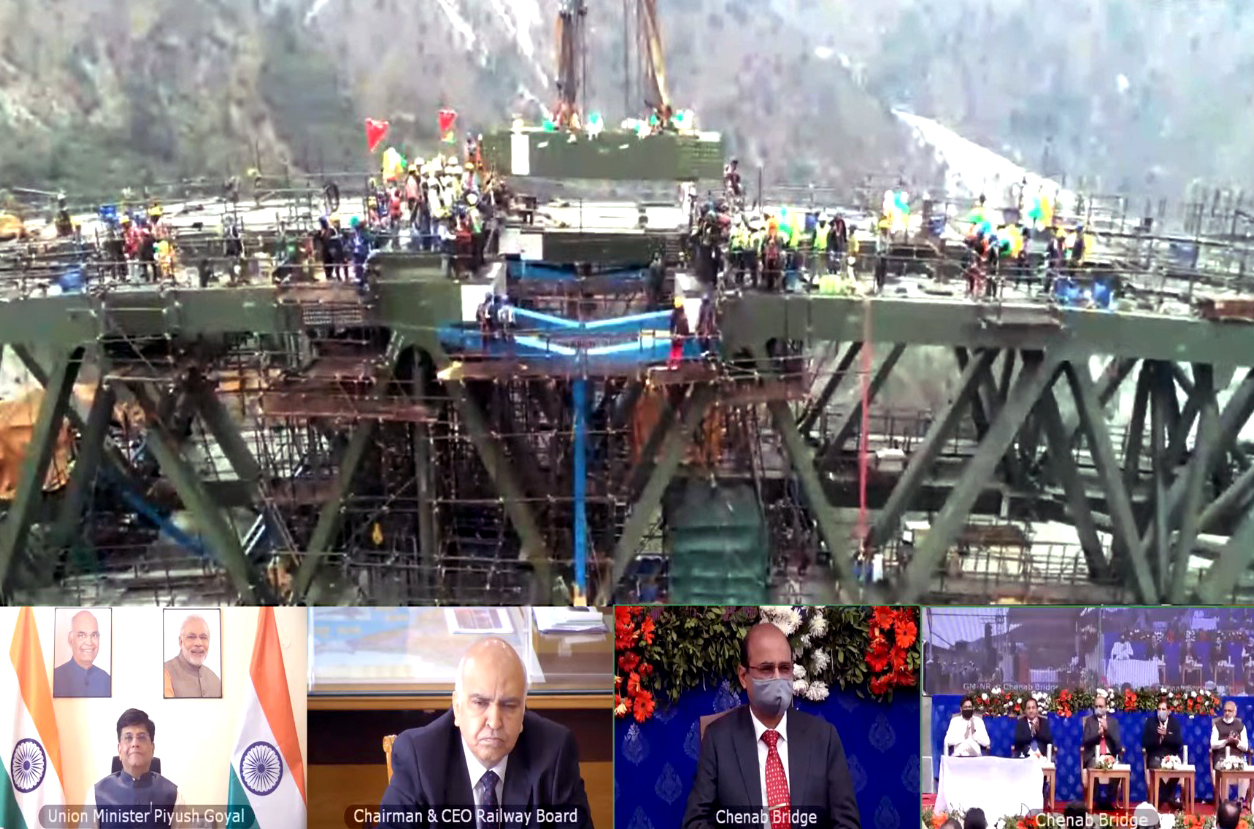 The ex-minister Piyush Goyal watches the closure of the steel arch of the bridge
The work on giving Railway connectivity to Kashmir began in 1995. The project missed many deadlines due to design issues and unpredictable geographical challenges. At one stage even the alignment of this line had to be changed and that turned out to be a blessing in disguise as it shortened the distance further.
Two stretches of the Udhampur-Srinagar-Baramulla Rail Link (USBRL) project are already completed and operational. These are Udhampur-Katra in Jammu and the 136-km Banihal-Baramulla link.
Yet another major step on the USBRL was achieved recently when the longest railway tunnel in India measuring 12.75 km was completed on February 16. The tunnel T 49 between Sumber and Arpinchala, bypassing the Qazigund tunnel (11.2 km) is located in the Ramban district.
“A major milestone has been achieved by executing breakthrough of Tunnel T49 between Sumber and Arpinchala Station on ongoing Katra-Banihal Section. It is worthwhile to mention that line and level of the tunnel is precisely achieved in breakthrough”, the Northern Railways said in a statement. 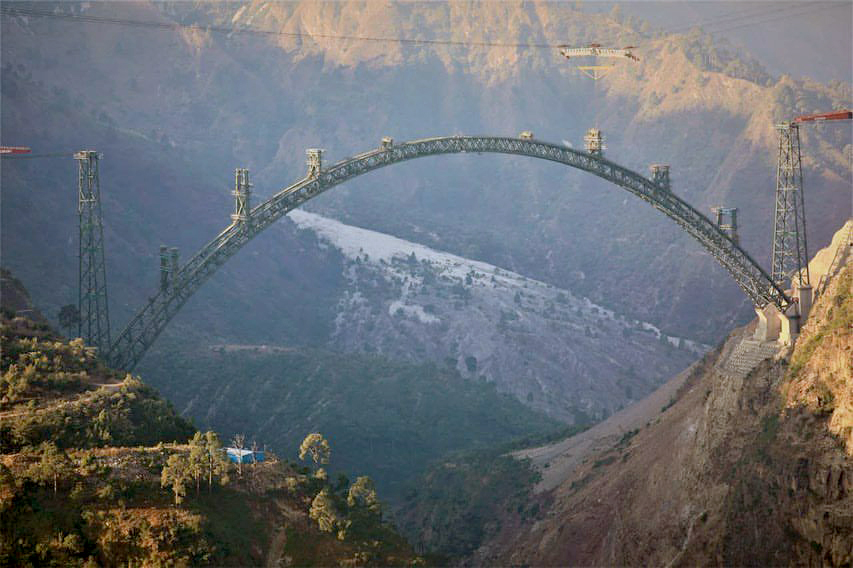 The under-construction Chenab bridge
T-49 tunnel is having two tubes -- one is the main tunnel and the other is escape tunnel. The tunnel has been constructed by NATM (New Austrian Tunneling Method), which is a modern technique of drill and blast method. The Cross-section profile of the tunnel is modified horseshoe-shaped.
The 272-km-long USBRL was declared as a national project in 2002 and its scheduled completion date was August 15, 2007. The project was delayed due to challenges posed by major earthquake zones, extreme temperatures and inhospitable terrains. 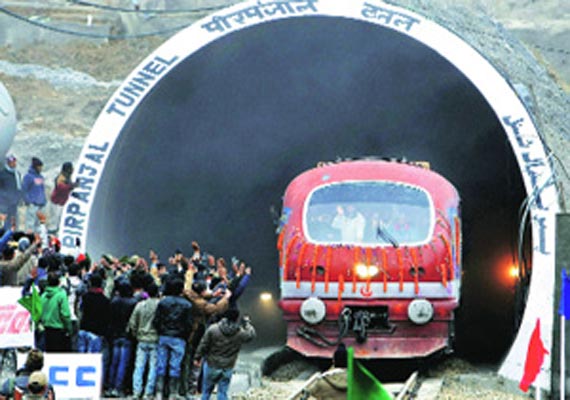 The Peerpanjal Railway tunnel
The project of constructing a railway line from Qazigund to Baramulla was initially moved in 1994. Later it was decided to connect it through Banihal (railway tunnel) for an onward link to the nationwide railway network. Before this, the construction of a 53-km-long railway line to Udhampur was taken up in 1983 to link it with the Northern end railway station at Jammu (Tawi).
Jammu and Kashmir had its first railway connectivity laid in 1897 between Jammu and Sialkot. It was closed in 1947 when Sialkote went to Pakistan in the Partition of1947. In the post-independence era, Jammu and Kashmir got its first rail link when Pathankote was connected to Jammu in 1975.
The first section of the Jammu-Baramulla railway link (53-km)  Jammu-Udhampur was completed in 2005, followed by the second section of 25 km Udhampur-Katra which was completed and became fully operational on July 4, 2014.
The third section of 111 km between Udhampur and Banihal is under construction amid geographical challenges in the lower Himalayas, which includes several tunnels and railway bridges.
The fourth section of 136 km between Banihal in the Jammu region and Baramulla in the northern end of the Kashmir region was made fully operational in June 2013.