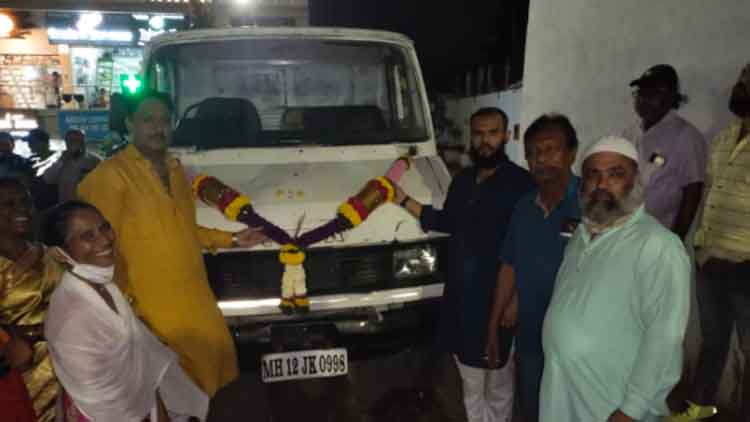 Mohsin Sheikh and his companions are handling all the arrangements of bringing idols of Ganpati Bappa to peoples’ home and picking these for immersion on the 11th days called Vinayak Chaturthi to ensure the religious festival and traditions associated with it go on uninterrupted in spite of the restrictions due to the Covid pandemic across Maharashtra.

The 10-day festival is based on the belief that Lord Ganesh visits the earth from his Himalayan abode for ten days. The festival involves installation of his idols at homes on at community spaces and is the key festival of Maharashtra where people of all faiths celebrate it with fervor and devotion. 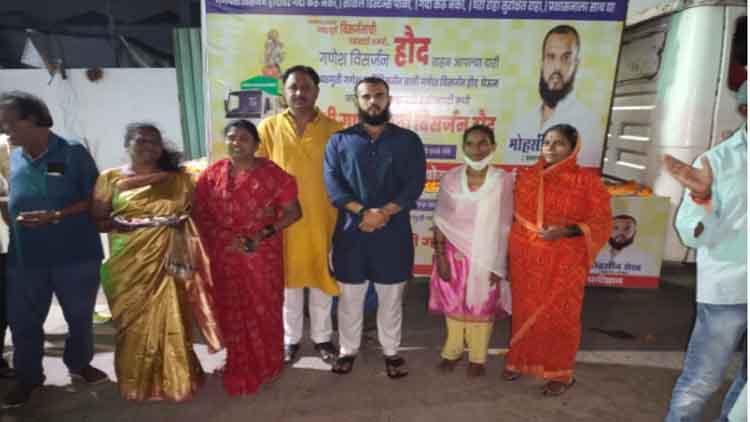 Mohsin with a family on the way for immersion

This year the idol was installed on Ganesh Chaturthi that fell on  September 10 and is due for immersion – signifying the Lord return to his abode – on September 21. Some people, however, install the idol on different date,

This year also the raging Covid-19 pandemic had forced people to celebrate Ganpati festival indoors. In such a situation, people were looking for help so that their faith and traditions are not compromised.

Mohsin Sheikh and his team sensed this problem in view of the raging pandemic and had prepared to play a major role in ensuring that the people living in Kondwana area of Pune celebrated the festival uninterrupted.

He has also made arrangements for the idol’s immersion due on September 21, as per the guidelines of the Pune Municipal Corporation. 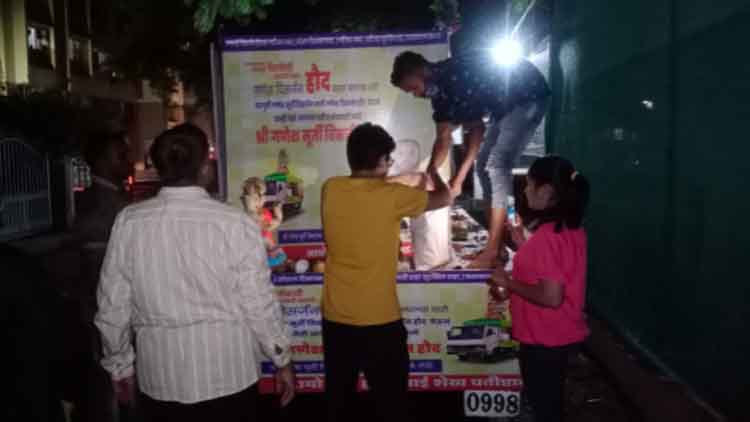 A family taking Lord ganesh for immersion in Mohsin's vehicle

Mohsin Sheikh arranged 4 tempos to bring the idols of Ganpati from people’s homes for immersion in a tank of water. People can reach there on their own or use Mohsin’s santised autorickshaws to the tank; perform worship and rituals for the immersion and bidding farewell to the deity.

Mohsin Shaikh says that the tank has special chemicals provided to him by the Pune Municipal Corporation. He follows all the tips gives by the civic body for pollution free immersion of the idol.

The immersion of Ganpati Bappa, who was installed for different times, continues continuously. The work of immersion, which started from one and a half days, will continue till September 21.

Appreciating the efforts of Mohsin Sheikh, Jayshree said, “only because of the help of Mohsin Bhai and his companions, we were able to bring Ganpati Bappa home and also send him off well today.”

Ganapati festival was used by freedom fighter Lokmanya Balgangadhar Tilak from Maharashtra in 1873 as a movement to awaken people into uniting against the Britishers. Tilak gave a new look to this festival and turned it from a private festival to a community festival.