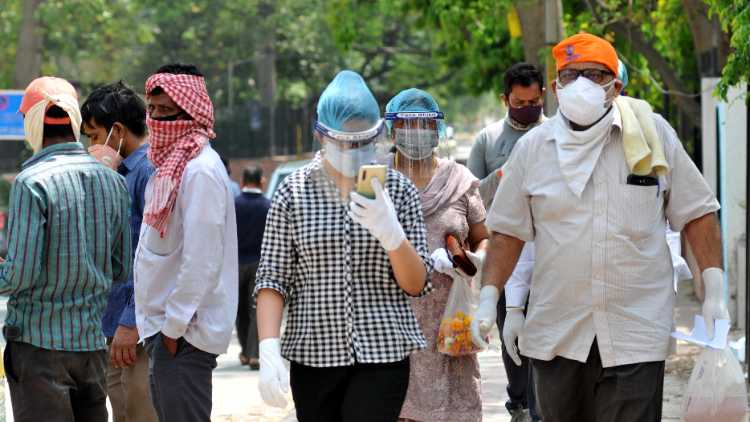 China’s aggressive behaviour along the Line of Actual Control (LAC) and the made in China COVID19 have been an unprecedented disruptor for a responsible rising India. The Indian military surprised China with a resolute and responsible response along the LAC with a balanced and well-considered strategy of ‘No Blinking No Brinkmanship.’  However, the pandemic has challenged the very concept of National Security, as the world now prepares for ‘Comprehensive National Security’. As India battles the pandemic, it will be prudent to look beyond at the likely non-traditional security challenges that India could face in the future.

India’s national aim is to transform India into a modern, prosperous and secure Nation. Peace and security are a prerequisite for long term economic development and the wellbeing of 1.36 billion Indians. Also, economic development is a must for peace and stability. For many years the focus of security challenges has been in the conventional domain, mostly confined to land and maritime borders and the air space.

India faces a mischievous Pakistan waging a low-cost high effect proxy war for over three decades now.  The security focus of the armed forces hence was Pakistan centric. The 3,488 km long India - China boundary witnessed peace for nearly four decades with the last shot in anger fired in Oct 1975. This fragile peace was shattered by an aggressive China in April-May 2020 leading to the unfortunate incident at Galwan. The stalemate continues as the two nuclear-armed nations, home to one-third of humanity, are engaged in a matching deployment across the Himalayas, with a high probability of a spiral.

Therefore the national security strategy is now focused on a proactive strategy-cum-cold start doctrine against Pakistan; a war prevention-cum-dissuasive deterrence’ against China and managing the internal security situation in the border- states of J&K and North East.

The pandemic has changed the very definition of national security as we now need to look at Comprehensive National Security, in all its domains and dimensions, in particular non-traditional security threats.  The jury is still out whether COVID19 is part of China’s biological warfare or an experiment in a laboratory gone wrong. The factual position may never be clear, but one conclusion is definite, that biological warfare is a reality, by design or default is not material. The world and India will need to prepare to build capabilities and enhancing capacities to meet and mitigate such threats in future. The key question is what are non-traditional security threats, the structures, capabilities and capacities essential to defeat these challenges in the Indian context.

Non-traditional security threats can be defined as ‘challenges to the survival and well-being of people and states that arise primarily out of non-military sources, and include all non-military, non-military conceivable challenges’. These threats can be broadly classified into categories in time and space, with a certain overlap in content and context. Most of these threats can also be grouped together when defining structures and capability building.

Some of the more challenging non-traditional threats would be Chemical, Biological, Radiological, Nuclear and Explosives (CBRNe), these could also be caused accidentally like Chernobyl (Russia), triggered by a natural disasters like Fukushima (Japan) or sheer callousness like the Mayapuri (Delhi) radiation incident in April 2010. Triggered either by accident or design by adversaries or inimical elements, the CBRNe threat is a clear and present danger. The present pandemic has only proved how unprepared and helpless the world can be against such threats.

Other threats which can manifest and are a cause of concern are Infectious Disease / Pandemic, Energy Security, Food and Water Security and Climate Change. The last one leads to disasters like the recent spate of cyclones in the Arabian Sea and the West Coast of India including Taukate is a result of global warming. The west coast has hardly ever witnessed such ferocity and devastation earlier.

Natural Disasters like the 2013 Uttarakhand floods, Earthquakes, floods in J&K, Chennai, Hyderabad, Kerala etc and also man-made. Flooding can also be a deliberate act by upper riparian like China along Sutlej, Brahmaputra and other rivers that flow through Assam, Himachal Pradesh and Uttarakhand.

The other areas to ponder over are the threat to Indian Citizens and PIOs and Indian assets abroad – like the discriminatory policies in Uganda, Kenya and Yemen that we have faced. It can also come from religious extremism, persecution of minorities etc.

Threats to national security also come from terrorism in the hinterland e.g., targeting of economic and population centres, Fake Indian Currency Notes (FICN) to disrupt the economy and fund illegal activities, drug trafficking etc. Besides, Piracy, the threat to Economic Zone assets and ventures, Virtual Societal Warfare that are aimed at changing the values and behaviour pattern of society, Weaponisation of Social Media, intervention in the Education sector to degrade Indian civilization linkages, culture and beliefs.

Cyberattack or data breach are low-cost high effective threats, especially to our key infrastructure. The October 2020 power outages in Mumbai have been reportedly caused by a Cyberattack from China. According to a news report, India witnessed 9.04 million cyber attacks in February 2021. The total number of attacks recorded in India during January-February 2021 was around 15 million.’ Similarly, the data breach is a common occurrence, recently Air India reported that data of 45 lakh passengers had been compromised. This including their Credit card and banking details.

As India looks at comprehensive national security as imperative to further the National Aim, and protect and project National Interests, there is a need to redefine and revamp existing structures, build capabilities and enhance capacities. The financial resources and the budget will always remain critical as there are and will be competing priorities at the national level, the endeavour should be to optimise existing capabilities, resources and structures. The pandemic has driven home many a lesson, these should be studied and corrective actions taken not only to battle the third or the fourth wave but also to be future-ready to meet and mitigate multidimensional challenges.

The National Disaster Management Authority ( NDMA) established in 2005 was conceived as an institution that will lay down the policies, plans and guidelines for the management of natural calamities. However, instead of building upon the expertise and strengthening the NDMA, it has been downgraded, with most of the authority now with the Ministry Of Home Affairs. There is a need is to strengthen the NDMA, State and District Disaster Management Authorities ( SDMA, DDMA) and set up the system down to the panchayat level.

The first chief of NDMA General NC Vij has the vision to incorporate the Armed Forces into the system of authority. On account of their pan India deployment, organisational structures, wherewithal, professionalism and dedication the forces have done a yeoman’s service in the times of natural disasters. During the Pandemic in the last few months, the armed forces have deployed their resources in an effective and efficient manner, providing much-needed succour through enhancing the capacities of military hospitals and opening up the facilities for the public, creating additional hospitals, moving Oxygen, medicines and medical equipment by Indian Air Force Aircraft, Naval Ships and military vehicles, repairing and commissioning Oxygen plants, the armed forces have contributed with their might.

On numerous earlier occasions, they have always been the first responders. The Armed forces evacuated 35,000 people during the Uttarakhand floods, under some of the most challenging conditions, similarly during all major disaster relief operations like the recent Yaas and Tauktae, floods, or the Earthquake in Nepal in 2015 or Sikkim in 2011. Though the armed forces are recognised and respected as first responders they need to be integrated into the planning and conduct stages. The 384 page National Disaster Management Plan 2019, finds a very brief mention of the role of the Armed Forces and so does the 56 page  National Disaster Management Policy of 2019.

Besides, the same structures and capabilities can be exploited to defeat other non-traditional security challenges. The National Cadet Corps (NCC) has excellent potential and needs to be exploited. Orissa is one of the best states geared up to manage disasters; this model too could be replicated in other high-risk states. National Medical Response Teams are needed to handle these threats at all levels i.e. state, district, tehsil, block and village level.

Structures are required to ensure an effective and organised system to mitigate emerging and existing threats. Existing structures like NDMA, SDMA, DDMA need to be strengthened. As a conceptual framework, these can be grouped into four to five task forces, some falling within the ambit of the existing NDMA and others to be driven by the Nodal Ministry.

The basic framework could be in five tiers:

·         Special Task forces - Special forces with a nucleus capable of mustering manpower and other resources in a time urgent response situation to pre-empt/ defeat an emerging threat. These could be dual tasked and trained to comprise NDRF, CAPF, State Police, Home Guards, Railways, NCC, veterans of Armed Forces, and NGOs.  The Armed Forces could lead these given the command and control structure and wherewithal.

·         Working Level - These are State, districts, block and panchayat assets needed to form the working force under guidance and directions of task forces.

·         Citizen - In any calamity, the neighbours are the first responders. Need to include it in our education curriculum at the school and college levels.

Various Intelligence agencies need to synergise the resources and inputs, possibly at the National Security Council level. This is imperative for any effective response to mitigate the threats, create a secure DATA Base with Data Centres resident in India. India should also take a lead role in the neighbourhood and regional forums and emerge as an Asian power with a global reach.