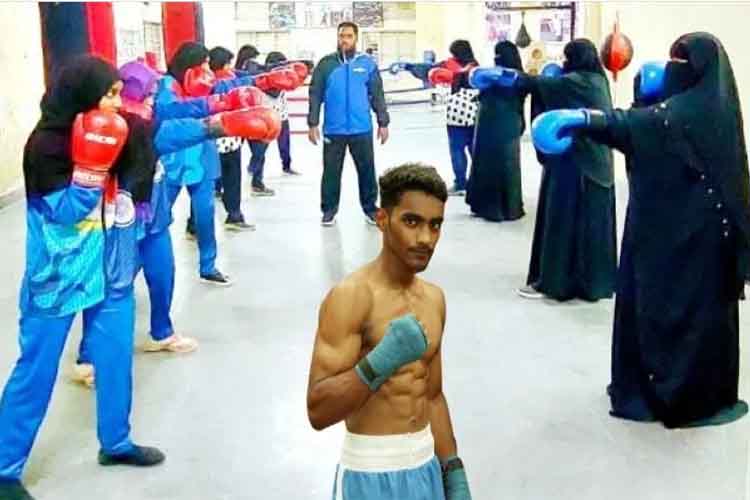 The Owaisi Play Ground managed by the Golconda Boxing Association is a picture of inclusive India in the morning and evenings as one can see scores of young men and women including burqa-clad women and hijabi girls receiving free boxing training in the mornings and evenings.
Women and girls – professionals, homemakers, and students – all come to receive the training from the famous boxer Sheikh Ejaz Ahmed. The ambiance of the place is vibrant and open; no compulsion on the dress code; Hindus, Muslims, Sikhs, and Christian women are brimming with enthusiasm while following the instructions of the trainer.
Most women learn boxing as part of the self-defense course.
The optics of this place are soothing amidst the growing tension over the wearing of hijab and burqa by Muslim women.
Sheikh Abdul Ghani alias Chand Boxer had set up the Golconda Boxing Association in 1980 after he retired from the Indian Army. He also fought three wars for the country while serving in the army.

Sheikh Abdul Ghani's father Subedar Major Sheikh Ahmed was also a boxer and so are all his eight children. In a way the family inherited boxing. Now patriarch Sheikh Ahmed’s mission is being carried forward by his grandsons including Sheikh Shabbir Ahmed alias Akbar, Sheikh Zafar Aslam, and Sheikh Ejaz Ahmed.
The association initially held boxing training classes at the foot of the historic Golconda Fort. However, Sheikh Ejaz Ahmed has been offering free training for the last 12 years at Owaisi Playground Golconda. Dozens of boys and girls trained by him exhibited their skills in national competitions and won gold medals.
Seeing this place one surely concludes that boxing is a male domain. Women and girls are competing in boxing and excelling in the rink. The Golconda Boxing Association trains 50 out of 150 girls, including burqa-wearing women.
Amrita Thakur, Syeda Salma Jahan, Ayani Sultana, Haba Fatima, Aditi, Nandani, Bushra Shah, Afshan Shah, and others from the training camp participated in national and other competitions and won medals. Girls are not only getting training in boxing for self-defense but are gaining confidence and making their families proud.
Golconda Boxing Association coach Sheikh Ejaz Ahmed has won many gold medals in national and international competitions. He won the Indo-Thai International Boxing Championship in Bangkok (Thailand) in the 80 kg Light Heavyweight category. 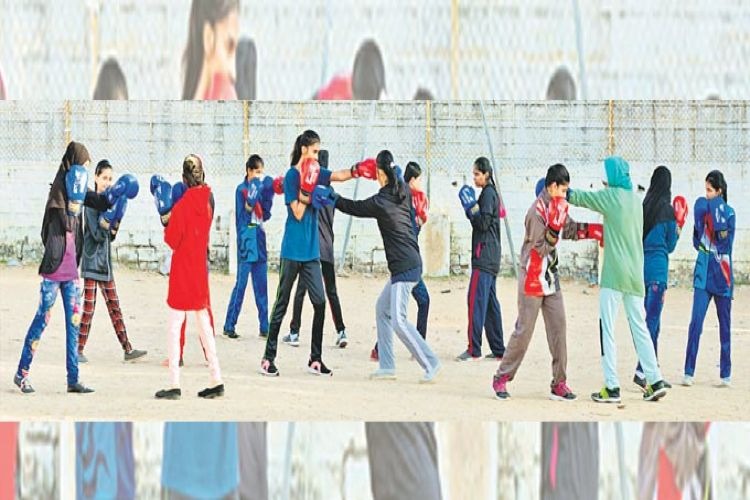 Speaking with  Awaz-the Voice, Sheikh Ejaz Ahmed said, “boxing is in our blood.” He said that his grandfather Sheikh Ahmed was the best boxer in the army. His father Sheikh Abdul Ghani participated in the All India Service Tournament while serving in the army.
He said that the campaign started by his father to promote boxing has turned into a big mission. Thousands of children have benefited from the training center so far. He said that at least 150 boys and girls come for training there every day.
Golconda Boxing Association needs no introduction in the city of Hyderabad. The players here have left an indelible mark with their performances. This is the reason all famous boxers come to this training center to impart skills and encourage players.
World-renowned boxer Husamuddin, Arjuna Award winner Maken, and many other boxers have not only visited the training center but also praised the talent of the children. Amrita Thakur, the national gold medalist is also from the Golconda Boxing association.
Sheikh Ejaz Ahmed said that it is necessary for the youth, especially girls, to get training in boxing particularly for self-security. Boxing training is also a way to remain fit and healthy. 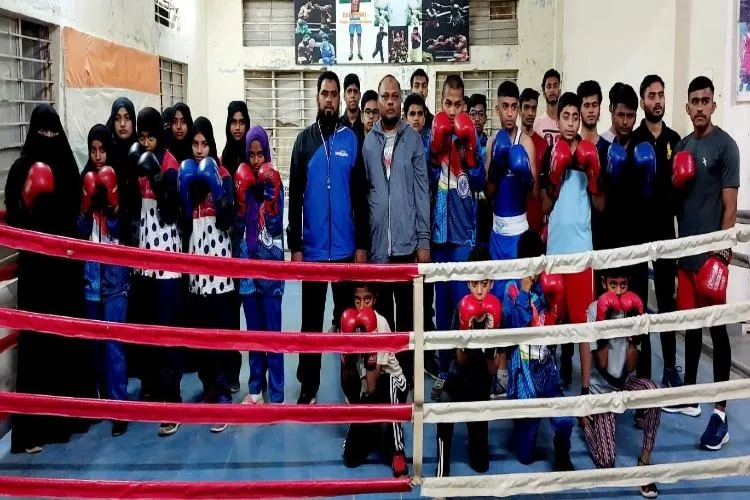 Sheikh Ejaz Ahmed said that it will be good for the youth not to spend time in visiting restaurants and other means of recreation; by learning boxing they have many advantages and can also bring laurels to the country and enhance the prestige of their family.
He said that learning and training are related to human passion and discovery. The dress code does not matter in this regard. This is the reason that today dozens of women wearing burqa are taking boxing training at their center.
He expressed happiness over the enthusiasm of women and girls for training in boxing. He said that the players should take stock of what we did today and what we have to do tomorrow. Only then can we set the stage for progress.
Ejaz Ahmed said that just as India is the cradle of people of different religions, in the same way, their training center is a beautiful bouquet of various flowers. It is the responsibility of all of us to maintain this beauty of India.