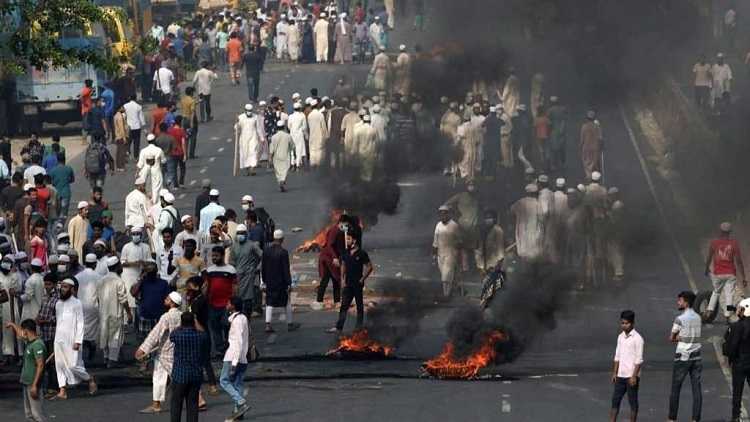 Around 14,000 people have been accused in numerous cases filed over the violent protests in Bangladesh organised by the Hefazat-e-Islam militant group since March 26 against Indian Prime Minister Narendra Modi's visit to Dhaka.

A total of 14 people, 10 in Brahmanbaria and four in Chittagong, were killed in the ensuing violence when the militants staged attacks on police, government and law enforcement personnel officials.

For the carnage in Brahmanbaria, over 8,000 people have been accused in seven cases and 14 suspects were arrested so far, the police confirmed on Wednesday.

At least 3,000 unnamed Hefazat members were accused for their involvement in the pre-planned vandalism, arson attacks and massacre in Chittagong and Munshiganj.

On March 26, when Modi arrived in Dhaka, a group of Hefazat militants attacked devotees outside the Baitul Mukarram National Mosque in the capital city.

The same day, the militant outfit called for a day-long strike across the country on March 28 and announced a country-wide protest on March 27 for the deaths of its members during clashes in different districts.

In the pre-planned massacre, there was also significant damage and looting at the Anandamoyi Kali temple, the biggest temple of Asia.

Besides, private property, vehicles of police and fire service, cultural establishments and government properties and all the documents of land office of Hathajari and Brahmmanbaria were set ablaze.

No policemen or Fire Service officials was present for 3 days in Brahmmanbaria.

Regarding the fact that none of the top members of Hefazat and Jamaat-e-Islami, another banned group, were included in the cases filed, IGP Benazir Ahmed, said: "But if they are found involved after the investigation, legal action will be taken against them for sure, action will be taken against the instigators. The attacks stained the golden jubilee of Bangladesh's Independence."

Abdul Hamid, known as "Madhupur Pir" of Hefazat's central committee who attacked the police on March 28 in Munshiganj district's Sirajdikhan upazila, was not made named as an accused.

He is also the superintendent of Madhupur Qowmi Madrasa, deemed as a "breeding ground" of militants.

Mohammad Mahfuz Afzal, Additional Superintendent of Police (administration and crime), said" "Police did not make Madhupur Pir an accused as he was not involved in the attack on police during the strike."

"Among the 15 accused, Mohammad Obaidullah Kashemi, 40, president of Hefazat, Sirahdikhan unit and Abdullah, 35, were made accused," he mentioned.

SM Rashidul Haque, superintendent of Chittagong District Police said that, they filed four cases with Hathazari Police Station over the attacks on policemen, vandalism at stations, and other charges.

Officials of the Assistant Commissioner (AC Land) office in Hathazari upazila also filed two cases over vandalism at their office and setting one a vehicle on fire.

Rezaul Karim, officer-in-charge of Patiya Police Station, said they filed a case accusing at least 700 unidentified people under the Anti-Terrorism Act with the police station.