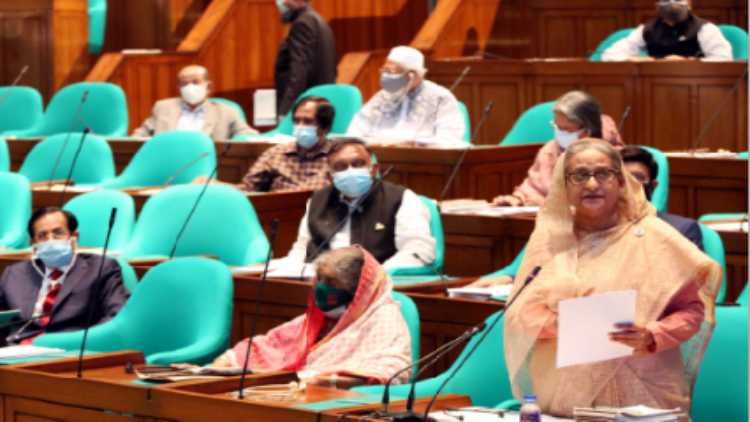 Bangladesh Prime Minister Sheikh Hasina has called the Hefazat-e-Islam outfit “a disgrace to the name of Islam” following  the group’s top leader Mamunul Haque being caught at a resort with a woman who he identified as his second wife.

The premier made the remark in the Parliament that was prorogued on Sunday as Bangladesh imposed a nationwide lockdown to contain the surging cases of COVID-19.

According to Bangladesh newspapers, Sheikh Hasina took the Hefazat to task for stating violent protests across the country.

"Hefazat leader Mamunul set vehicles on fire and attacked people... after then he went to spend holidays with a beautician in a resort, whom he claimed as his second wife...,”she said, questioning the source of Mamunul's money.

Mamunul, joint secretary of Hefazat was caught with a woman at a Sonargaon resort on Saturday. The woman is said to be running a beauty salon.

According to Sheikh Hasina Mamunul later while talking to his original wife said his act happened in the context of the situation.

“He (Mamunul) went to a resort to have some fun with a beautiful woman right after committing all the carnage. They are a disgrace to the name of Islam. They are belittling Islam,” she said.

Speaking specifically about violent protests during Indian Prime Minister Narendra Modi’s visit to the country, Hasina asked the group: "You, the Hefazat leaders and workers, don't you go to study at Deoband? So, how dare you to protest against the Prime Minister of India's visit?"

"I have managed all opportunities for you people to go abroad... I'm surprised...," she said.

She warned Hefazat that People will never spare these militants, those who only destroy Islam, she said.

"I want to ask... Islam is a religion of peace, how did these Hefazat militants attack the public!" Hasina said.

"It is a secular country, no one should be attacked in the name of Islam. Who uses children in massacres, set vehicles and homes of Awami League leaders on fire, attacked Awami league workers only, destroyed all the establishments of the government... These militants are a shame to the Muslims. Those militants will never be spared," she said.

Referring to the government's zero-tolerance stance against militancy, terrorism, drug and corruption, she said the NSI will have to do whatever is required to protect the people's lives, livelihoods, properties and interests as well as ensure peace in society.

Asking the NSI to remain alert always, she said Bangladesh has attained the status of a developing nation and would be a developed country by 2041 if "you people perform your responsibilities perfectly".