A group of 159 Hindu pilgrims from India and some other countries have reached Pakistan for paying obeisance at the Samadhi of of Shri Param Hans Ji Maharaj at Karak in Khyber-Pakhtunkhwah (KP). According to Mashriq Vibe website, a group of Hindu worshipers from India have reached Lahore via Wagah-Attari border and would fly to Peshawar to visit the historic temple.

Guru Paramhans Dayal was a Hindu saint who passed away in July 1919. He is buried in Teri village of Karak district in KP. Alongside his Samadhi, a Krishna temple was also built. Following the Partition of India and Pakistan, the temple was closed in 1947.

In 1997, the temple was attacked and demolished. In 2015. However, on the orders of the Supreme Court of Pakistan Shri Paramhans Ji Maharaj's Samadhi and Krishna Dwara temple were rebuilt. Again the temple was vandalized in 2020 by a mob led by Jamat-e-Islami. Again the matter was sorted with political and judicial intervention. 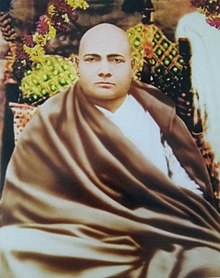 The initiative – considered important for the promotion of religious tourism between two South Asian neighbours – will allow millions of pilgrims from India to visit the sites of religious importance in the province.

According to Dr. Ramesh Kumar Vankwani, Patron General of Pakistan Hindu Council and Member National Assembly, Pakistan Hindu Council has signed an important agreement with PIA, under which Hindu pilgrims from all over the world, including India, will be provided travel facilities to visit their holy sites in Pakistan.

Vankwani said from Lahore, the Indian pilgrims will be brought to Peshawar by special flight. Pakistan Hindu Council has also decided to cooperate with Air India for providing travel facilities to pilgrims. Vakwani was at Attari to welcome the Indian pilgrims and he released this video on Twitter:

Vankwani further said that after January 20, Pakistan Hindu Council will take Pakistani citizens, including parliamentarians, on a four-day visit to the shrine of Hazrat Nizamuddin Auliya in Delhi and Dargah Khawaja Gharib Nawaz, Ajmer Sharif, in Rajasthan.

He informed that the Indian pilgrims will also visit other historical sites including Minar-e-Pakistan, Shahi Qala and Badshahi Masjid.

He claimed that in February, Air India flights will start operating from New Delhi to Peshawar and Karachi to provide travel facilities to the pilgrims in KP and Balochistan.

Vankwani hoped that the promotion of religious tourism will bring the people of the two countries closer.