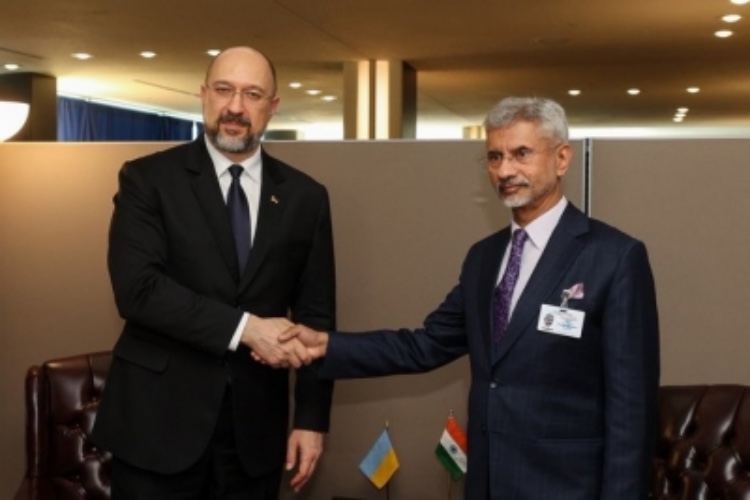 "I emphasised the need to join forces to stop Russia's war against Ukraine" and "thanked India Government and people for humanitarian aid", Shmyhal tweeted after their meeting on the sidelines of the General Assembly high-level meeting. Their meeting took place on the eve of a Security Council meeting on Ukraine at which Jaishankar is expected to participate.

Tweeting about their meeting, Jaishankar said he thanked the Ukraine leader "for sharing his perspectives and assessment of the ongoing conflict".

"Discussed their consequences, including for food security, energy security and safety of nuclear facilities," he added. Shmyhal also tweeted that he counted on India's support for the Black Sea corridor for exporting foodgrains from his country and for demilitarising the area around the Zaporizhzhia Nuclear Power Station (ZNPP).

Europe's largest nuclear is under Russia's occupation and there has been shelling around it putting it at risk. While India has remained neutral on Russia's invasion abstaining from votes at the Council and the Assembly condemning Moscow, it has provided humanitarian assistance to Ukraine and recently voted with the West on a procedural vote to invite Ukraine President Volodymyr Zelensky to speak remotely to the Council despite Russia's opposition.

In what is probably the sternest public stand on the invasion, Modi said last week during his meeting in Samarkand with Russia's President Vladimir Putin, "Today's era is not an era of war. We have discussed this with you on phone several times, that democracy, diplomacy and dialogue touch the entire world."

But it is to be seen if that would translate to a change in India's position and votes at the UN. Zelensky is scheduled to address the Assembly Wednesday after remotely after he received special permission to speak Jaishankar had an impromptu meeting with Dominican Republic's Foreign Minister Roberto Alvarez when he ran into him at the UN headquarters.

"Good to run into my friend", Jaishankar tweeted, adding "Our new resident Embassy (in Santo Domingo) is a statement of our growing cooperation" with the Dominican Republic. Jaishankar also attended an interactive discussion at Columbia University's School of International and Public Affairs that was organised by Aravind Panagariya, the Director of Deepak and Neera Raj Center on Indian Economic Policies at the university and a former vice chair of the Niti Aayog.