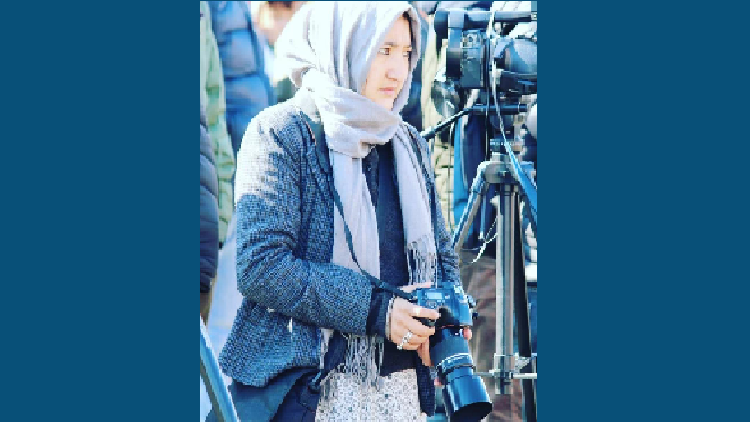 Hakima Bano has become Ladakh's first woman to win a gold medal by topping the Journalism course at Central University of Kashmir. Ladakh’s Deputy Governor RK Mathur has congratulated Hakima Bano in a tweet and said that Hakima Bano has set a high standard for journalism. Mathur also wished her a bright future.

Hakima told Awaz-the Voice that she completed her masters in English from IGNOU and joined masters’ course in Central Journalism from the Central University of Kashmir.

She is the first woman to study journalism from Kargil, Ladakh. She has also cracked the National Eligibility Test (NET) in Mass Communication and Journalism.

Hakima is an enthusiastic social worker and serves as a National Youth Volunteer at Nehru Yuva Kendra, Kargil. She is a member of a couple of Ladakhi NGOs like SEHOK, and also a voluntary blood donor.

She has been working as a program presenter and compeer at the All India Radio, Kargil, for past six years, where, she says, she discovered her interest in media. She is happy at being awarded a gold medal. “Being first in any field is a big thing in itself," she told Awaz-the Voice.

Hakima said that she was least interested in the traditional courses like MBBS, engineering etc. and always wanted to do something different and live a life of choices. She believes one should chart his or her own course of life and not join the rat race while thinking of a profession.

Hakima’s achievement is impressive as she comes from a remote area and where traditionally girls’ dropout rate is higher than the rest of the J&K till a few years ago.

Haklima is the only active female YouTuber of Kargil and her channel has about one million subscribers. At times she also gets trolled. “It’s better to ignore negative people on social media.” She says.

Hakima is a peoples’ person and never misses a workshop or an event where she has an opportunity to meet experts and professionals from different fields. “Every time I meet an expert, I learn something new,’ she says.

Besides her studies, Hakima loved to participate in sports events in school. She plays table tennis, badminton and archery. Though she excelled in studies and co-curricular activities of her school, she admits, “My basic education is weak, as I have studied in a government school from the first grade.” At that time, government schools did not have the same facilities and teaching faculty as today.

She said that made her take more interest in sports and other activities.

Hakima is the first and the only one of her five siblings to go out of the district for studies. She was the only Ladakhi student of her class in the university.

She says, "Unlike me, Kashmiri students had a good educational background. Some students were also from journalism background. But for me, this topic was very new. All my classmates had a good grasp on English language, which was necessary, because all the lectures in our classes and the interaction with the faculty members of our department were in English,” she says.

Many times she felt inferior to others. However, she says with God’s grace she overcame all obstacles to emerge the topper in the batch.

She wants to pursue a career in teaching in the mass communication section of the proposed Ladakh Central University in Leh.

Hakima Bano has requested the UT administration to introduce some new subjects, including mass media and journalism at higher secondary and college levels.