A awarenes and registration camp for Mumkin scheme in progress in Shopian, Kashmir (Twitter Employment Shopian)

Hatib Javaid of Memendar, Shopian, South Kashmir was responsible for providing for his family. However, his job as a casual labourer fetched him just enough for a hand-to-mouth existence. A few months ago, his life changed after he was handed over the keys of a commercial vehicle by the district officials as a beneficiary under the “Mumkin” scheme of the UT government.

Earlier, Hatib could hardly bear the expenses of his family. “Sometimes I would not get work for days and will end up eating into my savings in that phase. This feeling of not being able to save money to realize my dream of being on my own made me feel depressed,” said Hatib.

Mumkin is a customised livelihood generation scheme of Mission Youth of the J&K government launched last year. Its target is to help youth jobless persons start their ventures and businesses and become financially be self-reliant.

“Getting to know about the Mumkin scheme through an awareness program of the District Employment and Counseling Centre (DE&CC), Shopian, came like a ray of hope in my life,” said Hatib. “Besides making me aware of an opportunity, the briefing gave my dreams wings. I became self-employed by owning a vehicle”, he said.

Hatib is today a happy and proud owner of Tata Yodha and is earning enough to not only feed his family but also meet other expenses that he earlier could never afford. The vehicle is given on a highly subsidized loan.

At least 144 youth in the Shopian district of South Kashmir have become self-employed under the ‘Mumkin’.

The district officers received 200 applications under the scheme, out of which 144 cases were approved in a year and 88 have been provided with commercial vehicles to ply and make a decent earning. The scheme is open to youth from 18-35 age group. Those seeking to avail of it can register their names on the portal.

Under the Mission Youth, the government of Jammu and Kashmir provides Rs 80,000, or 10 percent of the vehicle's on-road price, whichever is lesser, as an upfront subsidy. The vehicle manufacturers provide a special discount, not less than the subsidy amount, which comes out as total of Rs 120,000 or 20 percent of the on-road price.

The scheme covers small commercial vehicles such as load carriers, Taxis, Minibuses, Tempo, etc. The selected beneficiaries don’t have to make a down payment or margin money, collaterals or guarantor for availing the highly subsidized loan from the banks.

Another beneficiary, Sahil Ahmad Khanday of Pinjoora said he is on cloud nine after receiving a Mahindra Pickup Vehicle under the ‘Mumkin’ scheme. Like many youngsters of his age, Khanday always dreamt of earning decent to improve the economic conditions of his family.

Seeing the struggle of his family in making ends meet, Khanday learnt to drive at a young age and started lending a helping hand to his family. He was working for private companies and other vehicle owners daily. 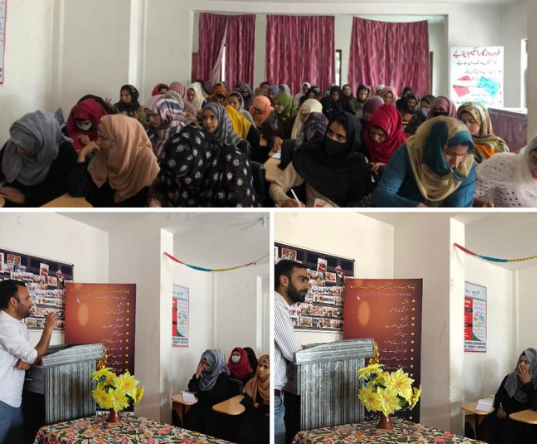 Awarenss and registration camp for women in Shopian (Twitter)

“I didn't earn enough to fund the education and other needs of my four younger siblings. I used to work for 12 to 14 hours daily, but at the end of the day, I was getting peanuts,” said Khanday while revealing his ordeal of tough times.

Last year, Khanday saw the news regarding the Mumkin scheme on social media and immediately rushed to the DE&CC Shopian.

After completing all formalities, he was handed over the keys of the vehicle of his choice

The registration camps for Mumkin and other self-employment schemes in the district are being held in the open and out in the forest areas and on-the-spot registrations are done for aspiring youth.

It may be mentioned that J&K has the highest unemployment rate in India partly because of the lack of big industries and businesses in Kashmir due to three decades of turmoil and insurgency. For this reason, the government is addressing the problem with self-employment schemes that are a major hit.

Sahil Ahmad Khanday of Pinjoora said he is on cloud nine after receiving a Mahindra Pickup Vehicle under the ‘Mumkin’ scheme.

Like many of her peers, Khanday dreamt of earning decent money to improve his family’s living conditions.

Khanday worked as a driver for individuals and small businesses on a daily wage basis since his student days when he wanted to supplement his father’s meager income.

“I was not earning enough to fund the education and other needs of my four younger siblings. I used to work for 12 to 14 hours daily, but at the end of the day, I was getting peanuts,” said Khanday said. It was last year that Khanday saw the news item regarding the Mumkin scheme on social media. “I immediately rushed to the DE&CC Shopian office.”

Also Read: A Bihar village where Hindu festivals are celebrated at Sufi shrine

The day he saw handed over the keys of his vehicles, he said his joy knew no bounds “I am thankful to the government for providing me a source of livelihood,” Khanday said.