Irfana Zargar, a young woman from downtown Srinagar, remembers her father in a special way. He had bought her a pack of sanitary pad as she felt shy of buying the same from the market.

She was 21 when her father passed away due to a heart attack. His death shattered her but soon she picked threads of her life and decided to remember him in a unique way.

Each day she distributes sanitary napkins, sanitizers and undergarments and other goods that impact the health and personal hygiene of women; all in her father’s memory. She spends part of her salary that she earns as an employee of the Municipal Corporation on her campaign.

She told the media, “The biggest goal of my life is to regularly distribute sanitary napkins and other related items to the needy women every month and I will keep doing this till my last breath in memory of my late father.”

The woman, hailing from Nowshehra, said she is keen to expand her work to cover more areas, “I want to take my mission to remote villages in the valley so that I can reach the poor and simple women.”

Like many communities, women in Kashmir suffer in silence due to taboo of talking about women’s special health and hygiene needs openly. As Irfana breaks these taboos, she is not limiting her mission to her neighbourhood; she has created a hygiene kit comprising sanitizers, soap and sanitary napkins to be kept in each public toilet of the city. 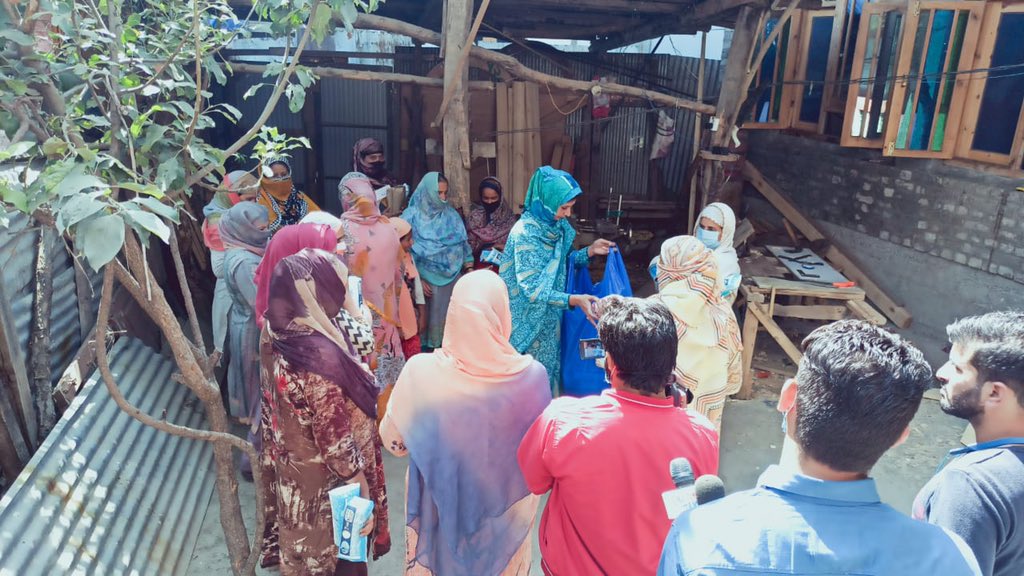 “I have started providing things that women need during menstruation in public washrooms, many women who are traveling face embarrassment and inconvenience and she can easily procure these in the women’s toilet.”

She continued her mission during the lockdown in the wake of the corona virus. Irfana said, "During this lockdown, I not only gave sanitary pads to needy women, but also distributed hand sanitizers and hand washes to protect them from corona.”

She says, “Whenever I get a call from a woman, I go and provide them with the necessary stuff. Some women are still shy and instead send their parents to me.”

She bears all the financial burden of her campaign. “I am doing this work alone. Sometimes transportation is not available. I spend a part of my salary on this mission. Also, I do this work along with performing my domestic chores and attending the office work. I have to do it; I have no time to rest.”

Asked if anyone has offered her help, he said, “Right now I am bearing the cost all by myself. There was an offer for help, but since it’s a charity work, I don’t want to disclose the names.”

Irfana says that in the rural Kashmir, menstruation is still considered an embarrassment and associated with shame. However, because of her campaign, she is able to see the changing attitudes and it’s a welcome thing.

“Menstruation is a divine blessing for women. It is the basis of mankind. If there is an imbalance or the cycle ends, the world ceases to exist,” she says and conveys the same message to women.

She believes not only women should be given more respect, but they be served and looked after by men. During periods, they should not be allowed to do any kind of hard work at all, she must be provided with all the necessities to maintain her dignity, health and hygiene. After all a family is run by a woman and she must be given her place of pride.

Irfana says, "If men don’t buy a sanitary pad and other health related goofs for a woman today, then tomorrow he may have to spend lakhs on her health issues.”

How did the idea of launching such a campaign come? Irfana says, “I belong to a middle-class family. I lived with my mother and we had no regular source of income. Both of us faced so many problems.”

"When I started earning, my mind would go to poor women; I wondered how they are managing during menstruation.”

This is how it all started.

No wonder that Irfana is popularly called 'Pad Woman' of Kashmir Valley.