Anchal Singh with the prototype of her invention
Varanasi

Aanchal Singh, a student from Prime Minister Narendra Modi's parliamentary constituency of Varanasi, has developed a 'Solar Cooling Bottle Belt', which can remove the hassle of buying a refrigerator or ice for cooling a bottle of water. Aanchal's father, a resident of Varanasi, works at a fuel pump station in Maharashtra's Kalyan city. She is also pursuing her first-year B.Com there. However, these days she is in Varanasi.

Impressed by Modi's 'Make in India' initiative, she has manufactured the 'Solar Cooling Bottle Belt' to cool the water in summer.
This device can be fastened to any water bottle or cold drink bottle.

The device-fitted bottle can be placed in the sun for it to work and cool the water. It can be easily used by people traveling on motorcycles and cycles in strong sunlight. They will get cold water to drink even in harsh summer. With the help of this device, you can cool the water bottle kept with you. It takes about an hour to cool a liter of water. 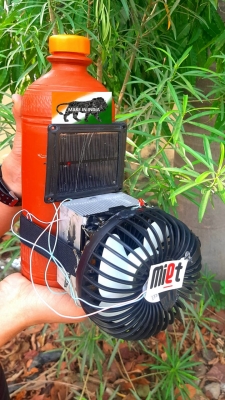 Little device that cools the water with solar energy
It took two months for Aanchal to make this device and spent some Rs 3,000-4,000.
She said a 6-volt solar plate, thermal cooling plate, 6-volt cooling fan, rubber belt, and bottle were used ifor her model. To further improve the cooling belt, MIET College Atal Community Innovation Centre in Meerut has promised to help.

Puneet Agarwal, Vice-Chairman of the college said: "We are always ready to promote this type of innovation. Solar energy, used as alternative energy, is now becoming an important part of our energy needs. Given its increasing demand, new experiments are being done in this field as well. This is a very cool invention that will keep the bottle cold without electricity."

Regional Scientific Officer Mahadev Pandey appreciated this innovation of Aanchal. "It is said that solar energy is very friendly for the environment. This system is completely based on sunlight and does not cause any pollution. This can reduce electricity bill. Many people will benefit from such innovation."

Since it is not very expensive, the device can be easily bought by those who find it difficult to buy a refrigerator, says Aanchal.