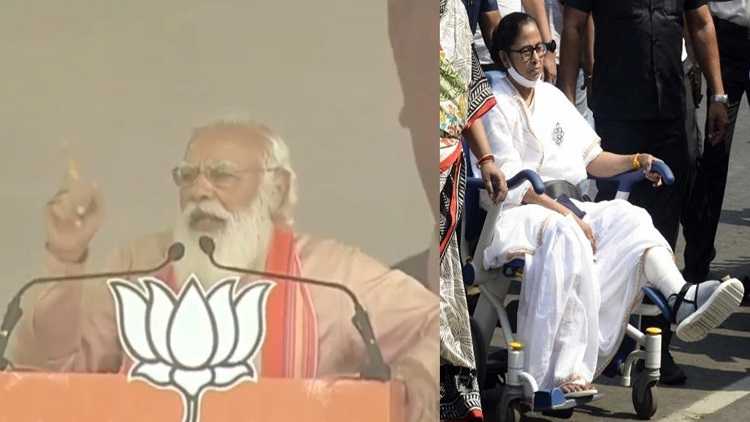 Chief minister Mamata Banerjee on Saturday questioned the central forces' version of firing on voters in self-defence in Cooch Behar. After four people were killed in Sitalkuchi during the fourth phase of the Assembly elections, West Bengal Chief Minister Mamata Banerjee said her government will initiate a CID probe into the incident.

Speaking at a press conference in Siliguri, Banerjee said “her government will initiate a CID probe into the incident. When BJP (Bharatiya Janata Party) knows they are going to lose, and they will lose, that is why it's assimilating all state governments to spread violence in Bengal. Home Minister Amit Shah is completely responsible for today's incident and he himself is the conspirator. I don't blame central forces as they were working under the Home Minister's order," she said.

Banerjee also said that the Election Commission (EC) had changed many police officers without consulting the Trinamool Congress (TMC) government, adding that it had planned these attacks.

Confirming that she herself will call for an enquiry in the matter, the Chief Minister said: "I believe that they are doing too much on political instructions, on Delhi's instructions. When BJP cannot win any election in a democratic way, then they resort to this way -- murdering and gunning down people and capture areas. Before every election, police terrorise the areas."

She further claimed that the violence she saw in Nandigram was her eye-opener, adding that she did not think that they were so dangerous and were planning such attacks.

"In this festival of democracy, if the central police fires and kills the voters, then what should the Election Commission say? I hope that they will make a statement," Banerjee said, further slamming the commission for having retired police officers serve as election officials.

She also condemned the attitude of the Centre and said she will keep asking people to keep BJP as far from the state as possible.

"I would report to all the Chief Ministers, and all the leaders to see how BJP is running the elections? It is a shame on democracy," she added.

The Chief Minister will go to Mathabhanga hospital to pay her respects to the deceased while condemning the incident and praying that they get justice.

Violence erupted at a polling booth in Cooch Behar during the fourth round of polling. Trinamool Congress alleged that Central Forces opened fire twice at polling booths in Cooch Behar where people are casting their votes, killing four party workers.

Official sources in Cooch Behar confirmed the death of four people in the district.

Following the incident, the EC ordered the adjourning of the poll in PS 126 of Sitalkuchi AC, Cooch Behar based on an interim report from Special Observers. The EC will seek a detailed report from them and the Chief Election Officer by 5 pm on Saturday.

Mamata Banerjee had said she will hold a protest rally in Cooch Behar tomorrow against the firing incident and visit the homes of the deceased.

Addressing a public meeting in Hingalganj earlier today, Banerjee said, "CRPF has shot dead four people in Sitalkuchi (Cooch Behar) today. There was another death in the morning. CRPF is not my enemy but there is a conspiracy going around under the instruction of the Home Minister. Today's incident validates that."

"CRPF has killed voters standing in the queue. Where do they get so much audacity? BJP knows that they have lost, so they are killing voters and workers," added the chief minister.

Meanwhile, CRPF clarified that the component was neither deployed at the said booth nor involved in the incident in any way.