Dr Darakhshan Andrabi, chairperson, J&K Waqf Board
Ehsan Fazili/Srinagar
Dr. Darakhshan Andrabi, the first woman chairperson of the Jammu and Kashmir Waqf, says she plans “to transform places of pilgrimage in the Union territory into world-class centers.” Andrabi is the first-ever woman to head a Waqf Board in the world. A prominent writer, poet, and social activist, Andrabi’s appointment came last month after the J&K Waqf body was reconstituted by the Union Ministry for Minority Affairs.
The New Waqf Board has a five-year term. The board's first meeting was held in Jammu on March 16, where Dr. Andrabi was unanimously elected as chairperson by the members, Dr. Ghulam Nabi Haleem, Suhail Kazmi, Syed Mohammad Hussain, and Nawab Din.
Speaking to Awaz-the Voice, Dr. Andrabi said, her task is cut out.“How to transform various places of pilgrimage into world-class centers will be the priority of the new Board”, she said.
She lamented that Waqf assets in J&K “had been used by politicians for their power games for the past seven decades. Now this has to change. and I assure you all of my honest efforts to transform the huge Waqf set-up in J&K”. 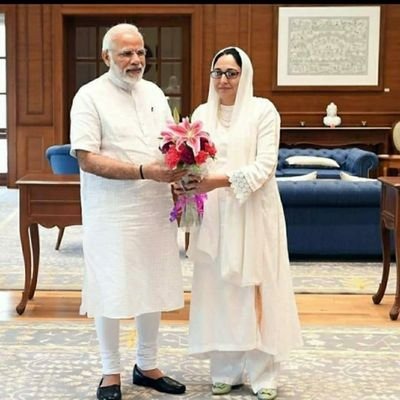 Dr. Darakhshan Andrabi with Prime Minister Narendra Modi
The Waqf Board of J&K looks after around 32,000 properties including shrines and mosques, out of which 25,000 have been geo-tagged last year by the Deputy Commissioners and revenue authorities. This was recently disclosed by Lt Governor Manoj Sinha while felicitating the new Waqf body in Jammu.
Andrabi said that the rest of the properties would be demarcated and geo-tagged soon with the support of the district administrations. She said that on the instructions of Prime Minister Narendra Modi, digitization of Waqf records has been completed in many States and UTs in the country. “We are also on it,” she said.
“Transparency in Waqf management (assets and revenues) will remain our priority,” Dr. Darakhshan Andrabi told Awaz-the Voice, as she referred to the management of shrines of Sufi spiritual saints. These shrines, she said, “need huge reformation and infrastructural boost.”
She said she would like to put curbs on the exploitation of pilgrims by the shrine management. There is a need to “create better infrastructure at the famous shrines keeping in mind the comfort of the pilgrims.” 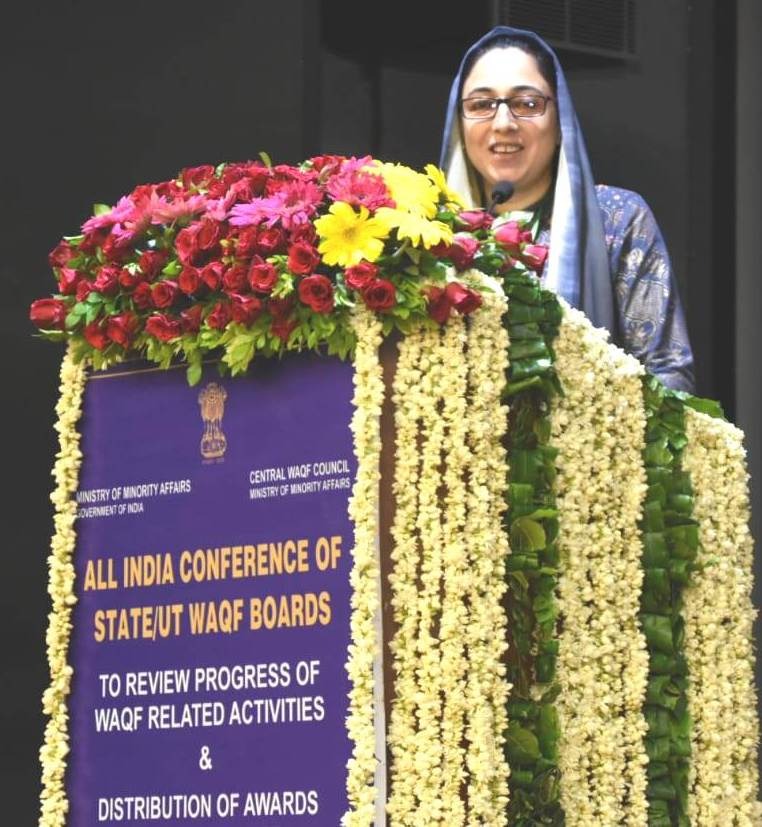 Dr. Darakhshan Andrabi speaking at the function of the central Waqf Board
Andrabi also stressed the need to restore hygiene and sanitation at these places of spiritual glory.
“A drive against all encroachments of Waqf properties will soon begin”, Andrabi said. She added that the rental policy of Waqf assets would be “reviewed and reframed soon so that we can generate due income from our assets located at prime places” across the UT.
“Soon Waqf (Board) will be a self-sufficient body with extra earnings which will be utilized for establishing standard educational, vocational and health institutes”, Andrabi said.
The first Chairperson of J&K UT’s Waqf Board has earlier worked as a member of the Central Waqf Council for more than six years. She has also worked as the Chairperson of the Education and Women Welfare Committee and Chairperson of the Central Waqf Development Committee of the Union Ministry of Minority Affairs.
She said, “under the leadership of Mukhtar Abbas Naqvi (minister for Minority affairs), I got opportunities to deal with all State and UT Waqf Boards in the country and earned a lot of experience in dealing with the management issues of Waqf in India.''
She said, “I am witness to the transformation in Minority Asset Management in India during the past seven years.”
“It is my good luck that I have been entrusted with the noble assignment of streamlining the Waqf  Management in J&K. God has chosen me to be the first woman to head any Waqf Body throughout the world,” she remarked. 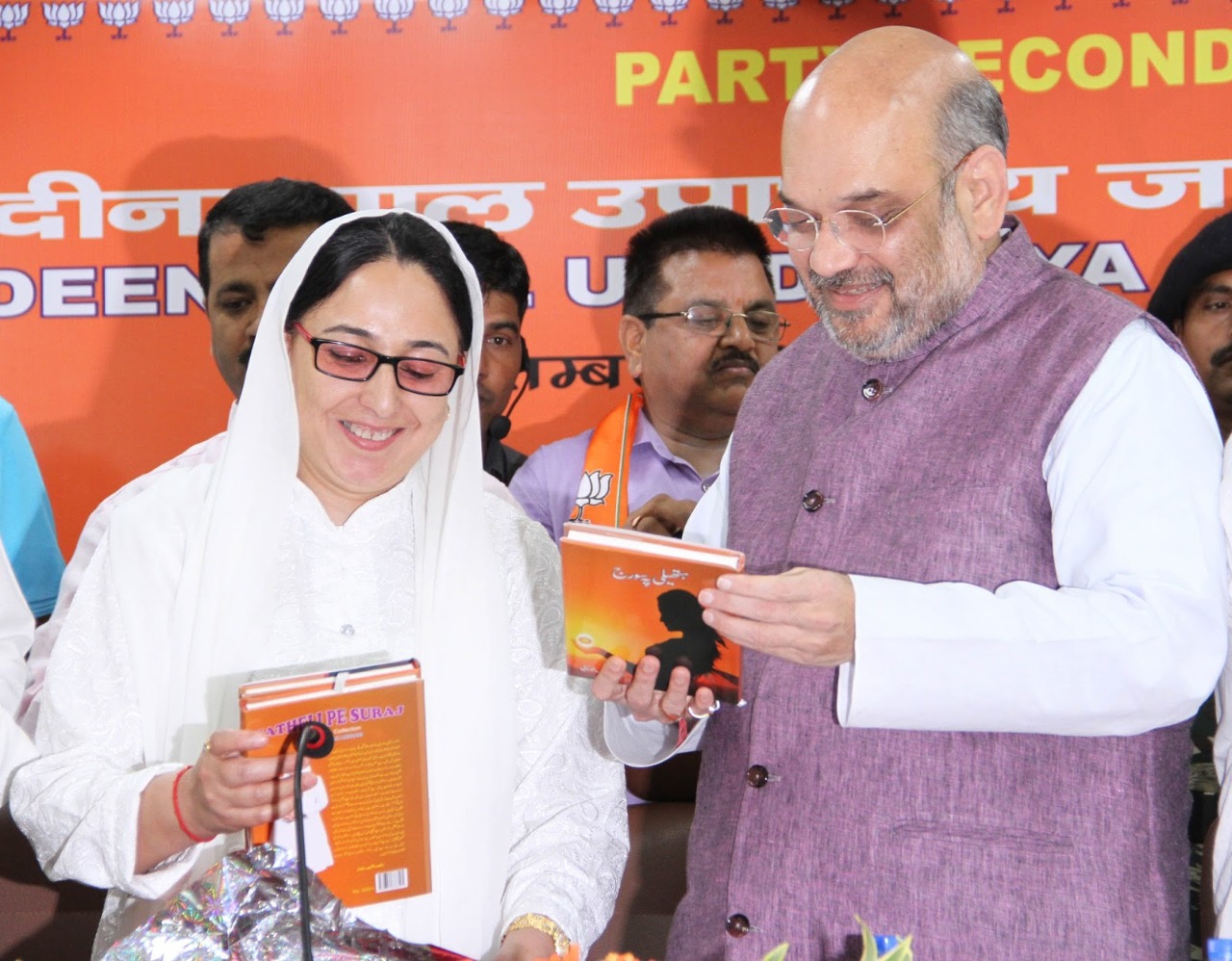 Dr Darakhshan Andrabi presenting her book to Home Minister Amit Shah
Darakhshan Andrabi is a well-known litterateur, who writes in Urdu and Kashmiri. She is also a member of BJP’s National Executive and Core Group on J&K and also the party spokesperson.
She joined the BJP seven years ago and merged her Socialist Democratic Party (SDP) with it. As a leader of SDP, Andrabi was vocal against the “separatist ideology of Kashmiri politicians.”
ALSO READ: Why is Modi's interaction with "exam warriors" not politics?
D Andrabi has a doctorate in Urdu from the Guru Nanak Dev University, Amritsar. She has so far published six collections of Urdu and Kashmiri poetry and a book on literary criticism. She has received awards from the J&K State Academy of Art, Culture, and Languages and also the State award for her contribution to literature in 2018.
In the meanwhile, Darakhsha Andrabi said the Waqf board is busy ensuring hassle-free water and power supplies, and other essentials to the public in shrines and mosques during the month of Ramzan.