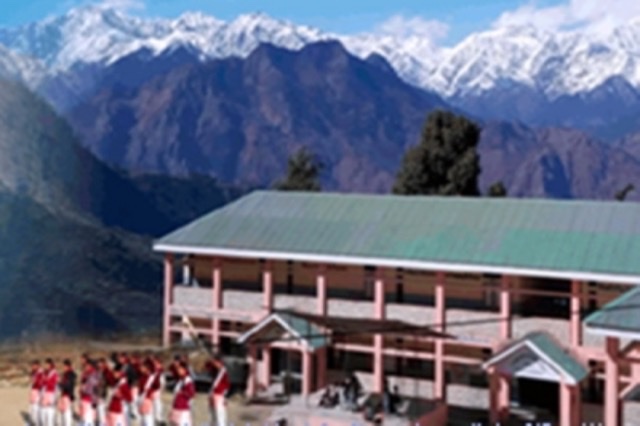 In what is being seen as an attempt to saffronise school education or to revive its ancient glory, the Himachal Pradesh School Education Board (HPSEB) is going to introduce Sanskrit from Class III and Vedic mathematics from Class VI from this session. Besides, the state has plans to start teaching the Bhagvad Gita as a subject to students from Class IX to XII from next year.

Critics believe that rather than providing quality education that rests on the foundation of honing knowledge in English, mathematics and science, this is just an attempt to saffronise minds at a tender age. However, state Education Minister Govind Thakur believes there is nothing wrong in introducing books on values. The aim is to make the students aware of their culture.

"The Bhagvad Gita will be taught in schools in Sanskrit and Hindi. Also, Sanskrit will be introduced from Class III since it is rich in vocabulary, literature and values," he said. Thakur's statement comes in the wake of Gujarat's announcement that the Bhagvad Gita will be part of the school syllabus for classes 6 to 12 this year. HPSEB chairman Suresh Kumar Soni told IANS that the board has prepared the syllabus for teaching Sanskrit and Vedic mathematics in all government and board affiliated schools. He said it would take time to start teaching the Bhagvad Gita.

The student strength in board schools in Class III is around 1.50 lakh, while in Class VI it's around 1.25 lakh. The HPSEB will be the first education board in the country to introduce Sanskrit at the primary level. For Class III and IV, the Sanskrit examinations would be objective. After that, the exams will be descriptive. For Vedic mathematics, the basics and introduction of the subject will begin in Class VI. An official statement quoting Chief Minister Jai Ram Thakur said the younger generation must be taught Sanskrit so that they could feel proud of their rich culture and traditions.

He believes Sanskrit is the most ancient language and perfect among the great languages of the world. It is the greatest treasure given to the world by ancient India. The state Assembly in February 2019 passed a Bill to make Sanskrit the second official language of the state. The first official language of Himachal is Hindi. In an order on March 4, the Director of Higher Education directed that prayers in the morning school assembly may be in English, Hindi and Sanskrit to develop the interest of students in these languages also. Responding to the move to start introducing Sanskrit from Class III onwards, Government Senior Secondary School Principal Ashwani Thakur, who is posted in Kufri near here, said that most of the government schools have a Shastri (classical and vernacular) teacher who can easily teach Sanskrit.

Presiding over a programme of Sanskrit Bharti at Jwalamukhi in Kangra district in February, Governor Rajendra Vishwanath Arlekar said, "We have faith in Sanskrit but sincere work should be done to promote it, for which Sanskrit Bharati was striving." He said Raj Bhavan would set up a special cell that would advise on the spread and practice of Sanskrit. Arlekar believes Sanskrit is a divine language that needs to be converted into a lokbhasha' (lingua franca).

"The BJP is trying to politicise education. Instead of imposing the party's agenda, the BJP government should focus on improving and providing basic infrastructure in the schools," said Congress spokesperson Naresh Chauhan.