Is numerology behind success of prodigy Nabiha Rahman? Nabiha Rahman, 10, is a prodigy who scores in every competition that she participates in. The more than 100 trophies, medals and certificates displayed in a showcase that covers one wall of the living room in her Nazira home stand testimony to the talents this fact. The impressive tally notched up in only four odd years.

Nabiha sings, dances, recites verses from the Quran, tops her class and also packs a mean punch as the sub-junior champion in Kungfu at the district level.

Numerologists would most likely attribute her exceptional talent to her date of birth. She was born on 11.11.2011 in the 111th room of East Point Hospital at Nazira in Sivasagar district.  Her doctor, Dilip Gogoi had also told her parents -- Syed Moinur Rahman and mother Nafia Haque that she was the 11th girl to be born in the district that day.

For the parents, however, it was enough that their daughter was born on a day holy to both Hindus and Muslims; she was born on Raas Purnima, celebrated by Hindus and it was a Friday, auspicious day in Islam. To top it, it was the National Education Day.

Her father sent her to Zikir exponent Nasiruddin Ahmed to learn the Sufi songs of peace and harmony. Her first participation in an all-girls' group at Nazira in a Zikir competition was when she was only six. The group bagged the first prize.

Syed Rahman said that from 2018, Nabiha led a group of five to seven girls, belonging to Nazira. The group was a winner all the way, achieving either the first or second prizes in all the zikir competitions.

On December 4, 2021 she was invited to perform a zikir with her group at Shankardev Kalakshetra in front of Chief Minister Himanta Biswa Sarma,  the occasion being the observation of  the death anniversary of Syed Abdul Malik in which a three-day Zikir workshop was organised. Rahman said that later she and the others also participated in the workshop. Earlier that year she had performed in a programme at Cotton College.

Apart from Zikir she has bagged prizes in speech competitions on Nobiji and Hazrat Mohammad, in reciting verses from the Quran which indicate the impact of science on Islam, she also got a second prize in an all Assam online poetry recital contest  organised by Charaudeo Global News World.

Nibha with her Zikir troupe

"In the online poetry recital contest it was her first attempt and she had had been also taught online  how to in tone and express the stanzas by woman in the neighbourhood as the pandemic lock downs were on at that time," Rahman added.

Rahman said that his daughter also  excelled in the Murda Gosal competitions in which they have to demonstrate the rules of cleaning a woman's body before burial.

He further emphasised that only women could perform this ritual for a woman who had died and the men for a man.


With her fame spreading, Nabiha was also invited by All India Radio, Dibrugarh this year in June to record a zikir and recite the poem, Swaddhin, composed by Manju Gharphalia

Rahman said that her foray into martial arts came about when they went to see the sport at Chokimukh, about 5kms away from Nazira.

"She was taught the moves of the Ashihara Karate School by Hemanta Sir and Kutubuddin Ahmed Sir. In Nazira in her debut she won a silver and in the district games, a gold. In the North East competition held at Boarding Field, Sivasagar, where she received a good beating and had broken down in tears, she got the third position. We did not expect anything and had left the venue. Her teacher gave her the medal at our home, "Rahman said.

The Ashihara Karate is a street fight style where players have to tackle opponents in real defence strategies.

Nabiha does everything with elan. All these do not affect her studies and she maintain a 96 to 98 percentage in every exam. A class 5 student of Markaz Academy, Nazira, Nabiha also takes part in all the school sports where she again excels and brings home the laurels and trophies.

She also participates in the cultural programmes and other activities in her school. Nabiha says that she loves dancing the Bihu and likes to dress up in the Bihu ensemble. 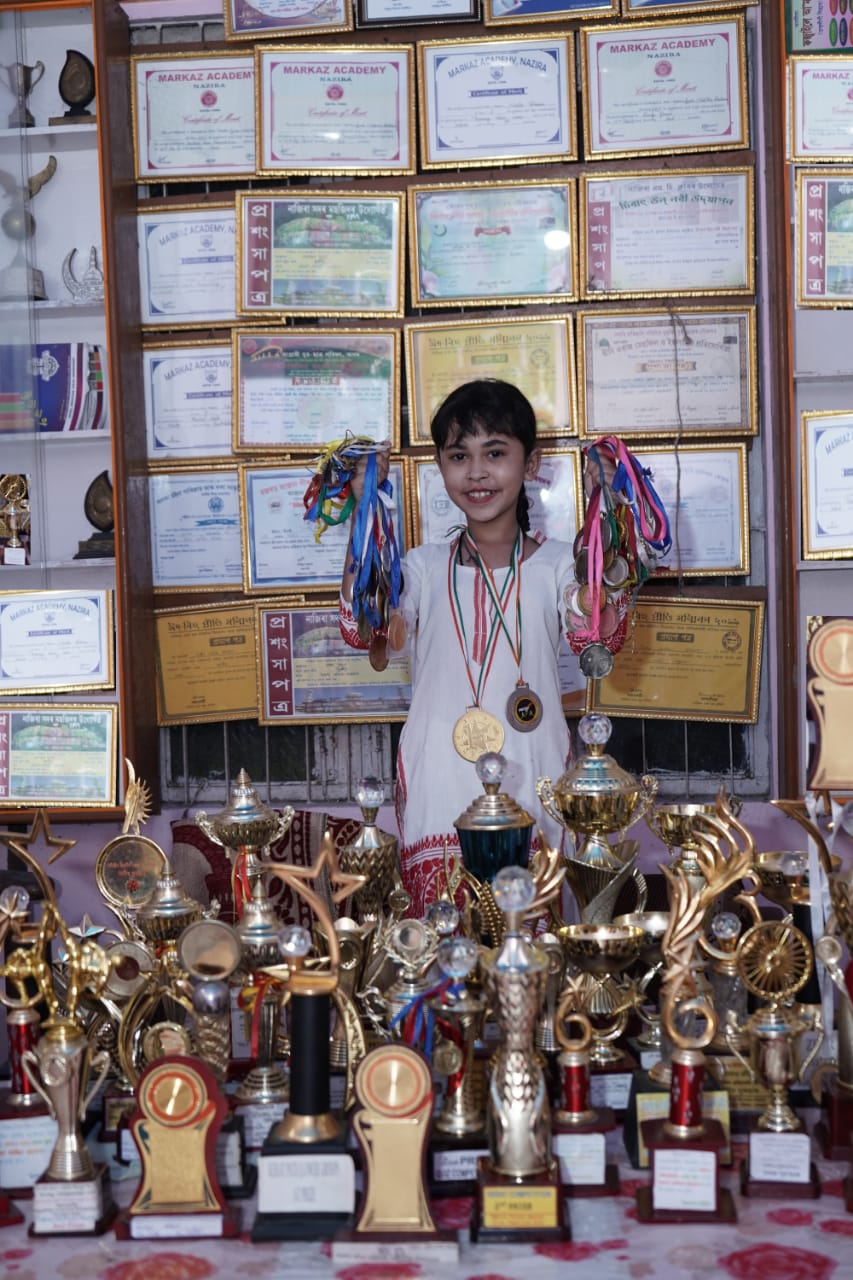 Nibha with her medals and trophies

Even when she sings Zikir, she says that she likes to wear the dress and head gear made from the Assamese gamosa.

Like any other child of her age, Nabiha also likes dressing up in different costumes and dolling herself up like a fashionista.

She also watches cartoons, serials and is fond of watching movies especially horror movies and like every other home there is a tussle between father and daughter for the TV remote whenever there is a cricket match on. It may be mentioned that Syed Moinur Rahman is an umpire with the Assam Cricket Board.

On a rare occasion Nabiha recently lost at the 2nd Ashihara State Karate Championship-held at Dergaon.


Her opponent a nationals player bested her but that has not fazed her. Nabiha has vowed to better her moves and win the next time round.


Her parents have decided to give her wings to fly as far as she wants even if society looks askance at a girl of their community taking to martial arts.