In the ongoing process to empower social communities that had suffered historic deprivations under the since abolished special status of Jammu and Kashmir, the students belonging to Tribal communities can dream of flying, literally so.

The UT government has launched a scheme "Wings to fly J&K" that offers merit-based scholarships to the ST community students who wish to become pilots and other professionals in the aviation industry.

The scheme offers a scholarship of Rs 30 lakh to students to pursue commercial pilot license training, Cabin Crew, and Ground Staff courses. The scholarships will be given based to quilifiers of the aptitude test to be conducted for the applicants. The application for the scholarship closes on August 30. 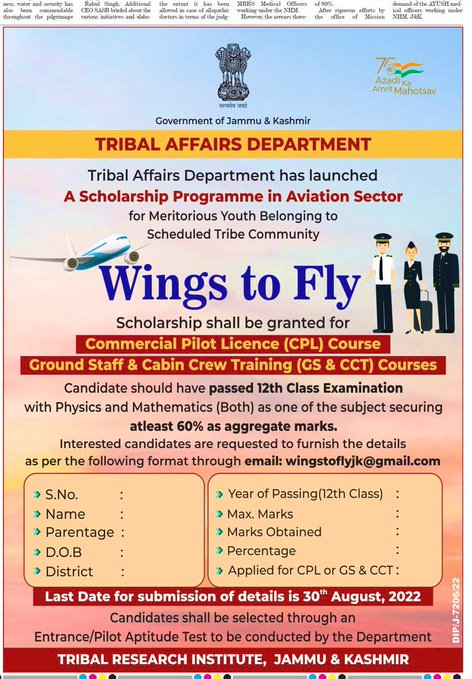 Poster of J&K government on Wings to Fly J&K scheme
Jammu and Kashmir has Gujjar, Bakerwals, and Gaddis as scheduled tribe communities. They form the third largest chunk of the population after Jammu’s Dogra and Kashmiris. According to Shahid Iqbal, secretary, Tribal Affairs Department of the state the nomadic community of Bakerals have a poopulation of 6.12 Lakh and it's the world’s largest Transhumant population.
Of late the government has kept focus on young members of these communities. Last month a group of 200 students of Scheduled tribes communities were flagged off on an all India tour to acquint them with the rich culture and history of the country. 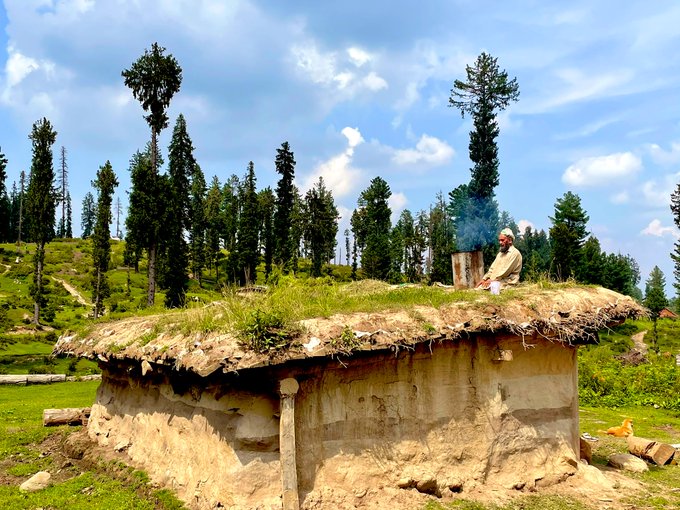 Lt Governor Manoj Sinha posted one of the most decorated IAS officers, Shahid Iqbal Choudhary, as Secretary J&K Tribal Affairs department soon after he did a commendable job in containing and handling Covid-19 as Divisional Commissioner of Kashmir.

In July the government gifted top 20 tribal students in the matriculation examination Rs 50,000 worth laptop, and Scholarship upto Rs 25,000 and certificate of appreciation as incentive for education.

The communities have also been given land rights under the Forest land Rights Act that did not apply to J&K before August 5, 2019, big-ticket changes.
Shahid Choudhary said he had just distributed solar lamps and tensts among a new nomadic families and the wrote is on. He wrote that he has been touring different hilly areas to make surveys of the needs of the nomadic bakerwals. He wrote:

Choudhary is the recipient of national and state-level awards for his brilliant work. He belongs to Poonch, Jammu.
Again the changed situation in J&K, it’s for the first time that two scheduled tribes of J&K will have political reservations as seats have been reserved for them in the Legislative Assembly under the new Delimitation Commission award.
Also Read: J&K Election: Leaders rake ‘outsider’ issue ignoring changed reality - I