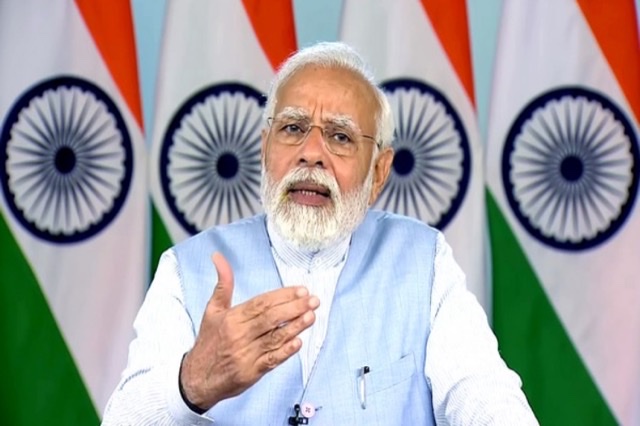 Prime Minister Narendra Modi on Sunday hailed 126-year-old Padma awardee Baba Sivanand for agility and termed his passion for Yoga and dedication for a healthy lifestyle inspirational. In the 87th episode of 'Mann Ki Baat', broadcast on Sunday, PM Modi said, "The life of Baba Sivananda is an inspiration for all of us. He has a passion for Yoga and leads a very healthy lifestyle."

Referring to Baba Sivanand's heartwarming gesture at the Padma Awards ceremony, the Prime Minister said that everyone must have observed Baba Sivanand in the recently held Padma Awards ceremony. "Seeing the agility of the 126-year-old, everyone must have been as astonished as I was. Before one could bat an eyelid, Baba started bowing in the Nandi Mudra. I bowed a number of times and offered Pranaam to Baba Sivanand ji," said PM Modi, in his monthly radio programme 'Mann Ki Baat'.

PM Modi noted Baba Sivanand's age of 126-years and his fitness being "a subject of discussion" in the country. "I saw several comments on social media that Baba is more fit than people four-times younger than him," he said while wishing him a long life. Baba Sivanand received the Padma Shri award on Monday. Dressed in a white kurta and dhoti, Baba Sivanand was a picture of simplicity and grace as he knelt and bowed down in front of the Prime Minister and President Ram Nath Kovind as a mark of respect.

The Prime Minister too got up from the seat and bowed to the veteran Yoga legend. The President stepped out and helped Sivananda to rise to his feet, after which he honoured him with the award and the duo posed for pictures and were seen in a brief conversation. The oldest man to be conferred with the Padma Shri award, Swami Sivananda is a monk from Varanasi. Born in August 1896, he is cherishing his remarkable 126 years of living. Despite his distinctive age, he stands strong enough to perform Yoga for hours, according to a write-up by Rashtrapati Bhawan on Padma Awardees. Swami wakes up as early as 3 am in the morning and adheres to a fixed routine. Standing 1.58 metres tall, Sivananda sleeps on a mat on the floor and uses a wooden slab as a pillow.

Fit without any medical complications, he practices Yoga every day and performs all rituals on his own. He leads a simple life, eats a simple diet, and serves others with his selfless service. In his childhood, poverty made him sleep empty stomach many times, while the rest of the time, his family could afford to feed him boiled rice and water. He was brought up by his Guru Omkarananda Goswami at an Ashram at Nabadwip in West Bengal. He imparted all practical and spiritual education, including Yoga without school education.

He lauded the individual efforts of activists driving the cleanliness campaign in the country while calling upon the people to carry out their duties. In the 87th episode of the monthly radio broadcast 'Mann Ki Baat', PM Modi illustrated the individual efforts driving the cleanliness campaign in the country by highlighting the works of two persons. "Health is also directly related to cleanliness. In 'Mann Ki Baat', we always mention the efforts of the proponents of cleanliness," said the Prime Minister.

He further mentioned Rahul Maharana of Puri, who goes to the pilgrimage sites and clears the plastic garbage. "There is another Swachhagrahi - Rahul Maharana of Puri in Orissa. Rahul goes to the pilgrimage sites in Puri early in the morning every Sunday and clears the plastic garbage there. He has cleaned hundreds of kilos of plastic garbage and dirt so far. Be it, Rahul of Puri or Chandrakishore of Nashik, they teach us a lot," said PM Modi. "As citizens, we must carry out our duties, whether it is cleanliness, nutrition or vaccination... all these efforts also help us in staying healthy," he added.

He also called upon start-ups in the health sector especially those in the Ayush sector to put their content online in all languages recognized by the United Nations and not just remain restricted to English. The Prime Minister, in his latest episode of 'Mann ki Baat' today, underlined that the Ayush manufacturing industry is reaching around Rs 1.40 lakh crore rupees and expressed confidence that Ayush Start-Ups from India with better quality products will reign all over the world.

"I have a request for the start-ups of the health sector and especially the Ayush start-ups. Whatever portal you design online; whatever content you create, try to make it in all the languages recognized by the United Nations," he said. "There are many such countries in the world where English is neither spoken nor understood much. Promote your information keeping such countries in mind as well. I am sure that soon, Ayush start-ups from India with better quality products will reign all over the world," he added.

Noting that the Ayush industry is continuously expanding, the Prime Minister said that six years ago, the market for medicines related to Ayurveda was around Rs 22,000 crore and it has now reached Rs 1.40 lakh crore. "This means that the possibilities are continuously growing in the area," PM Modi said adding that in the world of star-ups, "Ayush is becoming a subject of attraction." PM Modi on Sunday addressed the 87th episode of 'Mann Ki Baat', which is his monthly radio address broadcast on the last Sunday of every month.