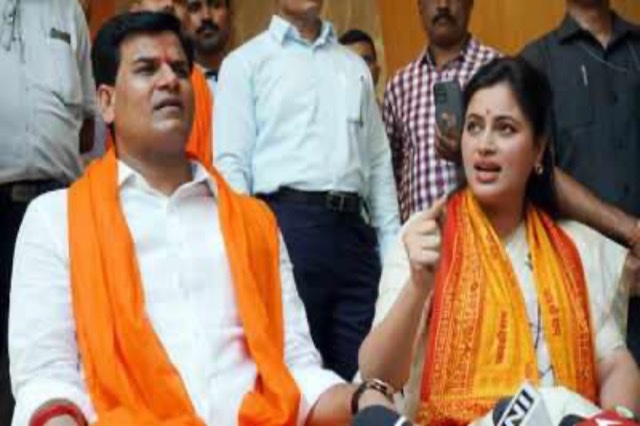 Amravati MP Navneet Rana and her husband MLA Ravi Rana were arrested by the Mumbai police from their house in suburban Khar on Saturday evening amid high drama, hours after the couple cancelled their plan to recite the Hanuman Chalisa outside Maharashtra Chief Minister Uddhav Thackeray's private residence 'Matoshree'.

The Ranas were booked under IPC section 153 (A) (promoting enmity between different groups on grounds of religion, race, place of birth, residence, language, etc., and doing acts prejudicial to maintenance of harmony), and section 135 of the Mumbai Police Act (violation of prohibitory orders of police), the police said.

BJP leader Devendra Fadnavis, speaking in Nagpur, said the Shiv Sena-led Maharashtra government's way of handling the entire episode was "very childish". The state government tries to hide its failures by terming the situations it can't handle as BJP-sponsored, the former chief minister said. "If allowed, the Rana couple would have gone there (Matoshree), recited Hanuman Chalisa and returned without creating any news. I don't understand why so many people had gathered at several places as if they (Rana couple) were planning some attack. What kind of politics is this?" the BJP leader said.

While announcing that they had dropped their plan, the couple had said the decision was taken as PM Modi is visiting Mumbai tomorrow and they don't want any law and order situation to arise. Shiv Sena workers celebrated outside their residence by distributing sweets. Sena workers had gathered in large numbers outside the apartment of the Rana couple in Mumbai this morning, and shouted slogans after they announced their decision to recite the Hanuman Chalisa outside 'Matoshree'. The Shiv Sena workers broke through the barricades and tried to enter the premises of the legislator couple's residence in Suburban Khar, however, the police brought the situation under control and stopped the Shiv Sena workers from going further.

Both Navneet Rana and Ravi Rana are independent legislators from the Vidarbha region in Maharashtra. Police have increased security outside 'Matoshree' and placed barricades on the road leading to the Thackeray residence to avoid crowding. Police personnel were deployed outside the couple's apartment as well after Shiv Sena workers staged protests and dared the couple to step out of their residence. On Friday, Mumbai police had served a notice to the couple, asking them not to disturb the law and order situation in the city. Besides 'Matoshree', the police have also increased security at 'Varsha', the official residence of Uddhav Thackeray in south Mumbai. However, unfazed by the Shiv Sena's ire and notice by Mumbai Police, the couple said they were firm on their plan.

"Maharashtra Chief Minister ordered Shiv Sena workers to heckle us. They're breaking the barricades. I'm reiterating that I'll go outside and will chant Hanuman Chalisa at 'Matroshree'," said Navneet Rana. Navneet Rana's husband Ravi Rana slammed Uddhav Thackeray over the issue of idealogy claiming that the Maharashtra Chief Minister had deviated from the ideology practised by Shiv Sena founder Bal Thackeray. "This is not the same Shiv Sena that Balasaheb Thackeray formed. That Shiv Sena would have allowed us to chant Hanuman Chalisa,' Mr Rana said. He alleged that Chief Minister Uddhav Thackeray was misusing his power. "Police aren't allowing us to step outside our house. Chief Minister has given them the instruction to do so and Shiv Sena workers are trying to attack our residence," Mr Rana added. Shiv Sena workers, who have strongly objected to the politician couple's plan, have been camping outside 'Matoshree' since yesterday.

Former Mumbai Mayor and Shiv Sena leader Kishori Pednekar said, "We have accepted the challenge of the Rana couple. Let them come, we are ready to welcome them and give them 'prasad'." The party leaders accused the BJP of hatching a conspiracy to harass the Sena-led coalition government in the state and using the Ranas and Maharashtra Navnirman Sena (MNS) Chief Raj Thackeray as pawns. "They (MLA Ravi Rana and MP Navneet Rana) have challenged the law and order situation. They were prompted to do this by someone. Shiv Sena workers are here to protect 'Matoshree'," said Shiv Sena MP Anil Desai. Senior party leader Sanjay Raut described the legislator couple as 'Bunty aur Babli', referring to a Hindi movie. "People like Rana are characters in the nautanki (drama) and stunt of the BJP. People don't take this stunt seriously," he said.

Maharashtra Home Minister Dilip Walse Patil claimed that the couple's attempt to recite Hanuman Chalisa outside 'Matoshree' was part of a conspiracy to disturb the law and order situation in the state. Amravati MP Navneet Rana and her husband Ravi Rana want to tarnish the state government's image and spoil the atmosphere. What's the need to chant Hanuman Chalisa outside 'Matoshree'. They can do it at their home," said Mr Patil. 230 Comments Ravi Rana had demanded earlier this month that the Chief Minister recite Hanuman Chalisa at his residence on Hanuman Jayanti "to rid Maharashtra of crises". His demand followed MNS Chief Raj Thackeray's 'ultimatum' to the state government to remove loudspeakers from mosques by May 3.