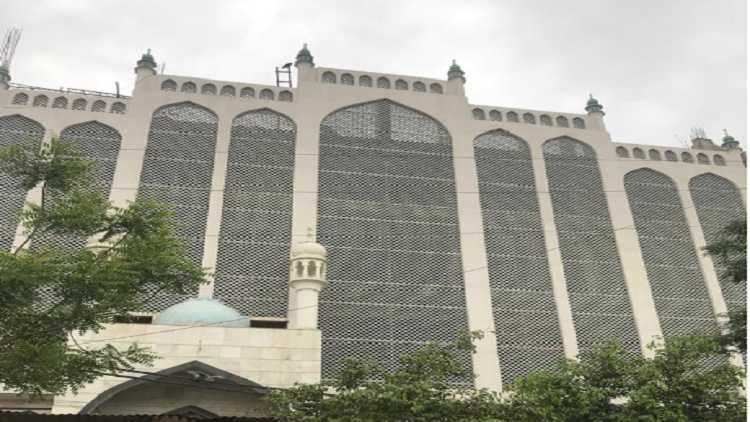 The loudspeaker in Shaheen Bagh Jama Masjid crackles and one hears the sound of azaan calling devotees to the mosque for afternoon prayers. Devotees are far and few between. The curfew coincides with Ramzan, the holy month. So the namaaz must be offered even with restrictions.

Outside Shaheen Bagh Jama Masjid only a single devotee is sitting alongside an enclosure near a water tap line doing wazu (absolution). Immediately after his wazu Riyasat puts his mask on and enters the mosque for the afternoon prayer.  The number of people inside the mosque has also been controlled. 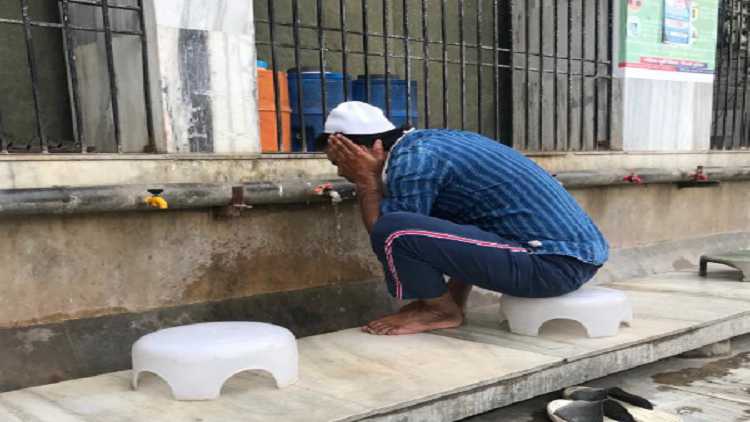 The usual humdrum, maddening traffic of this area is nowhere to be seen, but there is controlled and essential movement of the people.

On a normal day the mosque would have been crowded with people washing their body to purify themselves before the prayers. Apparently the maulvis have issued strict instructions that people should do their wazu at their home before coming to the mosque to offer namaz. This has been done  to encourage social distancing.

The devotees have also been told to just say their farz (mandatory) prayers in the mosque and remaining nafil they can say at their home. This has also shortened the time of prayers and reduced the chances of exposure.

There is very little police presence in the area but the fear of the pandemic has instilled a kind of self-discipline among the people. More than the police, people of this locality have begun to fear Coronavirus.

There are three hospitals in the area Holy Family, Max and Al-Shifa, which is a not so big local hospital. But all three are totally packed with corona patients. In case of any medical emergency there is no place to go as people of this area don’t wish to venture far away. 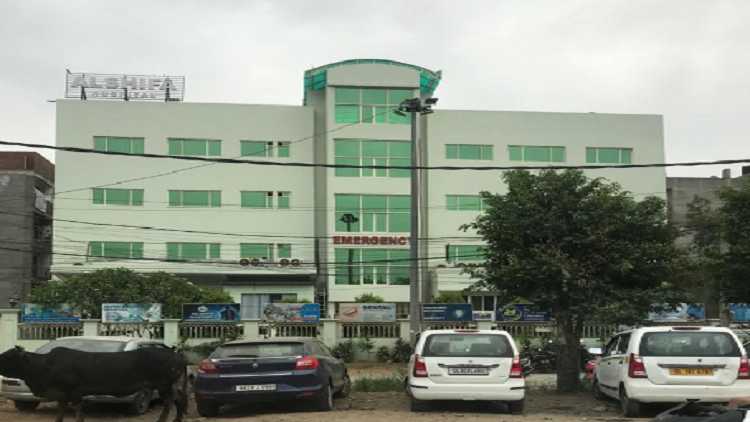 People returning to their native places: 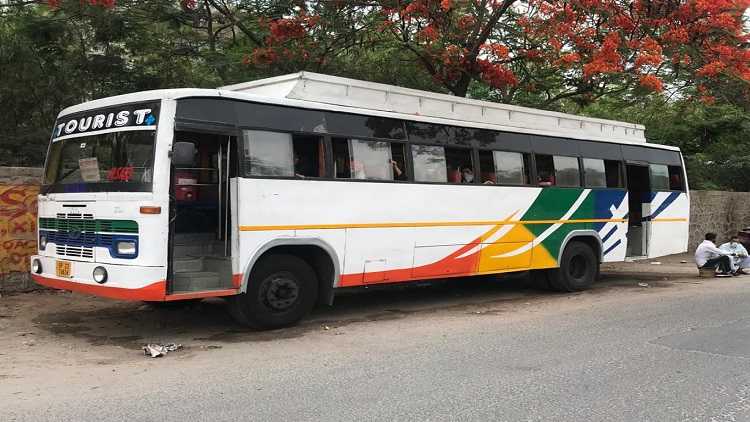 Private Bus near the Mosque

Not far away from the mosque some private buses have been lined up, some people with their belongings are approaching the waiting buses. Those buses are plying to transport those daily wage earners, who wish to return to their loved ones for a week during the curfew. For some returning home is a necessity for others an opportunity just to meet the relatives. 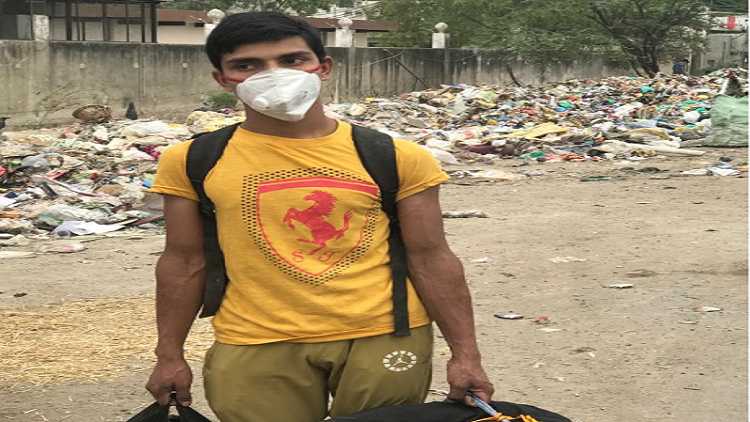 Fukran leaving for boarding a bus to his hometown in Bihar

Take for instance Furkan, a young man who was working in a dhaba, but since the curfew the dhaba owner has told Furkan that he will not be able to pay him wages anymore. So Furkan is going back to his native place Purnia in Bihar. “I don’t have a choice, very soon I will not be left with any money to eat food,” he says. 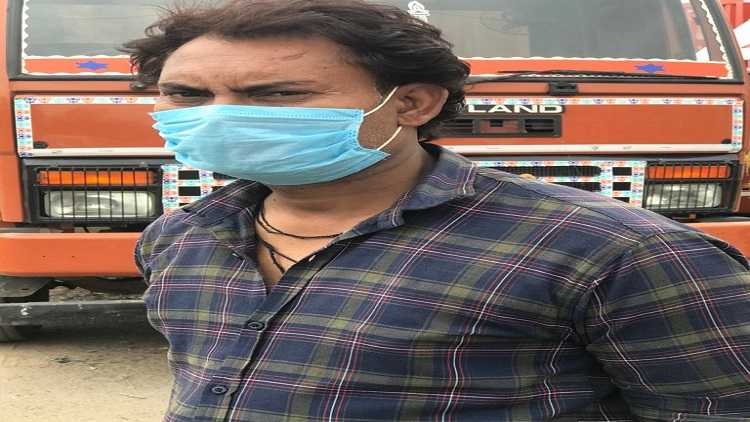 Nadeem is ready to return to Smbhal, UP

Another person Nadeem has been living with is his family in the area, two little daughters and wife. He is returning to Sambal, his native place in UP. “I used to work in a hair salon called Ohio in Sector 50 Noida. Yesterday the owner told me he will pay me the half salary, which would be Rs 7,500. This will make my survival tough, I have to pay house rent of Rs 4,000,” he says.

Most people living in this Muslim dominated area are either street vendors or skilled labour, the prevailing sense among most, especially those living in the vicinity of 200 kms is that the curfew have brought them to a standstill, they might as well go home and meet their relatives. They could always come back as and when curfew is called off. 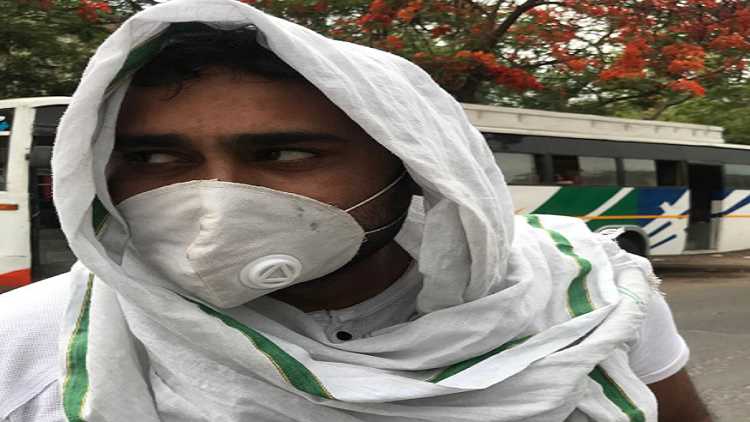 Interestingly the rush of those who wish to migrate was not there on Tuesday. In fact Sarfaraz, who runs a private bus from Shaheen Bagh to Bijnaur doesn’t even have enough passengers. There are just four of them in the bus, he says. 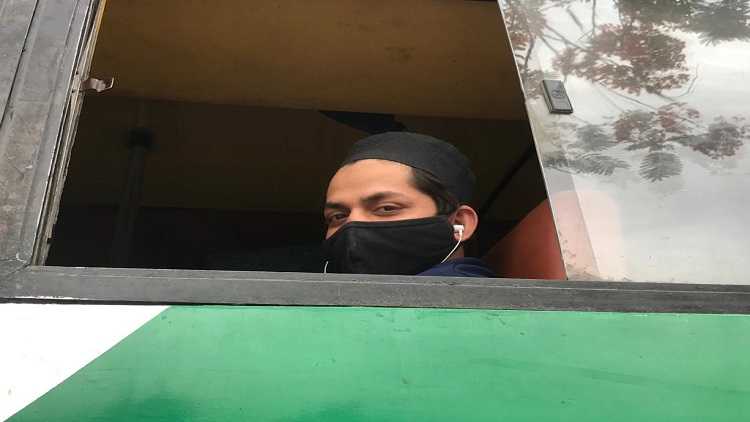 Young man who works at a local barber shop

One of the passengers is a young boy, wearing a black cap sitting at the window seat hoping that the bus would move soon. On being asked why he was returning, he said: “I was working at a barber shop now it has closed down, so I must go back.”

So Sarfaraz is having second thoughts on whether to ply the bus or not. Not enough passengers and plying the bus would be a loss making proposition. He says in the last two days some thirty buses have already gone and those who wanted to return went back. Now there are barely any passengers left.

Life is tough but not as bad

This time around the curfew is not as severe in terms of movement as it was last year, since essential movement has been allowed and police is also taking a human approach rather than implementing the curfew in its strictest sense. Perhaps this time around people also are behaving more responsibly. 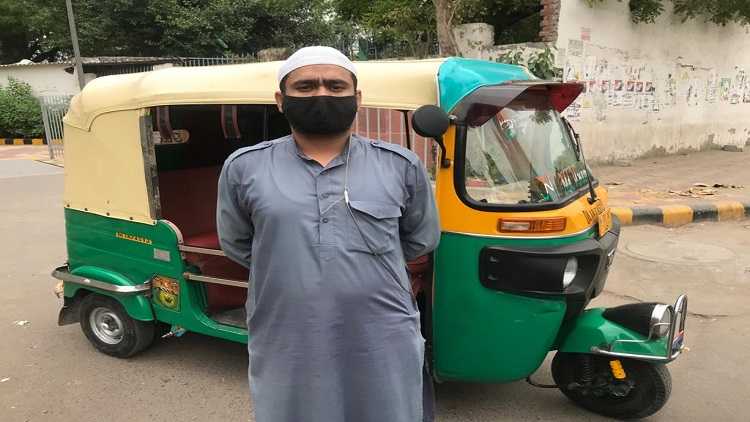 Noor, an auto rickshaw driver waiting for passengers near Okhla Vihar Metro Station, says, he has been working as usual and most passengers he is getting are either those who are exempted and going to work or those who wish to get their oxygen cylinders refilled. On being asked if he would carry any corona positive patient, he replied: “Of course I would. It is important to help people. Tomorrow I could be corona positive too.” 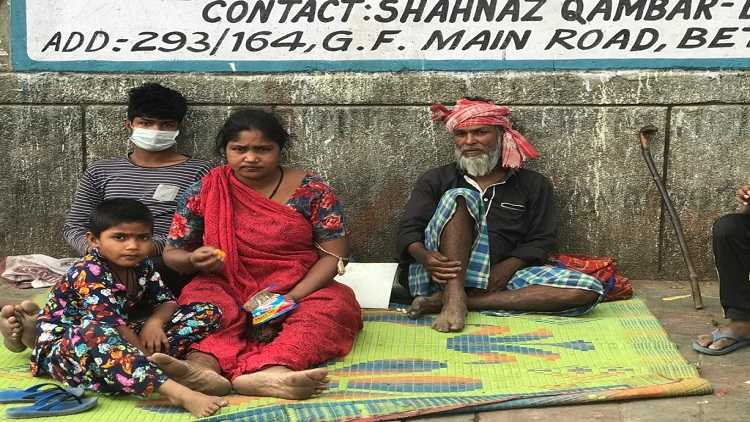 Saifullah with his daughter and her children

As one traverses through the Okhla Village towards Jamia Milia University one finds all medicine, grocery, fruits and vegetable shops are open as visual. Barely 100 meters short of the University main gate, which has a desolate look, one finds a gathering of Saifullah, his daughter Sakina and their relatives. All squatting on the footpath, waiting for alms but due to the restricted movement of people they aren’t getting any charity even during Ramzan. They are oblivious of the need to even wear a mask, for them priority is to ensure they have food for tonight. They are not wearing their mask as passersby will not be able to see agony on their face. Surprisingly, the Muslim charity organisations which were so active in curfew last year are conspicuous by their absence.

Largely people in this area are behaving responsibly and ensuring social distancing. However if the curfew is extended then it would certainly be tough on every one.