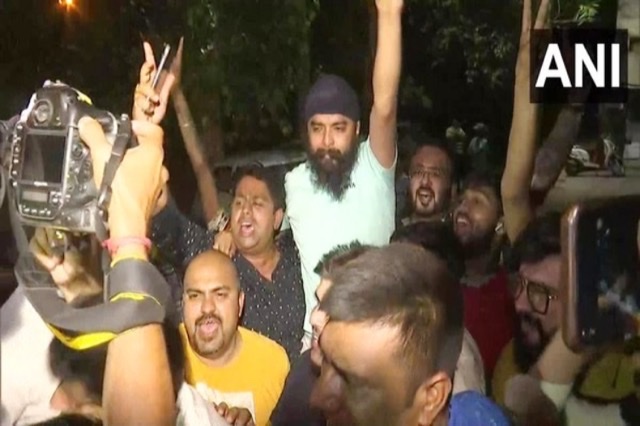 Bharatiya Janata Party (BJP) leader Tajinder Pal Singh Bagga reached his residence in Delhi on the intervening nights of Friday and Saturday after he was detained by Punjab Police in national capital yesterday.

While talking to the mediapersons outside his residence, Bagga expressed his gratitude to the Haryana and Delhi police and BJP workers for supporting him.

"Those who believe they can do anything with the help of Police, I want to tell them a BJP worker will not be scared of anyone. I thank Haryana and Delhi Police and all BJP workers for supporting me. Delhi Police has filed FIR & people concerned will be punished," Bagga told the mediapersons.

Bagga was arrested by Punjab Police earlier today from Delhi. On their way to Mohali, the team was stopped by Haryana cops after the Delhi Police registered a kidnapping case based on a complaint by Bagga's father. Haryana Police surrounded the Punjab Police car carrying Bagga and escorted them off the highway to a police station in Kurukshetra.

The Punjab cops were detained. At the same time, the Punjab and Haryana High Court turned down AAP-ruled Punjab's demand that Bagga remains in Haryana instead of being handed over to Delhi cops. Haryana Police acted on a request from the Delhi Police which rushed to a court for a search warrant based on the kidnapping complaint.

With the search warrant in hand, a team of Delhi police reached Kurukshetra and "rescued" Bagga and brought him back to the national capital.