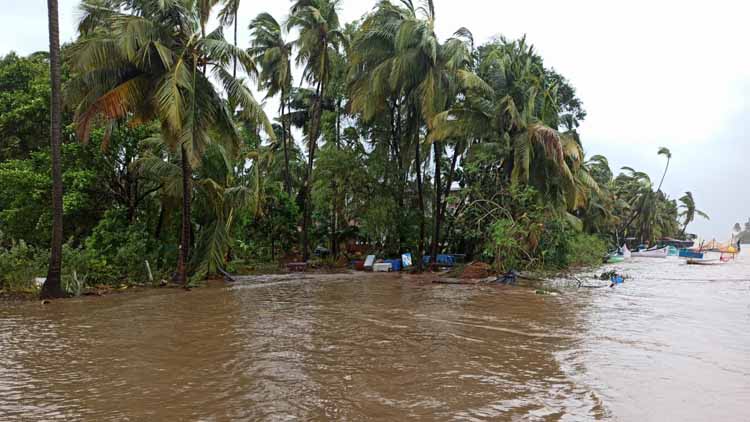 A view of Goa coast battered by cyclone

Six persons died in separate incidents across coastal and central Karnataka due to heavy rains and gusty winds triggered by Cyclone Tauktae over the last 24 hours while 15 fishermen of Kerala who were reported missing along with their boat have been located and all are safe.

Of the six who perished in the rain-related incidents, two drowned when their tugboat capsized on the high seas in Dakshina Kannada district.

"Out of eight persons in the marine vessel, two drowned and three swam to the shore, while three are missing. Search is on to trace and rescue them," state Revenue Minister R. Ashoka said in a statement here.

According to Kerala MLA P.A. Mohammed Riyas, the fishing boat with 15 aboard, which had sailed from Beypore in Kerala's Kozhikode from May 5 and was declared missing as there was no contact with it for the past couple of days has been located off the Mangaluru coast and fishermen are safe.

Riyas, who is elected from Beypore, told media persons that he got information from the Kerala coastal police that the boat, "Ajmer Shah" is anchored off the Mangaluru coast and all the 15 fishermen on the boat are safe.

Strong winds and high tides in the Arabian Sea were hampering the rescue operation by the National Disaster Rescue Force (NDRF).

"Weather permitting, we will fly a helicopter to locate the 3 missing in the sea and airlift them to the shore at the earliest," Ashoka said.

In the other incident, a fisherman died near Karwar in Uttar Kannada, as he was towing his boat to the shore when another boat floating in the sea crashed on him from behind due to strong winds and heavy rains.

In the second incident, a farmer was electrocuted in his farmland near Udupi when he came in contact with a live wire that fell in his field due to gusty winds.

In the third, a middle-aged man died in Chikkamagaluru district when the tiled-roof house in which he was sleeping collapsed due to heavy rains, while a person died due to lightning in Shivamogga district while he was taking shelter during the rain.

Moderate to heavy rains and gusty winds caused sea erosion along the west coastline and inundated low-laying areas in the affected districts.

In a related development, nine persons were stranded when a Coromandel tug got stuck near Mulki rocks abutting the seashore in the Udupi district.

"We have asked the Indian Coast Guard to rescue the stranded sailors," said Ashoka.

As the cyclone intensified and moved northwest towards Goa and Maharashtra, heavy rains and high tidal waves lashed the coastal districts in the southern state.

The districts affected by the cyclone are Dakshina Kannada, Kodagu, Udupi and Uttara Kannada on the coast and Chikkamagaluru, Hassan and Shivamogga in the Western Ghats.

"We have evacuated 516 people from the affected areas and sheltered 253 of them in 10 relief camps set up in the 6 districts. Over 200 houses were damaged. About 3,000 electrical lines have been damaged in 98 villagers across 20 taluks," said KSNDMC Commissioner Manoj Rajan in a statement.

According to the Indian Meteorological Department (IMD), 240 mm rainfall was recorded at Kollur in Udupi; 190mm each at Kota in Udupi, Puttur in Dakshina Kannada and Hosanagar in Shivamogga distict; 170mm at Kundapur in Udupi and Bhagamandal in Kodagu, and 160mm at Bhakta in Uttar Kannada district.

"As a fallout of the cyclone, heavy rains and thunderstorms are forecast in the coastal districts and many parts of the south interior and north interior regions of the state over the next 48 hours," said the IMD in its weather bulletin.

Fishermen have been warned against venturing into the sea due to gale wind speed reaching 70-80 kmph and high tidal waves along and off the west coast.