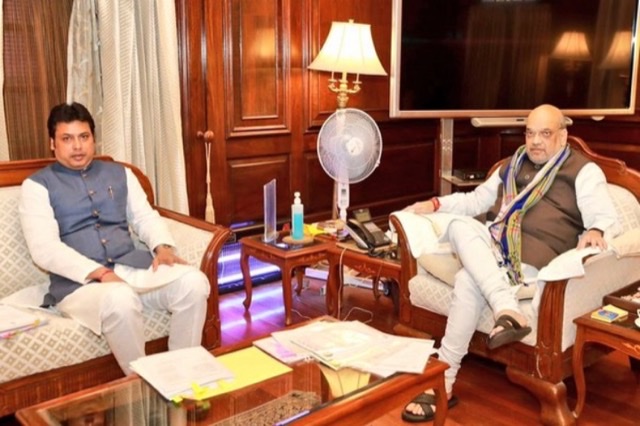 After decades of waiting, internally displaced Bru people in Tripura have started to live in their permanent houses constructed under the quadripartite Bru resettlement pact signed in the year 2020. The Tripura Chief Minister also discussed the issue of Assam Rifles and was assured of all possible help from the Central Government by Shah.

"The land issue of Assam Rifles was also discussed. He assured all help from the central govt. Much gratitude to him for his continuous support for the development of #Tripura," he added.

The Supreme Court recently rebuked the Tripura government for not handing over the title of 121 acres in Agartala city to Assam Rifles, which has been in its possession since 1951. The court was hearing a suit filed by the Union of India against the Tripura government over a piece of land in possession of Assam Rifles, measuring 121.358 acres at Mauja Bhati, Abhoy Nagar.

This land was transferred to Assam Rifles by a Presidential Order in November 1951. It has since remained with them.