Jawahar Lal Nehru and Sheikh Mohammad Abdullah (Archives)
Aasha Khosa
The 76th anniversary of India’s Independence could end the dilemma of many Kashmiri freedom fighters who lived anonymous lives and were deprived of their right to freedom fighters' pension and other privileges for their services to the nation because of the frayed relations between the then popular Kashmiri leader Sheikh Mohammad Abdullah and New Delhi.
75 years of Independence

For seven decades, Kashmir’s tumultuous history anchored to the now gone “special status” and New Delhi’s interaction with a few political families as against the common people, has led to many blunders, injustices, and denial of rights. Freedom fighters of Kashmir – who participated in the “Quit Kashmir movement” in 1932 and were entitled to the pension, are among the wronged Kashmiris.

As things stood back in 1972, Sheikh Mohammad Abdullah was in jail in the Kashmiri Conspiracy case and the National Conference had declared Delhi as “Kashmir’s number one enemy.” So, When the time for filing applications for the pension scheme came, the National Conference issued a boycott call to its cadres.
Back then, NC was the only dominating party in Kashmir and its writ ran across. Many of the freedom fighters who had led protests in the anti-Maharaja campaign led by Sheikh Mohammad Abdullah, were in dire need of financial support and above it the honour it brings, had to follow the party diktat or they would be labeled as ‘traitors.” 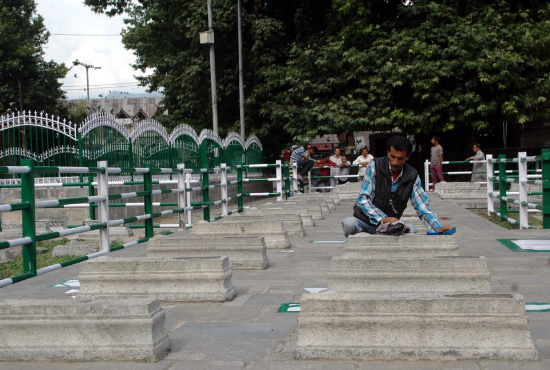 Martyers graveyard in Srinagar where those killed in 1931 riots are buried
I once met a tailor in his rickety shop in a narrow alley of Srinagar downtown. He refused to divulge his name to me because of the fears of terrorists – the then dominating force. He narrated his story of following Sheikh Mohammad Abdullah like a demigod in his younger days and joining protests against the Maharaja’s rule.

The 1931 agitation in Kashmir started with a prison revolt in Srinagar in which 22 prisoners were shot dead by the State Forces. As Sheikh Abdullah was highly influenced by Indian national leaders like Mahatama Gandhi and later Jawaharlal Nehru, his movement in Kashmir was influenced by the Quit India movement.

Later, the Indira Gandhi government launched a scheme to honour the freedom fighters of the Indian national movement that included several sub-regional movements like the Quit Kashmir movement.
However, the tailor master told me under the party orders he too didn’t fill the application. “I am told many undeserving people filled the forms; some of them were toddlers back then when the Quit Kashmir movement happened,” he told me.

This development seemed normal till one day, the tailor master realized that Sheikh Mohammad Abdullah was being released and reinstated as Chief Minister of J&K. His idol had patched up with Delhi and signed an accord with Indira Gandhi, who had acquired a larger-than-life image with India winning the war with Pakistan and creating Bangladesh by dividing Pakistan under her leadership.

“By now, people like me had become pragmatic and when we saw Abdullah cultivating Delhi and Congress leaders, I realised my folly. For years common Kashmiris became emotional fools and gave up their rights as we were made to believe Delhi is our permanent enemy."
It was three years after some 32000 freedom fights across India had started receiving monthly pensions and other facilities. for Tailkor Master and many of his peers, the reality of real politics had dawned late.
Also Read: When Chorus of 2000 Madrasa students echoed across LOC

Not only did Sheikh rule as Chief Minister, and his two generations also did the same with his son Farooq Abdullah and grandson Omar Abdullah evening becoming ministers in the center but freedom fighters like tailor master in the downtown shop continued to live in relative poverty and denial of rights.