Amidst a row of highend shopping malls in south Delhi's busy neighbourhood of Saket, an ancient-looking Fort like structure looks quaint. It's one of the most sought after office spaces in the capital. Not many know that the creator of this off-beat place is Aamir Raza Husain, whose artistic abilities go beyond recreating period buildings and spaces. As an acclaimed theatre person he has received Padma Shri for his contribution to Indian theatre.

“This was a barren piece of land that I was alloted as a honour by the Government of India in 2000…this Qila (fort) is a colourful legacy of my imagination…”, says Aamir Raza Husain, 65, while speaking with Awaz-the Voice in an exclusive interview.

Clad in a white Kurta-Payjama that gels well with his snow white disheveled hair and beard, Aamir Raza Husain sits in his office in the Qila (as people call it) that stands as an amalgamation of ancient architecture and modern-day lifestyle.

The stone building transports a visitor to the medieval times, but Aamir says, “It’s been 22 years and the work is still in progress…the bricks resembling old stones are brought from Rajasthan…while the basic idea is mine, my architect Sushil Agarwal knows how to sync my ideas into reality…” 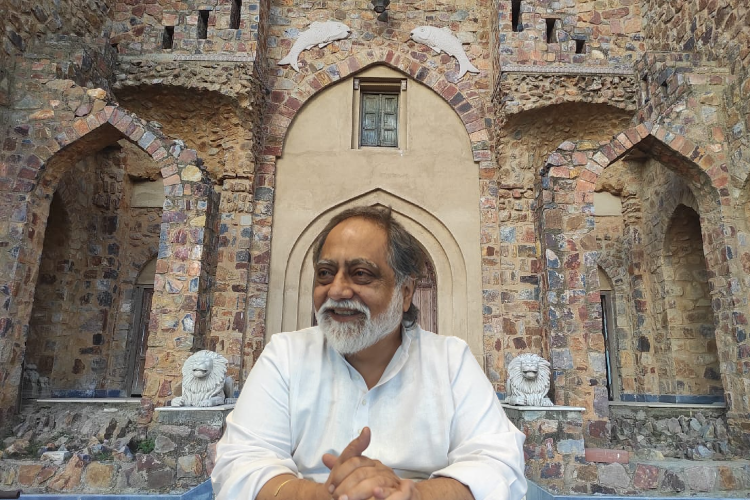 Among the business world, the Qila is also known for its co-working spaces that goes by the name Innova8. Companies like BBC, Ekank, Coloressence have offices in the building whose walls are inscribed with historical paintings while the ambience reminds you of cozy modern day closet filled with history, comfortable chairs, bean bags and sofas.

Aamir says that this fort is a tribute to his ancestral roots, “My mother was the daughter of the Raja (the then king of a small estate) of PirPur, a small town of modern day Uttar Pradesh…” As this reporter quipped that he is then an aristocrat, Aamir Raza looked out from the French windows at the Select City mall, modern day shopper's favourite stop, and said: “Well, yes you may say so, but it was all in the past…I have had a great childhood…and my memories of Awadh, Delhi are that of a magnificent architecture…thus this artwork..this fort..is my tiny effort of bringing back lost glory amidst the constantly changing world…”

Remembering his mother, Kaniz Mehdia, who passed away in 1990, Aamir says, “She was a magnificent strong, loving lady who travelled the world, I was very close to her, she taught me the ways of the world, she was a true feminist in every sense…”

Reminiscing a funny incident he says, “Once my mother was paid a visit by a neighbourhood chachi (a slang for nosy woman), she was complaining about me and a lady friend of mine smoking..by chance that day the girl was also in the house, my mother known for her wit and quick temper called my friend and in her quintessential style and said, “Darling, would you light a cigarette for me please..”, that nosy neighbour never interfered in my life ever again..” 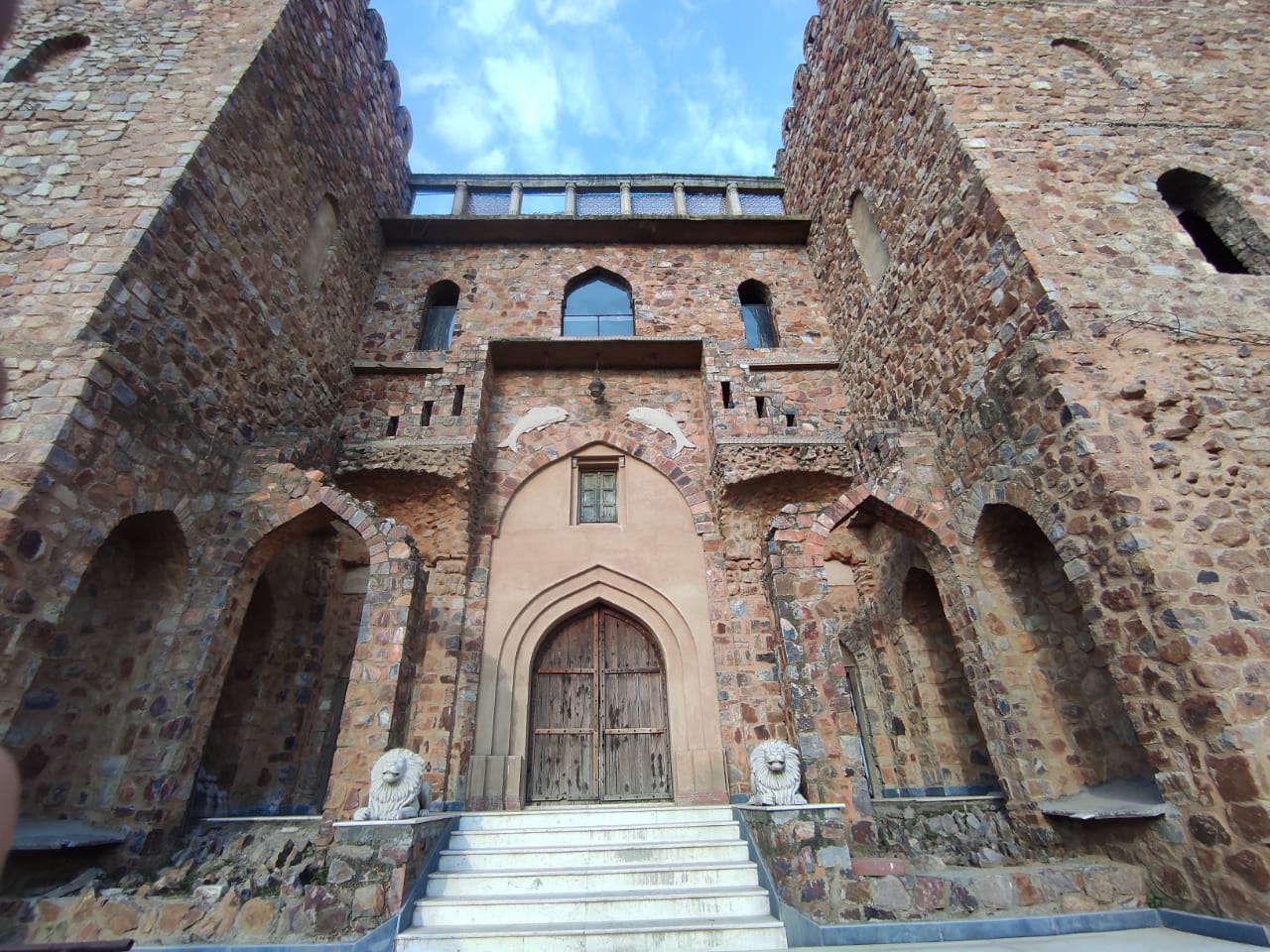 According to the grapevine there’s a huge line of companies who wish to rent office space in the “Qila”. Currently the structure is under construction, “it's been a long long time...as of now the only project on my mind is finishing up the state-of-the-art auditorium…”

Breaking his glance from the outside he nonchalantly calls the tall buildings “kachda” (trash), “the buildings I grew up amongst are nowhere to be found…thus I decided to create something of my own…”, he adds.

But this is not all to the aura and charm of Aamir Raza Husain, back in the early nineties when producers were scared of creating movies worth crores Aamir Raza created history by investing at least Rs 1 crore in many of his outdoor stage production. His magnum opus includes the likes of The Legend of Ram, The Fifty Day War, Chaudvin Ka Chand festival -where the plays covered a historic 2km stretch between Red Fort and Fatehpuri Masjid, Satyamev Jayate, Saare Jahan Se Achcha, 1947 live, One into Two and many more. His group has even performed at the Rashtrapati Bhavan (President House) for the President of India, Shankar Dayal Sharma and APJ Abdul Kalam respectively. 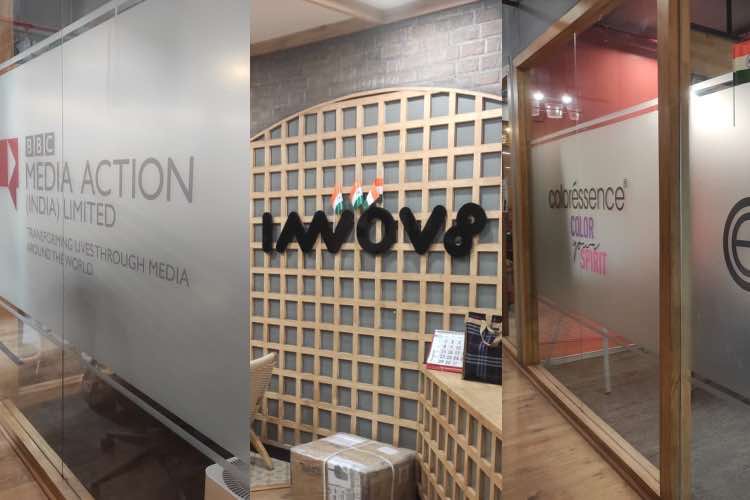 Co-working Space Innov8 having many offices

His theatre group Stagedoor Productions is known for their humongous stage designs and execution of the acts with over 100 artists on the sets. The audience sat on the podiums supported by the hydraulic machines and rather than curtains falling and scenes changing, the spectators with help of technology travelled from one scene to the other.

This all happened some three decades ago when technology was slowly finding its feet in the life of common man. As to what inspired him to design his play in a manner similar to Broadway theatre, Aamir points his index finger to his forehead and in his theatrical demeanour says, “it all comes from here..and I’d like to think I did a better job than Broadway…”; laughing a hearty laugh and lightening up his cigarette he adds, “The Legend of Ram is a story about cities..Ram travels from Ayodhya to a Jungle to Lanka and then to Ayodhya again…I just thought what if my audience also traveled in the same manner..through cities..what if I could make audience experience cathartic…it was an idea..also I am grateful to Allah for my success, I owe my ideas to him…”

Owing to the everyday challenges like controlling lights, music and the precise moments of sifting the podiums in the early 90's Aamir says, “there weren’t any mobile phones, pagers or walkie-talkies…we commuted by lighting up match sticks..once a cast member was lighting a cigarette and the other cast mistook it to be his que and explosion happened…” ; again a hearty laugh and he adds, “that was fun..the audience never knew the difference, they took it as a part of the play itself..”

Inspite of having used special effects in his plays Aamir firmly believes that the crux of theatres is good actors, good story, strong scripts and meaningful dialogues, “you can’t get away with bad actors..finding good actors is really tough and in the end the director ends up compromising…”

After the pandemic there has been a paradigm shift in the way entertainment is perceived. With theatre shows receiving audiences in full swing, cinema audiences are preferring OTT platforms to a great extent. Theatres still is perceived as a hobby in India with hardly any allowances provided to the actors, “It is not just in India, theatres are a limited activity all over the world with their major capital being Westend-London and Broadway-New York, especially for English theatres, Broadway and Westend are confined to just one geographical area..they can be called the capitals of the theatre in the west…”, Aamir says. 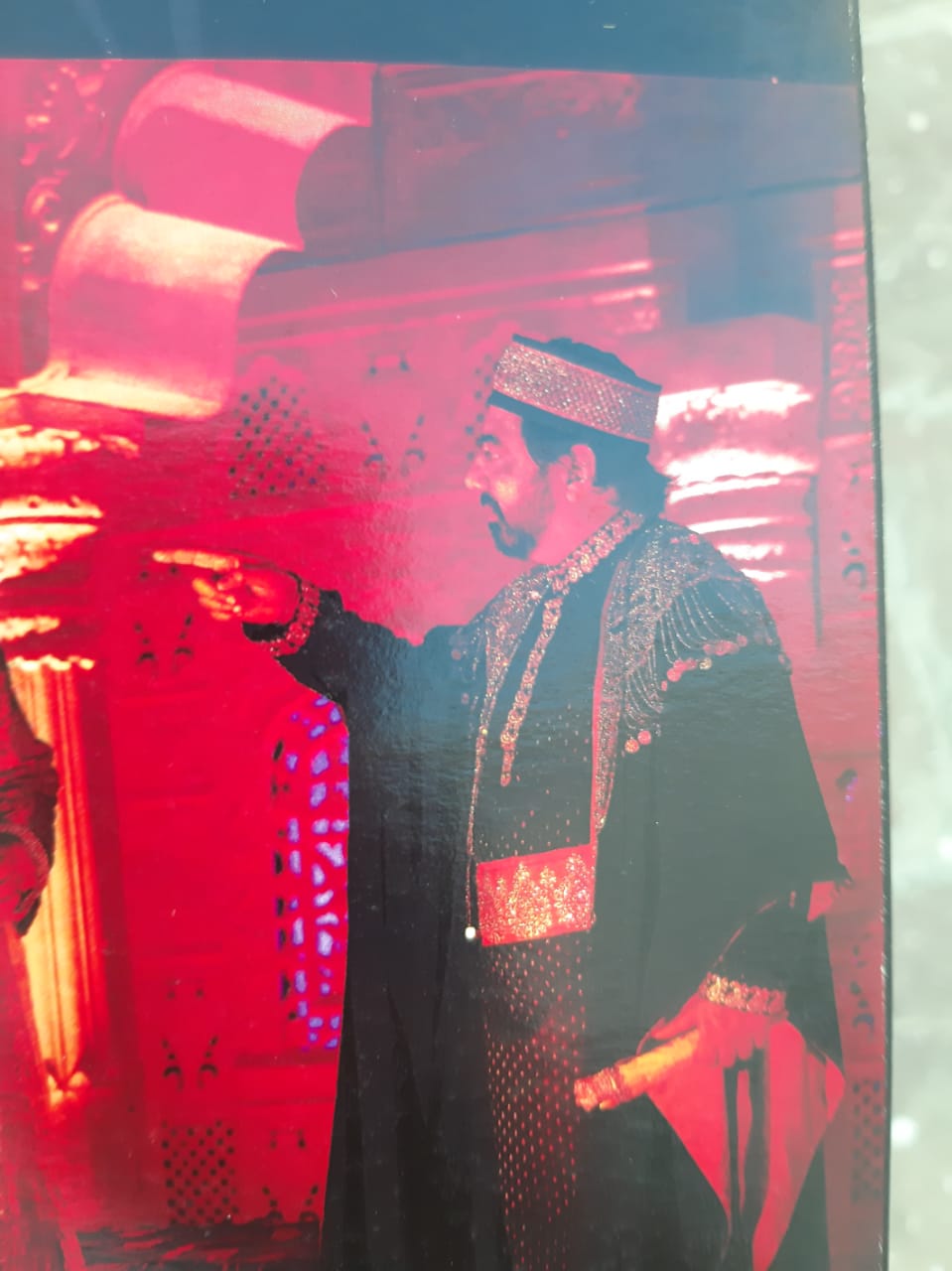 Aamir in his play as one of the character

He firmly believes that not only actors but humanity as a whole suffered during the pandemic, “the west has people on dole (monthly allowances for the unemployed), here that is not possible due to the population..but sufferings are common to all..”

Commenting on the pitiable condition of the actors in theatres Aamir says, “Situation is grave everywhere the only difference being that in India actors do not get money thus they have made it a hobby and in abroad they do not know anything apart from acting thus they are penniless…”

Aamir says that actors are dime a dozen, “There is a dearth of good actors…acting is a very tough job but today everyone wants to be an actor, this leads them in getting no work in cinema or in theatres and the whole community gets a bad reputation of having no work..” He recalls having auditioned around 1000 actors once for a production but in the end he went with just two to three, “Often I have paid less to actors from abroad...situation is almost similar everywhere, therefore a shortage of jobs…”

With four decades of theatrical career a cinephile may expect to see him in films as well but on the contrary Aamir has just done two feature films namely Kim and Khubsoorat, the reason being, “I do not do films, the camera fails to excite me, I am more of a live audience human, I like to see my audience reacting to the situations, I like to make them laugh, cry and awestruck with my performance…theatres is an addiction...and I guess I have always been in love with the live stage…”, he adds while rummaging through his files.

Coming from an aristocratic family of Awadh Aamir could have taken up any profession then why theatres, he in his larger than life attitude says, “..because I am lazy…”, the answer was followed by a hearty laugh following which he says, “my mother was very supportive, she used to sponsor me..”

Aamir’s childhood was majorly spent with his maternal family as his parents were divorced, “my mother signed the divorce papers the day I was born..." 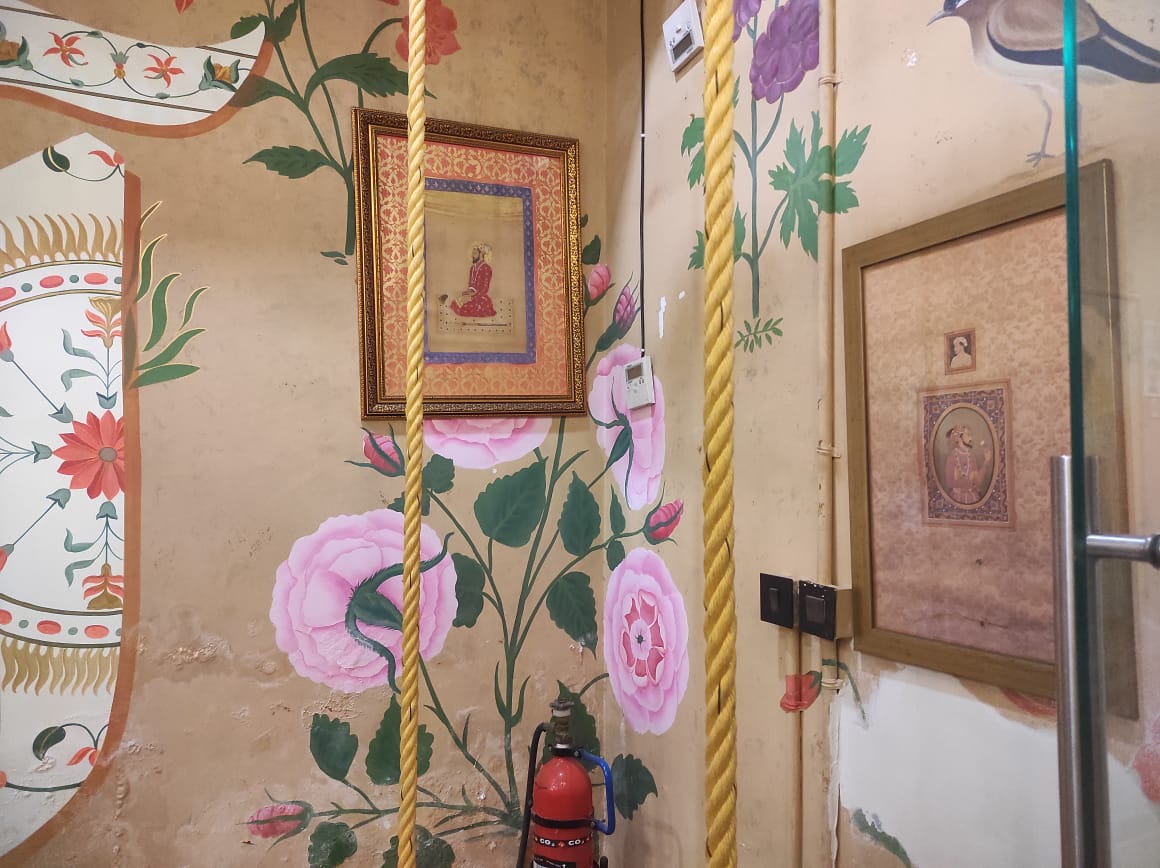 Aamir's efforts to keep ancient culture alive in his qila

"I knew my father little, he was an engineer, and he worked in America…” Calling his father a lucky fellow he says, “He designed the water works for Mecca-Medina while working for the company called Bechtel…he is buried in the graveyard of Medina…”

He fondly says, “my mother brought me up and it was a life of leisure…nobody works in our family…I am the only one who is burning the midnight oil..” Sharing anecdotes from his childhood days he says, “it was all about food, poetry, ghazal recitations…there were huge discussions about variety of kababs, what goes well with shorbas…”

Aamir Raza Husain is famous for throwing his soirées, he says, “at times when I am not working I revive those cuisines with my chefs…I invite people over, we break bread and talk about the lives and times of Indian history, architecture, poetry, poets and what not…” Aamir says he doesn’t wish to break away from the past, “our era was different, and the culture is what I miss the most..”

Aamir says that on a personal front he loves Dr.M Sayeed Alam’s Ghalib In New Delhi, “I loved Sayeed there, all the other actors were pathetic…Feroz Abbas Khan’s Mughal-e-Azam is a masterpiece and I never miss his plays when staged in Delhi..” Being old school he says, “plays today are sub-standards and I do not like disrespecting them by walking away in the interval…thus even when I go to watch them I sit in the last row…it is easier to stage an exit from there..”

He winds up by saying that, “time has not changed in the theatre world…technology has definitely augmented the shows in terms of lights, sound systems, graphics and much more..but theater was never easy and can never be easy..even in the next 100 years to come…”