The Lanesborough, London, announced the latest in its innovative series of seasonal afternoon teas, inspired by the hit Netflix show 'Bridgerton'. Created in partnership with Netflix and Shondaland, the limited-edition tea will pay homage to the Regency era; a time of great revelling and high style, of elegant parties, balls, and grand dinners, with a contemporary twist.

Launching on March 25, the Bridgerton Afternoon Tea will take place in The Lanesborough's richly decorated dining room, naturally illuminated during the day by a domed glass roof while seductively aglow under softly lit chandeliers in the evening. A Regency icon in the capital, beneath the original skydome there is bas-relief artwork meticulously cast from 250 different mouldings, and Wedgwood china mounted on the walls, evoking a sense of Regency neoclassical grandeur.

The Queen's Diamond - dedicated to the star of the season, to celebrate great revelling and high style. Exquisite hand-crafted chocolate blended with honey, green cardamon and white chocolate ganache, displayed in a beautiful jewel-coloured ring box, is a nod to Edwina Sharma, this season's diamond. 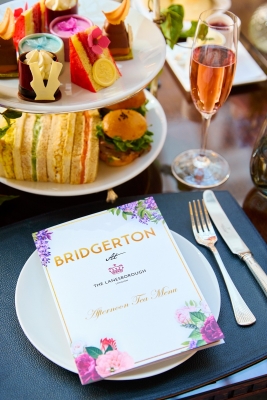 The Rake - in honour of Viscount Anthony, The Rake is a cake of distinction - a real big spender - good looking and refined. A dandy white shirt enveloped in a crisp tailored suit with a dashing cream cravat, the delectable cake is a chocolate sable with milk chocolate mousse and a burst of whipped passionfruit curd centre. It is finished in a dark chocolate glaze, chocolate shard collar, and a whipped passionfruit cream Chantilly cravat.

The Lady Whistledown - a nod to Lady Whistledown, the narrator and high society columnist in Bridgerton, this cake is reflective of her inkpot and quill. Inside is a pistachio nut financier and pistachio mousse, coated in milk chocolate and cocoa butter. All is Fair in Love & War - the star of the show sitting atop the cake stand, All is Fair in Love & War celebrates the Bridgerton family and is pale blue in colour, embossed with a bee - the symbol of Bridgerton.

The concept roots back to the earliest known origin of the sentiment 'all is fair in love in war', found in poet John Lyly's 1579 novel, Euphues: The Anatomy of Wit. This dessert is to share between two; a rosewater cheesecake with a burst of raspberry jelly in the centre, on a crumble crunch base coated in sprayed-blue white chocolate. The question is, who gets the biggest slice? After all, All is Fair in Love and War.

The Pall Mall Cocktail Inspired by the original Regency Gin Punch, the essential cocktail that formed part of quotidian social life during the Regency period, The Lanesborough's Head of Bars, Mickael Perron has created The Pall Mall cocktail; a refreshing recipe combining Hendrick's gin & Graham Blend No5 white port, balanced with citrus and subtle sweetness. The delectable concoction is served in an elegant high glass teacup, with a tea strainer filled with dried hibiscus flowers to infuse the drink with a pinkish colour. Finally, the cocktail is garnished with a floating lotus flower arrangement - the national flower of India that occupies a unique position in Indian culture - another nod to the Sharmas.