Kashmiris praying at the Shrine of Sheikh Noorudin Noornai at Sitharan in Budgam (Pics: Ehsan Fazili)

Thousands of devotees participated in the two-day Urs of Sheikh Noor-ud-Din Wali, founder of Sufi Islam in Kashmir, in the remote Sithaharan village of central Kashmir, where he is believed to have stayed for meditation and prayers for 12 years.

Sheikh Nooruddin Noorani also known as Nund Rishi and Alamdar-e-Kashmir was born at Koimuh in South Kashmir in 1377 A.D. and passed away in 1438. His mausoleum is located in the center of a town called Charar-e-sharif.

The annual Urs at Sitharan is celebrated on 27th of Rabi ul Sani, according to the Islamic calendar. Devotees sit for a night-long special prayer to seek the blessings of the Sufi saint, whose following remains intact across the Valley and religions.

Locals come and deposit money in the box, they also bring rice and place it on the window of the shrine. The most sought-after blessing of the shrine is yellow rice (tahiri) which is being distributed as tabarrukh (sacred souvenir)

“Thousands of people from around the village and far off attended the annual Urs,” said Ghulam Mohiuddin Sheikh, Chairman of the adjacent Jamia Masjid told Awaz-the voice. 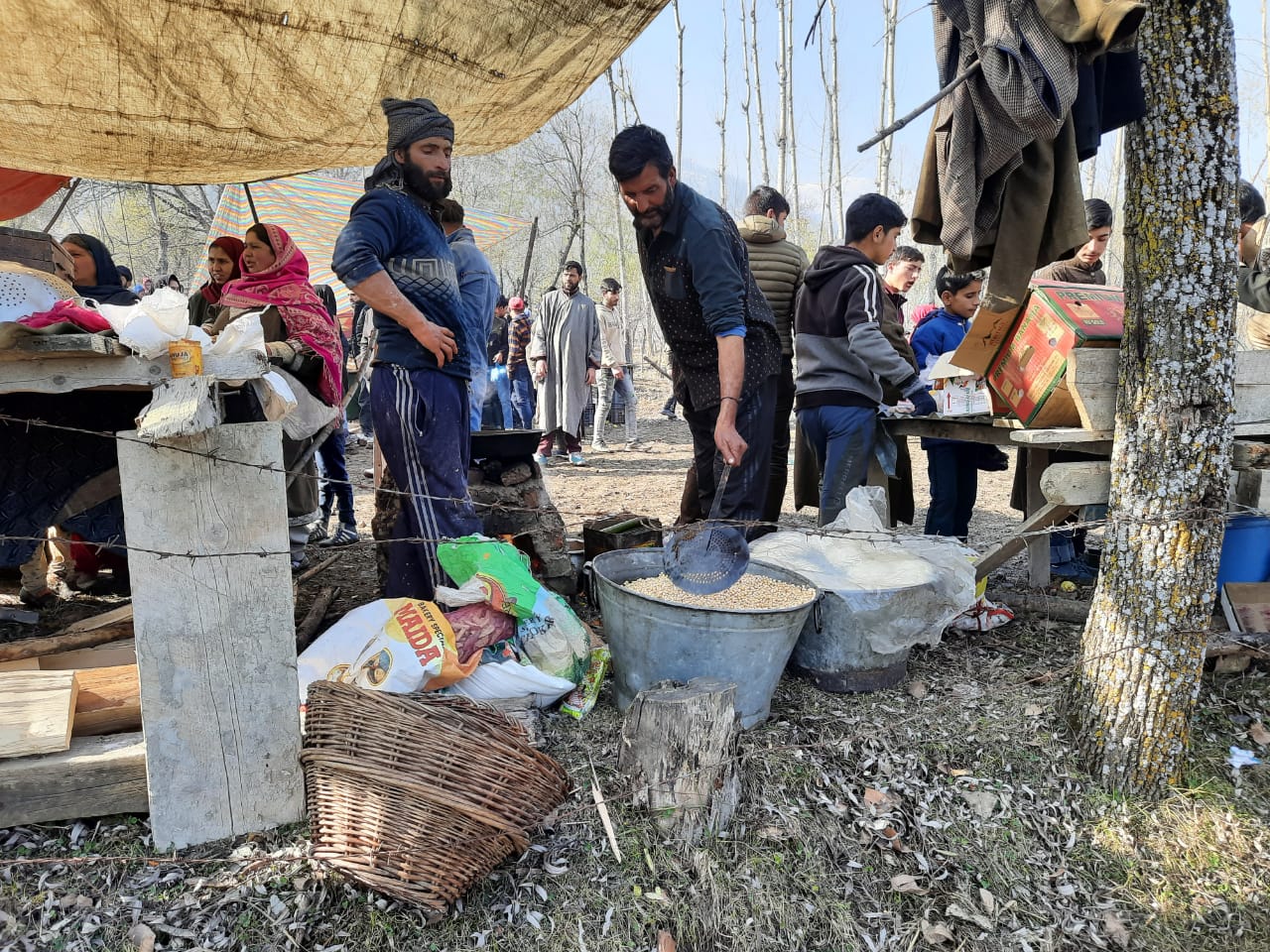 Food being cooked for devotees at the shrine

Locals who are mostly into farming offer cash at the shrine and deposit it in the tin box placed there. They also bring small and big bags of rice and hand them over to the caretakers or simply place them inside the shrine.

The offered rice is sold and the proceeds are used for the development and refurbishing of the shrine.

Many families also carry bucketfuls of Tahari, rice cooked with turmeric, and the pilgrims are given handfuls of warm rice as tubrukh, the food blessed by the Saint.

Pilgrims seeking the tubrukh is the most humbling scene for a first-timer at the shrine festival.

More than 10,000 people from adjoining villages had converged at the small shrine for two days. They included a large number of women and children.

A month earlier, the main Urs of Sheikh Nooruddin Wali was celebrated at the more famous shrine at Char-e-Sharief, on the 26th day of Rabi-ul Awal.

“This is the place where Sheikh-ul-Alam spent 12 years offering prayers (Ibadat)” and that is why people continued to offer special prayers at this shrine, Ghulam Mohiuddin Sheikh said.

There are several other places around in the area that the Sufi Saint had visited and are revered by the locals, he said.

There is a legend behind the origins of this spring. People believe that as Sheikh-ul-Alam lived on karevas (plateaus during those 12 years one day he went out in search of water for ablution.

Finding no source of water, he dug his walking stick into the ground and a spring came out. 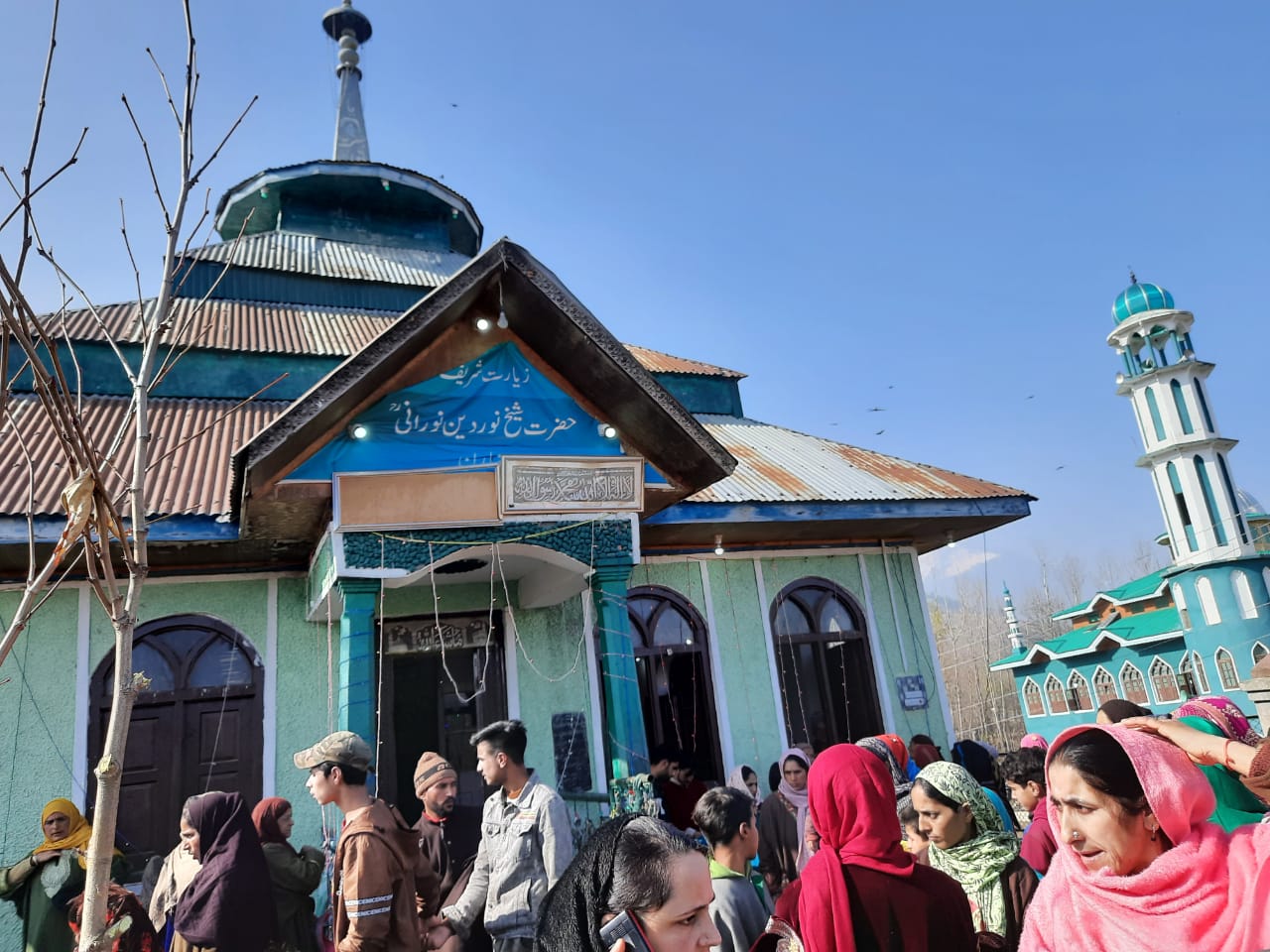 The shrine at Sitaharan

The spring is thus seen as being blessed by the Alamdar-e-Kashmir. The locals believe that spring water has medicinal value. People with skin disease take a dip in the spring and get cured.

The shrine of Shik Nooruddin at Sitaharan also encapsulates the memory of the 14th-century Sufi, Syed Sharfuddin Abdul Rehman Shah, from Turkmenistan, popularly known as Bulbul Shah in Kashmir. He too had visited the area during his stay in Kashmir. Currently, the shrine is under construction.

Bulbul Shah is known for introducing Islam first in Kashmir by inviting and converting the Buddhist King of Kashmir Rinchan Shah also known as Sadruddin Shah.

Interestingly, the village is a Ramayana site ad it is named after Sita wife of Lord Rama. No wonder “Sita Naag” or Sita’s spring is located less than 200 yards from the place shrine of Nund Rishi.