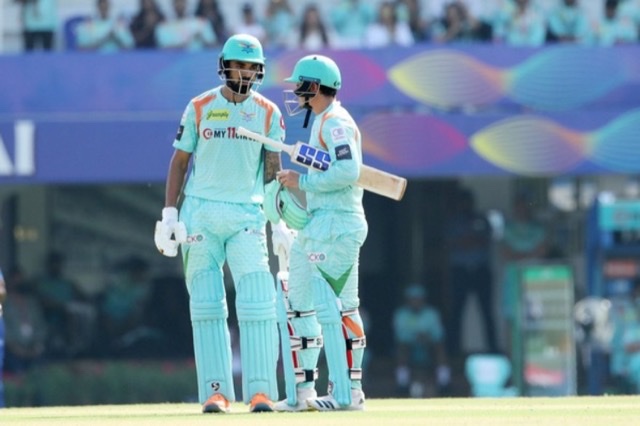 Lucknow Super Giants skipper KL Rahul expressed disappointment over the loss against Royal Challengers Bangalore and said that his team "could have done better".

"I think we started really well, after getting 2 wickets in the first over and then give away 50 in the powerplay, we could have done better. 180 on that pitch was 15-20 extra runs we gave away, we couldn't really squeeze in the middle and with the bat as well we needed one in the top three to go deep and the other batters to bat around him and unfortunately we couldn't do that. We have a really good team, very happy with how we are playing, yes a couple of games we could have done better," said KL Rahul in a post-match presentation.

"I think we started well against Rajasthan and here as well we put them under pressure but we couldn't sustain for much longer. Everyone has chipped in and everyone looks in good form and everyone scored for us. Important that one or two guys who have a good day they need to dig in and take the team through," he added.

Chasing a 182-run target Lucknow Super Giants did not get the best of start as they lost their wicket-keeper batter, Quinton de Kock, for 3 in the third over dismissed by Josh Hazlewood. Hazlewood struck again as Lucknow lost their second wicket in the form of Manish Pandey for 6 to leave LSG at 33/2. Krunal Pandya and captain KL Rahul batted well to take their team beyond the 50-run mark in the seventh over.

The biggest jolt Lucknow got when they lost their in-form skipper KL Rahul as Harhal Patel dismissed him for 30 off 24 balls. Deepak Hooda joined Krunal Pandya in the middle and both helped Lucknow cross the 100-run mark in 12.2 overs. In the next ball, Hooda was dismissed for 13 by Mohammed Siraj.

In the next over they lost Krunal Pandya who scored an impressive 42 off 28 balls as LSG lost half of its side for 108. Hazlewood took his third wicket of the match dismissing Ayush Badoni for 13 as Lucknow were left in trouble at 135/6. Marcus Stoinis with his powerful blows kept his side in the hunt. But Hazlewood cleaned him up to end LSG's hope for any comeback.

Jason Holder hit some lusty blows to take his team's total beyond the 150-run mark. Harshal Patel dismissed Holder to take his second wicket of the match as Lucknow Super Giants lost the match by 18 runs.