As the 1930s were drawing to an end a Muslim graduate woman from Isabella Thoburn College, Lucknow applied to the Department of History at Aligarh Muslim University (AMU) for admission in master’ as the University had opened its gates to women. Until then women students were allowed in Womens’ College, 2 km away from the main campus.
She was shocked to receive a reply from Professor Mohammad Habib, a famous Historian, that she could not be admitted because the department was surrounded by Boys’ Hostels and had no ‘properly veiled’ backdoor for women. Professor Habib, in that letter, advised her to take private exams.
The woman was Hamida Salim, whose elder sister Saifia, mother of Javed Akhtar, was already teaching at AMU. Her brothers Asrar ul Haq Majaz and Ansar ul Haq Harvani were progressive poets and freedom fighters respectively. The resilience ran in her blood. She would not accept defeat.
Hamida applied for admission in the Department of Economics and secured admission. In this manner, she became the first Woman Post Graduate Student of Economics at AMU. In this department, even after securing admission, her journey was not a cakewalk. 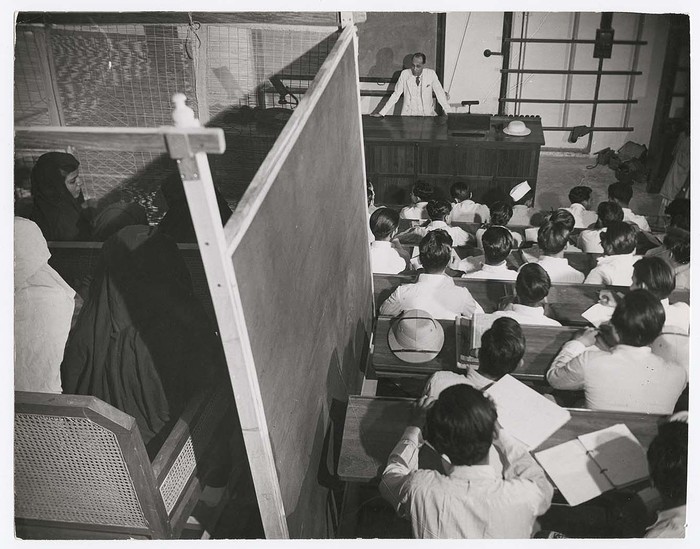 The divider acts as a purdah between men and women in an AMU class
In her Urdu autobiography, she recalled that at that time AMU allowed women in Masters's programs under strict purdah (veil). The girl students had to travel in heavily veiled horse carriages from Hostels and enter classrooms through separate doors as the classrooms were partitioned with a huge veil to separate male students and teachers from women. The partition was so huge that nobody would know if she bunked the classes after putting in attendance because no male, including the teacher, could see her.

Hamida recalled that she was not allowed in the University Library or the Department Library. She had especially thanked her two classmates, Abu Salim, and Hamza Alvi, for smuggling books and journals to her on a highly segregated campus. She wrote, “Even under those circumstances if I could study any Economics then I am grateful to my class fellows Salim and Hamza Alvi. If they got hold of any good book or journal it would reach me. I am also grateful to the peon of our department, who would occasionally inform me that the Seminar Library was deserted of male students and I could take books from there. In a hurry, I would stand in front of Almirahs and try to gaze at those books.”

Hamida later married this helpful classmate, Abu Salim. She wrote, “Even after so many restrictions, I married a man of my choice.”
After completing her M.A in Economics, as the first female post-graduate of the subject from AMU, Hamida also pursued a teachers' training and joined Karamat Husain College, Lucknow as a teacher. In her view, “This was the dream come true moment for us. Now we could stand independent of male support, which, in our view, was the necessary condition for the true emancipation of women.”
Also Read: Hindu Muslim Unity on Ram Navami led to Jallianwala Bagh Massacre


Later, Hamida taught at Lucknow, AMU, Jamia Millia Islamia, and several other universities, and wrote extensively before leaving the mortal world in 2015.