An Afghan infant in diapers who was tossed up the concertina rimmed concrete wall of the Karzia International Airport in Kabul by his mother and lapped up by an American soldier on duty has since been handed over to his father.

This announcement was made by the US army on Twitter. 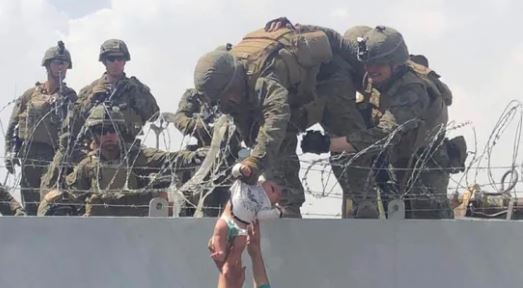 A US marine identified as Sgt. Isaiah Campbell is seen holding the baby and looking at him affectionately. His picture and the story of the infant being reunited with his father, who had managed to enter the airport for flying out has also been shared by the US Marine on Twitter.

"The parent asked the Marines to look after the baby because the baby was ill, and so the Marine you see reaching over the wall took it to a Norwegian hospital that's at the airport. They treated the baby and returned the child to the child's father," US defense department's spokesperson John Kirby said on Friday.

"It was an act of compassion," Kirby said adding that it was the only such instance that he was aware of. It was an act of professionalism on behalf of the soldiers there. He added that he is not aware of where the baby is now, because they were handed back over to their father after receiving treatment.

The video clip of an unidentified Afghan woman throwing up her baby to get him out of the country where the Taliban have taken control, has gone viral on the internet raising questions about the situation in the country.

Reports have said that desperate Afghan women were seen throwing their babies over the razor wire of the Kabul airport compound. A senior British officer told Sky News that they can hear people shouting as tens of thousands of people have been crowding the Kabul airport to get out of the country and escape the Taliban. It was terrible, women were throwing their babies over the razor wire, asking British soldiers to take them, some got caught in the wire. I'm worried for my men, I'm counselling some, everyone cried last night," the senior British officer said.

At least 12 people have been killed since Sunday in and around the Kabul airport, according to Nato and Taliban officials. The Biden administration has faced criticism for its chaotic withdrawal from Afghanistan. On Friday, US President Joe Biden confronted criticism about his administration's planning for the withdrawal of US troops and the Taliban's swift takeover of the country.

I have seen no question of our credibility from our allies ... As a matter of fact, the exact opposite I've got ... we're acting with dispatch, we're acting, committing to what we said we would do," Biden told reporters after making a speech from the White House. The act showed the desperation of the women about themselves and the future of their children