Refugee Marwah says Taliban is yet to show its tyranny Marwah and Firdaus sitting in a park of Lajpat Nagar
Shaista Fatima/New Delhi
Marwah’s father was serving the Afghan Army when for the first time Taliban rose to power in Kabul in 1996. She remembers her father being abducted and tortured by the Taliban, “We didn’t see Abba for 11 months; he was freed with the help of a mediator and since that time we have been living in shadows.”
Marwah in her early thirties is among the Afghan refugees who have managed to fly out of their homeland and reach Delhi. Living with her Afghan friends in South Delhi, Marwah’s mind is reliving the moments of the first takeover of her country by the Taliban 20 years back.
She recollects the days when her family was called infidels. “We were labelled kafirs and blacklisted…”
Marwah told Awaz-the Voice that back then her sister was forced to marry a Taliban fighter and she, as a six-year-old, was forced to wear hijab (a scarf wrapped around the head), “The women weren’t allowed to leave their houses, even during a medical emergency the male members had to seek the permission of Taliban.”
The women who disobeyed them were persecuted publicly. “They are like zombies; they just want to portray their spectacle of power”
The jean-wearing Marwah is a quintessentially modern woman. She was studying in Kabul and aspiring to work eventually to be able to afford a good life for herself. Though she reached Delhi a fortnight ago, days before she would be taken away as the bride of a Taliban, much like her sister and so many other women in the hinterland, fear is still writ large on her face.  “I was in Kabul when the Taliban invaded Mazar-e-Sharif.” 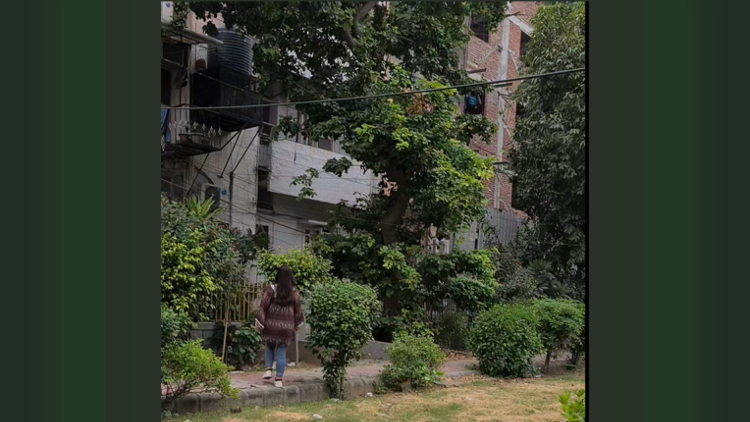 Marwah going to her Lajpat apartment
For apparent reasons she didn't want her family name to be publicised; she also refused to be photographed.
Her brother is in the Afghan Army and is currently in hiding, “They are hunting for anyone who went against them at some point; my family is living in great fear, they cannot stay at one place for long..”
She adds,” Once I came to know about the Taliban were about to take over Kabul, I just ran away, I had some savings and paid 415$ for my visa and 240$ for the ticket.”
Firdaus, a young man in his mid-twenties, has been staying in Delhi for the past three years. He accompanies Marwah around Delhi. “Taliban is the reason why I fled my country, it is peaceful here…” he says.
Firdaus dreams of becoming a doctor someday, “I had to resume my studies from the scratch, then this COVID took away the remaining hopes from us, time is passing by, it’s been three years now, we request the government to give us a job and if not then at least help us in moving to a third country…” 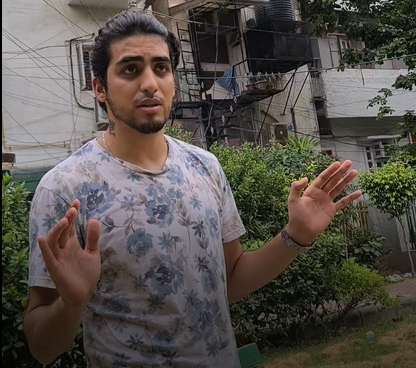 Firdaus sharing his story with Awaz the Voice
When asked as to why Afghans fear the Taliban since both belong to the same country, Marwah and Firdaus say “Taliban are not Afghan, there are Pakistanis, or maybe from China but not fully Afghan..”
Both are livid with their country’s former President Ashraf Ghani who has taken shelter in the UAE, “My President sold my country; we are stranded; what do we do now..” Marwah said.
Marwah is highly obliged to the Indian Government for giving her and people like her refuge,   “We are thankful to the Indian government for help, but all we want is a normal life, higher studies, a job, we do not want to be a burden on anyone…”
Marwah says she fears the worst in the coming days, “Taliban is yet to show their true colours…”
The United Nations is yet to accept the Taliban as a functioning government. Marwah says this is the reason, “they (The Taliban) are keeping a low profile, but they will surface…”
Firdaus says, “I was very young when the Taliban attacked, my friends and relatives are still there…”,
Firdaus used to work as a translator here but due to COVID all has come to a standstill. “UNHCR gives us a letter when we come here, they promise us everything but we get nothing…”
When asked about the current situation in Kabul, Firdaus says, ”Bomb blast and suicide is normal for us, earlier it was in a hidden manner but now it will be done more openly, there is no going back…”