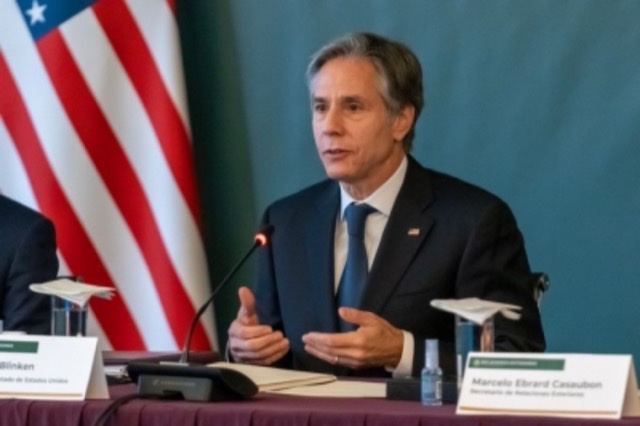 US Secretary of State, Antony Blinken has said the US is considering taking "action" against countries that are not enforcing its Ukraine-related sanctions against Russia but, he added, it will take a more indulgent approach towards those among them that are "rethinking" their relationship with Moscow, sometimes going back over decades. Blinken on Thursday did not specify what shape or form that action would take but there have been suggestions of secondary sanctions. He also did not name any countries in either category.

India's ties with Russia, especially its refusal to condemn the Russian invasion of Ukraine, and continued imports of Russian oil and gas have been raised by US officials along with, in one case of egregious overreach, a threat of "consequences". More generally, the US has said it does not want to see India jack up its import of Russian energy beyond past levels because of discounted prices on offer.

"It's much better, in the first instance, if we can get any countries in question to voluntarily make sure that they're joining us in implementing the sanctions and not allowing them to be evaded," the Secretary of State said at a hearing in the House of Representatives in response to a question about countries that are either "hedging their bets" on Ukraine-related sanctions or are allowing them to be evaded. But the US is also "looking at" using authorities that it has to "take action against those that are not" enforcing the sanctions. Blinken went on to say that a number of countries "are rethinking their relationships, including their relationship with Russia going forward, and some of them had relationships with Russia going back decades, including at times when we couldn't have the same kind of relationship with them and now we can.

With these countries, he added, the US needs to "make sure that we are helping advance that transition and doing it in a way that, as a strategic matter, moves things in the right direction". The Secretary of State did not name any country but he may have been referring here to India, which has had a long relationship with Russia going back decades to the time of the Soviet Union. There were times then that Moscow was on India's side when the US wasn't, including, most significantly in 1971, when America was, in fact, on the opposite side.

At a hearing at the US Senate on Tuesday, Blinken had faced similar questions about countries not enforcing the US's Ukraine-related sanctions. One senator, Chris Van Hollen, a Democrat, had suggested that the administration should consider secondary sanctions to force these countries to fall in line.

"We made the right decision by saying that the United States is not going to continue to import Russian gas and oil but if that oil is (in the) international market, and Putin is able to sell it to somebody else, that obviously doesn't do us any good at all," Van Hollen said to Secretary Blinken at the hearing.

He added: "So I guess my question is very blunt: why aren't we applying secondary sanctions against countries that are increasing their imports of Russian commodities?" Hollen mentioned only China's continued and increased purchase of Russian gas and oil, but a number of European countries -- such as Germany and others -- and India have been on the radar of American officials and lawmakers, even though India's import of Russian energy is minuscule compared to its total energy imports. Secretary Blinken had dismissed the suggestion outright. "Where we can, it is far preferable to get countries to voluntarily not engage in these practices," he said.

The Senator pressed him again: "There are countries that are taking advantage of discounted Russian oil prices and they're able to unload it at lower prices, and they're taking advantage of it, which only helps Putin." Other Senators also pressed the Secretary of State on this point although they did not go as far as to suggest they be punished with something like secondary sanctions. Most of these countries are long-time allies of the US such as Germany and other NATO countries and others are partners like India.