Cricketer-turned-politician Imran Khan finally lost his position as Prime Minister of Pakistan as the combined opposition booted him out with 174 members of the National Assembly voting in favour of the no-trust motion against his government in the wee hours.
Proving to be a bad loser, Khan chose to stay away from the proceedings of the PNA that was mandated by the order of the Supreme Court, while his party members walked out when it came to voting on the no-trust motion in anticipation of the ouster of the Imran Khan government.
With this Pakistan's record of no government being able to complete its five-year term remains intact.
Imran Khan tried his best to save his position through extraneous means and yet finally he lost the game. Pakistan Muslim League (N) leader Shahbaz Sharif is expected to be the next Prime Minister of Pakistan and reports in Pakistani media suggest he could be sworn in on Monday. Shehbaz Sharif
A desperate Imran Khan even wanted some top Army officers transferred while the National Assembly was in session but his orders were not executed, a report of the BBC said.
He repeatedly praised India for its robust and independent foreign policy at least in his four speeches in the last few days making the opposition leader Maryam Nawaz Sharif retort: “If he likes India so much, why doesn’t he shift and live in India.”
Unlike him PTI ministers like Shah Mahmood Qureshi and Interior Minister Fawad Chaudhary had seen the writing on the wall and changed their Twitter bios, adding "Former" to their ministerial titles.
The voting was conducted amid reports that the five judges of the Pakistan Supreme Court who had ordered the voting on the no-confidence motion against the Pakistan Tehreek-e-Insaaf (PTI) government had moved to the Supreme Court for an eventuality of a possible violation of the orders of the full bench.

Before the voting, the political drama went through several turns and twists. Speaker of the National Assembly Asad Qaiser resigned from his post citing his “long association with Imran Khan.” The session was then chaired by PML (M) member Sardar Ayaz Sadiq, who announced that 174 members had voted against the Prime Minister in the 342-member house. After the voting, Shahbaz Sharif said the next government would "not seek revenge from anyone."

On March 28, an alliance of opposition parties presented the no-confidence motion against Imran Khan in the National Assembly.
Later on April 3, the deputy speaker of the National Assembly rejected the no-confidence motion over the alleged involvement of foreign hands in the conspiracy to topple the Pakistani government.
The Supreme Court of Pakistan on Thursday declared the deputy speaker's action as a violation of the constitution of the country. The apex court ordered the National Assembly to summon a session of the house on Saturday and conduct voting on the no-confidence motion.
According to the procedure and rules, the house will send the result of the no-confidence motion to the country's President for approval and permission to start the process to elect a new Prime Minister.
Imran Khan sought to link the opposition's move to oust him through a no-trust vote with "foreign conspiracy" and named the United States in some of his speeches. The United States rejected his allegations. He also gave calls for people to take to the streets. The joint opposition remained steadfast in its objective of defeating him. The opposition's cause got help through dissensions from within the ruling alliance led by Imran Khan's Pakistan Tehreek-e-Insaf Party
The session of the National Assembly was adjourned shortly after it convened in the morning amid ruckus in the House. The House reconvened at around 2:30 pm (local time) and was further adjourned after speeches were made by the Foreign Minister Shah Mahmood Qureshi and several Opposition leaders including Bilawal Bhutto Zardari. 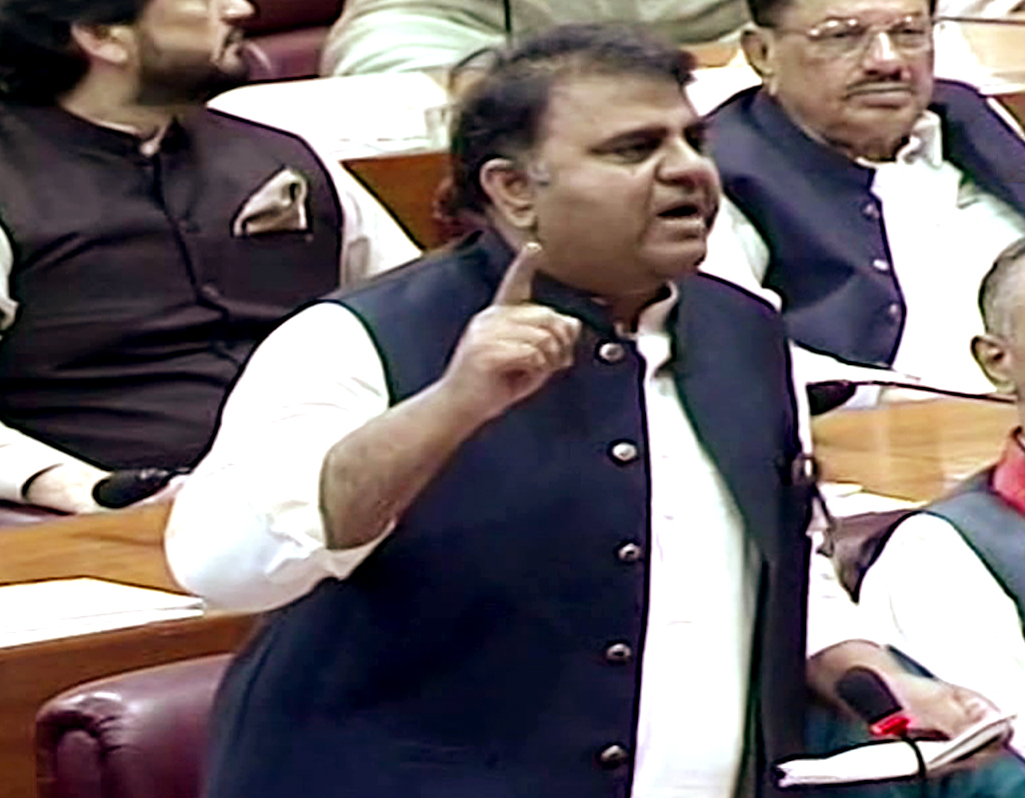 Fawad Chaudhary, Imran loyalist speaking in the National assembly before the voting
The House reconvened at around 7:30 pm, only to be further adjourned after an hour of proceedings. The Assembly was finally convened after midnight following the Speaker's resignation.
Pakistan's Supreme Court in a historic judgment on Thursday had called for the convening of the session of the National Assembly "not later than 10:30 AM on Saturday" after setting aside the April 3 ruling of the Deputy Speaker Qasim Khan Suri against the no-confidence motion on "constitutional grounds".
Declaring the ruling of the Deputy Speaker "to be contrary to the Constitution and the law and of no legal effect", the Court set aside all the subsequent steps taken, including the dissolution of the National Assembly, while also restoring Prime Minister Imran Khan and all the Federal Ministers to their respective positions as of April 3.
The court also fixed the Saturday session with the conditions that the session could not be prorogued unless the motion is voted upon, and in case Imran Khan lost the no-trust vote, the next PM had to be elected in the same session.
The PTI led coalition was formed in 2018 with the support of 179 members, with Imran Khan-led PTI's 155 members, and four major allies Muttahida Qaumi Movement-Pakistan (MQM-P), Pakistan Muslim League-Quaid (PML-Q), Balochistan Awami Party (BAP) and Grand Democratic Alliance (GDA) bringing seven, five, five and three members respectively.
Imran Khan had effectively lost the majority in the House after MQM-P left the coalition on March 30.

Also Read: PTI seeks review of SC's decision on Trust Vote
According to reports, Pakistan’s capital has been placed under tight security and AArmy vehicles are patrolling the city.