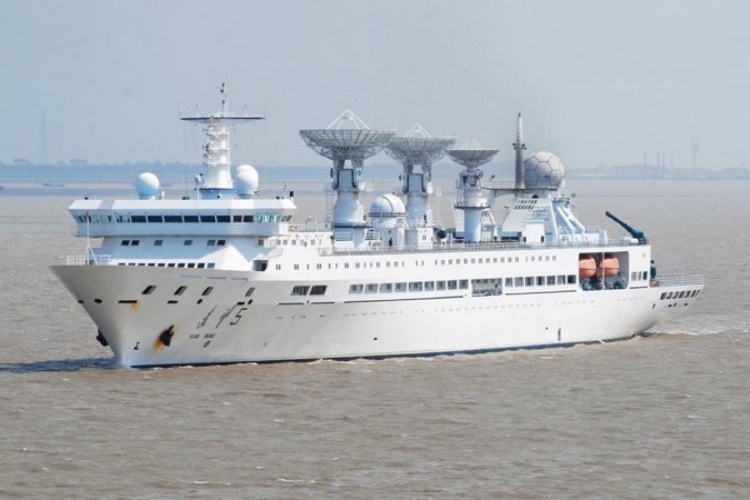 In a hard-hitting response to the remarks of Chinese Ambassador Qi Zhenhong to Sri Lanka the Indian High Commission in Colombo said on Saturday that his views were a violation of basic diplomatic etiquette and maybe a personal trait or reflecting a larger national attitude.

The Indian High Commission also said that Qi's view of Sri Lanka's northern neighbour may be coloured by how his own country behaves.

The High Commission, which made a series of tweets, also referred to Qi's remarks on the visit of a Chinese spy vessel to Hambantota port in Sri Lanka and said his imputing a geopolitical context to the visit of a purported scientific research vessel is a giveaway.

The High Commission also referred to reports of China's debt-trap diplomacy and said "opaqueness and debt-driven agendas are now a major challenge specially for smaller nations".

It said Sri Lanka, which is facing an unprecedented economic crisis, needs support, not unwanted pressure or unnecessary controversies to serve another country's agenda.

"We have noted the remarks of the Chinese Ambassador. His violation of basic diplomatic etiquette may be a personal trait or reflecting a larger national attitude. His view of Sri Lanka's northern neighbour may be coloured by how his own country behaves. India, we assure him,is very different. His imputing a geopolitical context to the visit of a purported scientific research vessel is a giveaway," the Indian High Commission said.

"Opaqueness and debt-driven agendas are now a major challenge, especially for smaller nations. Recent developments are a caution. SriLanka needs support, not unwanted pressure or unnecessary controversies to serve another country's agenda," it added.

India had earlier rejected insinuations by China that it had exerted pressure on Colombo to defer the visit of a high-tech Chinese research vessel to Hambantota port and said Sri Lanka is a sovereign country and makes its own independent decisions.

"We reject the insinuations in the statement about India. Sri Lanka is a sovereign country and makes its own independent decisions," Ministry of External Affairs spokesperson Arindam Bagchi had said at a media briefing.

Bagchi said India will make the best judgement about its security interests and it takes into account the prevailing situation in the region, specially in border areas.

The Chinese Ambassador had, in a statement, made adverse remarks about India. He also talked about scientific research activities of the vessel 'Yuan Wang 5' and said "external obstruction based on so-called 'security concerns' but without any evidence from certain forces is de facto a thorough interference into Sri Lanka's sovereignty and independence".

A report in Ceylon Today said Sri Lanka is currently negotiating a loan from the IMF said to be to the tune of USD three billion to get over its foreign exchange crisis but while the 'G7' (Canada, France, Germany, Italy, Japan, UK and the USA) countries have agreed to restructure Sri Lanka's debt, not so China. Responding to Sri Lanka's request for China to change its tune on debt relief, a spokesman for the Chinese embassy said the ball is in Sri Lanka's court, not China's.

The spokesman told Daily Mirror China communicated to the Sri Lankan Finance Ministry three months ago about its readiness to discuss how to address the debt issue with the Chinese banks. Sri Lanka's total bilateral debt was estimated at $6.2 billion at the end of 2020 by the IMF.

But during the recent crisis in the country, when for months, Sri Lanka has been pleading with China for more support, but to no avail, Channel News Asia reported. Beijing has done little to help the country through its devastating economic meltdown, providing far less aid than India.

India moved in to alleviate Sri Lanka's desperate food and fuel shortages with over USD 3.8 billion of assistance. Beijing, by contrast, provided a relatively paltry USD 74 million. While India extended a currency swap arrangement with Sri Lanka in April, the People's Bank of China has suspended its own swap line because the country lacks sufficient foreign exchange reserves.

China has also expressed a reluctance to write off its Sri Lankan loans, playing into accusations of stinginess when it comes to debt renegotiations.

China's record in this area has shown a refusal to negotiate debt relief with other creditors and a preference for engaging in secretive, bilateral loan restructurings.