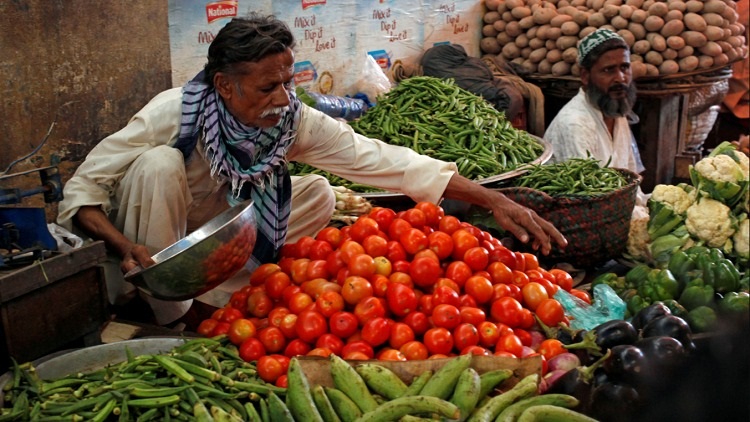 A vendor in Lahore

Pakistan's future seems vulnerable as it grapples with lower-than-expected levels of food output and is in urgent need to import key food items including edible oil, wheat, sugar, tea and pulses.

In an article in The News International, Dr Khaqan Hassan Naqeeb and Dr Yusuf Zafar write that the production of the highly-valued cotton crop has dipped to a level of a 30-year low and the productivity of the five staple crops has slipped to less than half of the world's best.

Moreover, recent supply shocks have increased food prices by an average of 31 per cent in the past 29 months.

According to a finding by the National Nutritional Survey 2018 conducted by Pakistan's Ministry of Health and UNICEF, 36.9 percent of the country's households are food insecure. Children under the five years are suffering high levels of severe stunting at 40 percent and almost 30 percent of them underweight.

A high population growth rate of 2.4 percent, inefficient use of water in the Indus River basin irrigation system; unfavorable climate changes; weak policies and regulations governing markets for agricultural inputs and commodities, all raise the concern of a marked increase in food insecurity, according to The News International.

Naqeeb and Zafar write that though Pakistan's agriculture has benefitted from the green revolution, it has however missed on the gene revolution and is currently losing out on the precision agriculture revolution.

The conditions of Pakistan's vegetables and fruit markets as well as of grain markets are in dire need of a makeover and the infestation of rodents in grain markets cannot be tolerated as a routine. The country currently suffers an irrecoverable loss of 20 to 40 per cent due to poor transportation and storage and interventions in all these areas are required to improve overall productivity.

The News International reported that with a low per capita income of USD 1,497, rising prices and high poverty concentrated in rural areas have made Pakistan struggle with issues of under-nourishment and lack of micronutrients. Limited technological innovation in farming, weak research, trade restrictions and low quality of inputs is also less than desirable.

The plight of the agriculture sector had led to insufficient availability of local production of food items and the impact of rising domestic demand. Shortages can have serious repercussions for the country's fiscal and external payments. Pressures will surmount with increasing global food prices, making the laudable objective of food security more distant, wrote the Pakistani daily.

A reconsidered focus on investment and reform of governance especially in agriculture research and regulatory public-sector bodies is also required with the involvement of all the provinces.