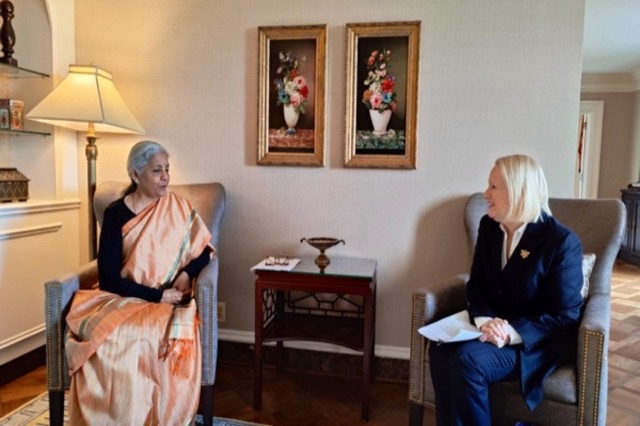 According to the Indian finance ministry, Schapiro who is also the former chairman of the US Securities and Exchange Commission concurred that it is an opportune time for India to play a leadership role in shaping global climate finance trends.

"Union Finance Minister Smt. @nsitharaman met Ms. Mary Schapiro, Vice of the Climate Finance Leadership Initiative (CFLI) and the first woman to serve as @SECGov Chair, in Washington D.C., today," the Indian finance ministry said in a Tweet. In a series of Tweets, the ministry said: "Ms Shapiro discussed the success in India with respect to building robust renewable energy markets and concurred that it is opportune time for India to play a leadership role in shaping global #ClimateFinance trends."

"Finance Minister Smt. @nsitharaman spoke about her vision of developing @GIFTCity_#IFSC as centre for attracting global capital for #sustainable #finance and asked CFLI to work closely," it added. Earlier in the day, Sitharaman attended a panel discussion at the Atlantic Council, a US-based think tank.

She said that India is one of the six countries to have fulfilled most of the commitments made at the Paris Climate Summit in 2015 and remains committed to fulfilling its renewable energy targets. Sitharaman is in Washington on an official visit to attend the Spring Meetings at the World Bank, the G20 Finance Ministers meeting and the Central Bank Governor Meeting (FMCBG). The Union Finance Minister also talked about the Indian economy, the challenges faced during the COVID-19 pandemic.

She said that the welfare schemes of the government and India's recovery plan from the economic impact of the COVID-19 pandemic during the almost an hour-long session. Sitharaman also met South African Finance Minister Enoch Godongwana in Washington DC and discussed enhancing bilateral ties between the two countries.

"Both Ministers discussed enhancing #Bilateral ties and #EconomicPartnership and exploring opportunities to increase bilateral #investment and #trade," the ministry added. In the series of tweets, Finance Ministry further informed that the Union Finance Minister acknowledged South Africa's revenue collections for the fiscal year 2021-2022. Sitharaman highlighted India's performance in the digital world and the government's efforts to build the digital infrastructure framework over the last decade, stressing the increase of the digital adoption rate in India during the COVID-19 pandemic.

ALSO READ: Twitter's board salary will be $0 if my bid succeeds: Musk

The IMF Managing Director Kristalina Georgiev lauded India's well-targeted policy mix that has helped the Indian economy remain resilient. Notably, once the meetings conclude in Washington, Sitharaman will head to San Francisco on April 24, where she will engage with business leaders and will also interact with the faculty and students at Stanford University. She will depart for India on April 27.