In its race to catch up with the modern world, Shariah-ruled Saudi Arabia is restoring normal freedoms to its citizens and allowing art and culture to become commonplace while toning down its strict gender segregation policies.

Recently the world saw filmmakers and actors from all over the world converge in Riyadh for the Red Sea International Film festival; earlier Saudis grooving to the music and dance shows of Bollywood actors like Salman Khan.

What is more interesting is the image of a gender-inclusive Musical troupe that performed “Saudi Music Masterpieces” at the Hall du Chatelet in Paris last month. Under the auspices of The Music Authority of Saudi Arabia, the Saudi National Band included both men and women singers.

According to Arab News, The National Music Ensemble was established as one of the main initiatives to achieve the Kingdom's cultural strategy in promoting cultural awareness, in line with the Kingdom's Vision 2030.

“The initiative of the National Music Ensemble aims to form a professional national band with high skills, to represent the Kingdom in musical forums locally and globally,” news reports said quoting officials.However, there is much more happening in what was once a closed Islamic country. The Music Authority of Saudi Arabia has launched a global music competition on TikTok application entitled “The Voice of Saudi Arabia”, to enable and discover local musical talents.

The Competition is open to talents from all over the world, including the Saudi Arabians.

According to Saudi news sites, so far, the Competition has received a public interaction of about 2.8 million interactions between likes, views, and comments, in addition to the participation of about 20,000 talents.

The Authority has announced 10 grand prizes to the winners who get the most votes.

Samaher Almalki, winner of the gold medal🥇in the Yogasana Championship that was held on Saturday 3rd of Dec in University of Business & Technology in Saudi Arabia, Jeddah 🇸🇦 pic.twitter.com/CSd585Jnrw According to the Arab News this was the first Yogasana Championship in Saudi Arabia and the Arab World. The competition was held at Jeddah in the University of Business & Technology on Saturday.

The most visible change is in the capital Riyadh where the drab cityscape has been changed with street art by famous and many others who were secretly honing their skills as such artworks were prohibited under the strict Islamic laws of the country.

This trend is also catching up in other cities and towns across the Kingdom. 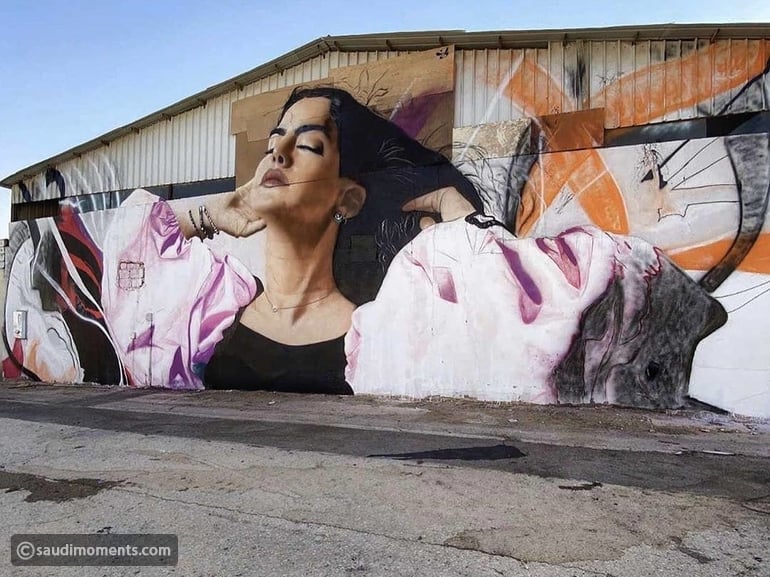 A Graffiti in a Riyadh Street (Courtesy: Saudi Moments)

According to Saudi Moments website, "A Saudi young man, who never let the realities of the world restrain his creativity, the artist who was encouraged and endorsed by the Saudi Ministry of Culture. He started as an unknown artist named Kla5 since street graffiti used to be frowned upon in Saudi Arabia, yet today he is Saudi Arabia’s own Banksy. Old buildings and abandoned places were the perfect canvas for the colors of his passion.

"He later unveiled his identity as Ali al-Nafaei and was interviewed in several Newspapers Arab News and Independent Arabia. The drawing gift has grown with him as he grew from a very young age. He admits that his field of study has nothing to do with his art, it is not what he learns but how he expresses himself, and his talents. You can reflect on the gallery of some of the most famous murals of Kla5 at Diriyah abandoned warehouses."