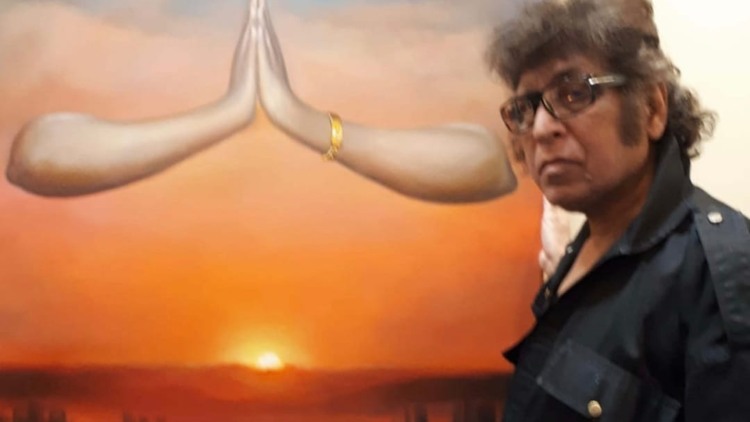 Wasim Kapoor with his work Lockdown

The uncertainty of the ongoing pandemic has a profound effect on Kolkata based artist Wasim Kapoor. He has locked his experiences and imagery of one of the crucial times that the humans faced in the Lockdown series.

Looking at his works, it seems the mind behind these is composed.

The void of people, movement and distractions is reflected in the Lockdown series. The artist immersed himself in creating the strange COVID world in his painting Lockdown 2.

Kapoor said his second creation Lockdown 2 shows how the bustling cities have turned into ghost towns due to the pandemic.

Stillness looms all over the world, there are no happy faces anymore, people are dying and we all are living in a state of fear. 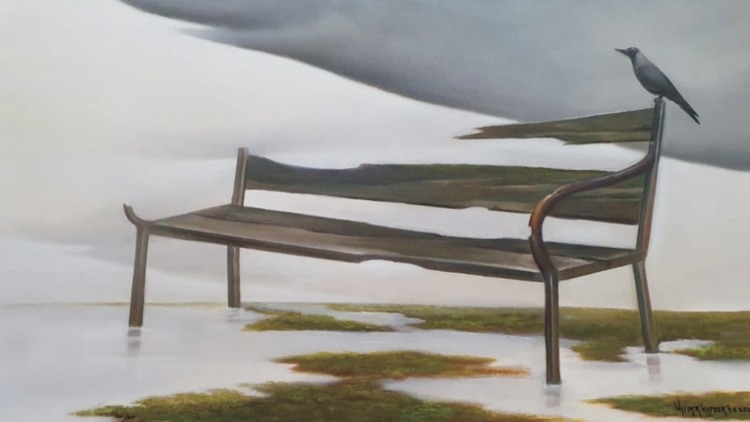 The images of solitude: Lockdown 2 by Wasim Kaopoor

Kapoor’s work is an oscillation between the real and surreal world and he believes that the greater the emotional power the stronger is the relationship between the image and reality.

Kapoor said, “Life has changed tremendously after the world has been stricken by the pandemic. Now, when I look out of the window, scenes have changed, there are fewer humans, less activity and everything is claustrophobic. My conscience and sense of concern are depicted in my earlier painting called -Lockdown which I made last year. We should stay back at home and take accountability for ourselves.”

The painting Lockdown is now a collection of Bharat J Mehra, businessman and social worker in Mumbai and Chairman of Radha Meera Trust.

On artists resorting to virtual exhibitions in the pandemic, Wasim Kapoor says, ‘The pandemic has deeply shaken almost every industry which has been working in a different way now. But I believe that virtual exhibitions can never be a substitute for the warmth of human proximity. Although there will be initial difficulties and impediments, I wish that the art world should thrive again in the future as it did before.”

Kapoor has inherited his creative streak from his father who was a legendary Urdu poet Salik Lucknawi. “I have been a student of masters like Atul Bose, Debiprasad Roychowdhury, Gopal Ghosh, Chittaranjan Das,” he says.

Born in Lucknow Wasim Kapoor lives in Kolkata. He is a  First Class Diploma Holder in Fine Arts from Indian College of Arts and Draftsmanship in Kolkata.

His paintings portray human agonies and pains. A portrait of brooding Mother Teresa seems to amplify her aura; her wrinkles filled with tales of time. His ‘Burqa’ and ‘Victims’ series highlights social issues prevalent in our society. 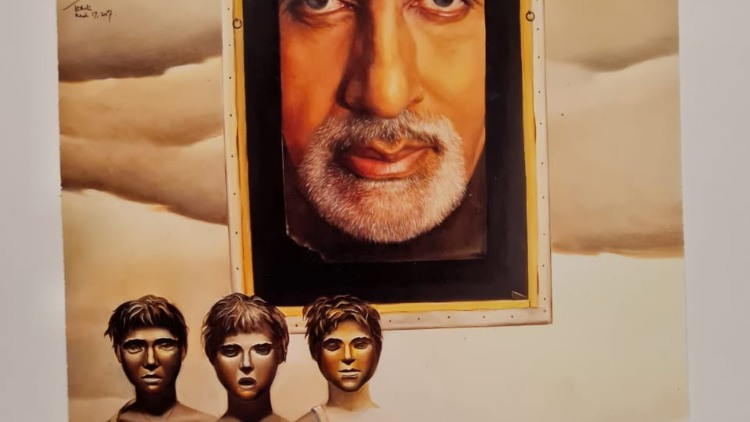 Kapoor says figures came calling to him from childhood when he was confined to a hospital bed for 12 years because of a fall at the age of six months. He was left with a  part of the sky to peep from a window from the hospital room. This is the reason why the blue sky is often the backdrop of his paintings.

His father Salik Lucknawi arranged for him to learn painting while on the hospital bed. Initially his tutor Amar Nandan was not sure if his student wrapped in plaster would be able to learn painting. He was rather surprised to see Wasim’s good pick up. At the age of 14, he started oil painting.

Later when he joined the Indian Art College he was still moving around in crutches.

His series ‘Shades of Time’ celebrates 75 years of Indian cinema encompassing the era of Kanan Devi, Madhubala to Konkona Sen Sharma was a tribute to Indian screen beauties. ‘Great Expectations’ frames Amitabh in the sky accompanied by some street children. He portrayed reality as it is in the Boy Series, Girl Child series and Prostitute series and stood for those whose voice needs to be heard.

For more than 30 years Wasim Kapoor has been exhibiting his works in solo and group shows, some of his works have got international recognition. For Kapoor, awards are nothing but the recognition that comes to his opuses naturally.  He is an artist who celebrates life in surrealism! Rabindra Bharti Award, Bharat Nirman Award, Gurukul Award, Sarba Bharti Kalamoni Award, Quami Ekta Award, Paschim Bango Rajya Pratinidhi Sammilani, Bango Seba Samman are some of the awards to name.