Pashmina which is woven in Kashmir is among seven handicrafts permitted to use geographical tags (GI-tagged), has received further impetus in sales worldwide after the Srinagar city was included as the UNESCO’s Creative City for legacy and heritage in myriad arts.

More than 6,500 Pashmina shawls were GI tagged in the year 2021-22 against nearly 4500 since it was permitted for use in 2013-14, according to the officials at the Department of Handicrafts and Handloom of the J&K Government.

The officials are in working on a plan to further push the use of the GI tag for the promotion of unique handicrafts products with high commercial potential in the global markets.

GI tagging has given a reputation to the shawls, the fakes, and cheaper versions that are otherwise sold in markets across India. Besides ensuring quality, the GI tagging and usage of QR Codes have ensured people pay well for a genuine product and it’s helping weavers and shawl makers earn more.

“The Pashmina artisans mostly live in an area beyond Kathi Darwaza (Gateway) and the foothills of Hari Parbat fort beyond Srinagar downtown. The area is largely inhabited by the artisans who have been traditionally into crafts related to Pashmina like aari embroidery, pashmina spinning, weaving, rafugari (darning), etc. 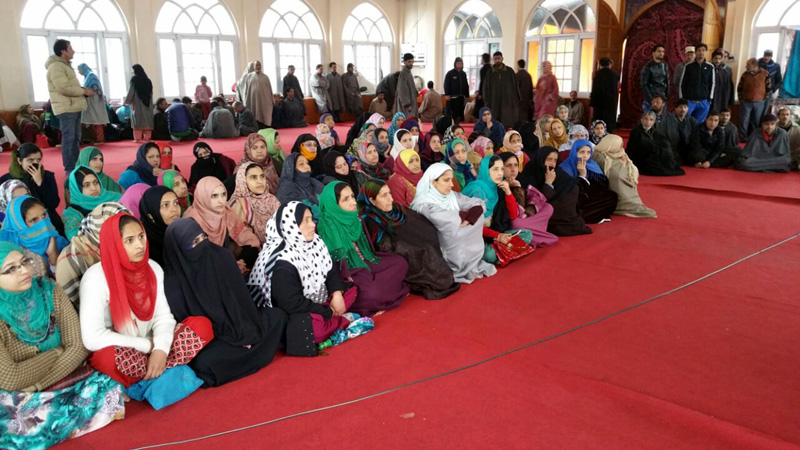 This area is an important part of the Craft safari tours in Srinagar as it’s here the tourists can interact with the men and women who make Pashmina one of the warmest and the most exotic fabric in the world.

Interestingly, the basic painstaking work of cleaning the raw Pashmina wool and spinning it into thread is done by women. This work has always been allotted to women who can make extra income through it. They use a small spinning wheel to create hand-spun Pashmina on the spinning wheel called Yender (in Kashmiri). Usually, every household will have one or more Yender here.


For some reason, women had mostly withdrawn themselves from this activity for a couple of years. The officials say this had affected both the quality and quantity of Pashmina.

However, women like Khadija and Fahmida are working hard to take the legacy forward and keep this creative practice alive. Khadija, 70, and Fahmida, 55 learned the craft when they were teenagers. They maintain a fine balance between work and household chores and spend five to six hours on average spinning sleek pashmina threads. Pashmina spinning helps them create a space where they do what they love and are good at.

Skilled women train other women to learn the craft to ensure the craft’s sustainability. 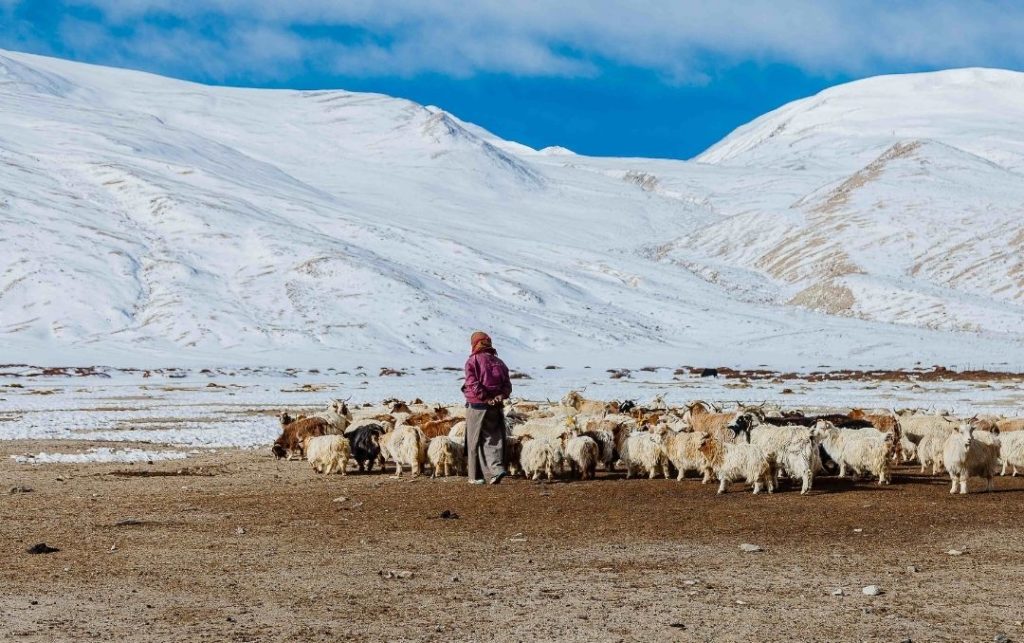 A tribesman in Changthang, Ladakh, with his herd of Pashmina goats

The process of weaving a piece of Pashmina is arduous and requires fine attention to detail at every step. The weaver or wovur in Kashmiri tirelessly uses his hands and feet to weave each thread with the finest intricacy on the handloom the weft is made from the yarn twirled into small bobbins.

Ghulam Nabi started learning the art of pashmina and silk weaving at the age of 6 and has dedicated a lifetime to this fine craft. He has passed on his legacy to his sons who are masters at Pashmina spinning, warping, framing, kani weaving, and myriad other crafts. Taking his venture online, he provides certified pashmina on websites such as India Mart.

Preserving a piece of Pashmina is an art and mending the worn out fabric requires a skilled artisan. Pashmina stands the test of time when kept with care and love but worn out Pashminas could be brought back to life by the rare and skilled craftspeople called rafugars.

Mushtaq Ahmed Jan, a highly-skilled rafugar uses a darning stitch to mend a torn or worn-out Pashmina. The process of darn-stitching is tedious and requires attention to detail. It is like healing a wound. The weaving should be invisible and obscure on the surface as if never mended. A 4th generation artisan, Mushtaq Ahmed is taking his family’s legacy of mending Pashmina to perfection.


Pashmina wool is obtained from Changthang goats, found in Ladakh and Tibet. These goats shed their winter coat every spring accounting for approximately over 100 gms of fiber each goat. The goats naturally shed the undercoat wool, which is collected by combing and not by shearing.

Raw Pashmina is exported to Kashmir where the men and women artisans, mainly in downtown Srinagar clean it and spin it for weavers to make a fine quality scarf, wrap, or stole.