Heritage Osmania Hospital on verge of ending as rubble This quaint more than century-old iconic structure in Hyderabad lets you time travel to the Hyderabad of the past-The Osmania General Hospital the grandest edifice at Afzalganj and a forlorn reminder of a critical chapter of Hyderabad’s medical history. While it has never been more relevant, and urgent, to preserve the past for the future The Year 2022 has magnified the need to not just revere that which is time-honoured, but also commit to its longevity.

This building with its once archetypal and stately façade, is one of the most important medical and historical landmarks in Hyderabad, Built by Mir Osman Ali Khan, the seventh and the last Nizam of Hyderabad State, is now plagued with the worst crisis as it may be consigned to rubble if the administrations so desire. And if so, it will be an end to a legacy.

In the early hours of July 27, incessant rains led to the flooding of the Musi river “following which the main door of the hospital was locked and the patient moved to temporary built sheds in an adjacent building on the campus as there was a deluge on the ground floor. Photos and videos of patients perched on beds and hospital staff wading in ankle-deep water went viral online. This was due to the blockage of outside manholes by plastic bags claims Dr. Mohammad Iqbal Javeed. 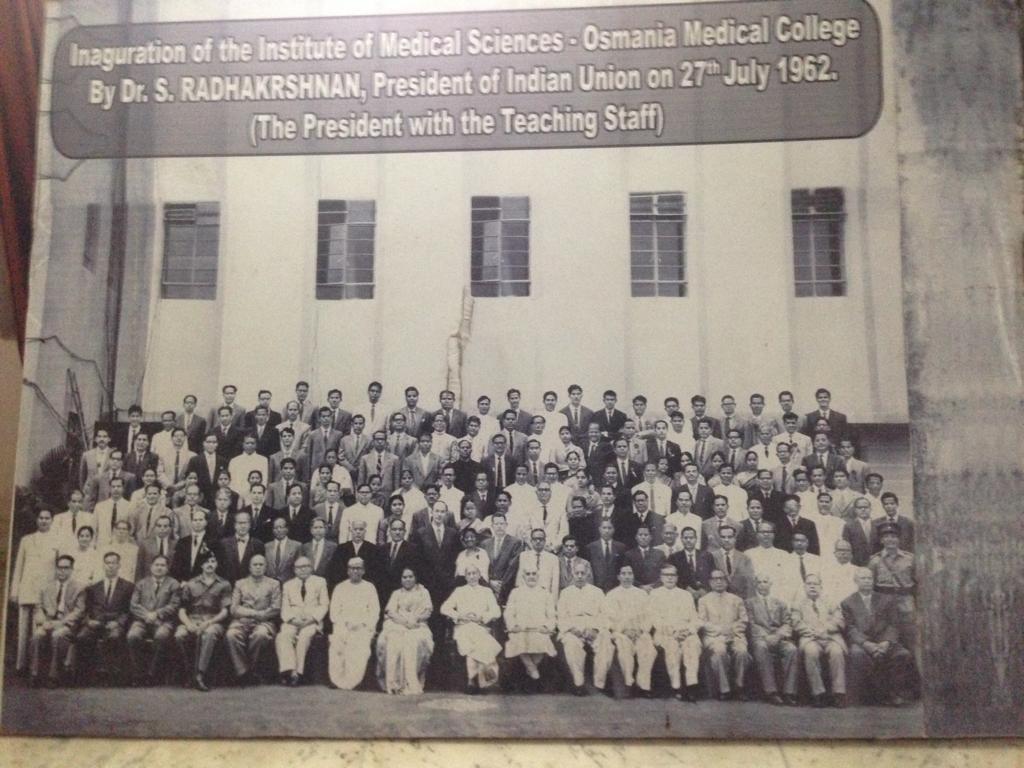 Vintage picture: President at the inauguration of the Osmania Medical College

Facing a backlash on the incident the Government announced that the iconic structure would be demolished and new towers raised. Since then Heritage lovers, doctors, students, and common people in love with the heritage façade that lines Hyderabad were up in arms. But truly this iconic structure could very well do with the repairs. Many said that this icon does not need intensive care but just plastering.

The Medical School was shifted to Sultan Bazaar at the Residency Hospital belonging to the British.

On September 28, 1908, the Musi River had flooded labeled the most destructive flood in Hyderabad’s history. The floods wiped out large parts of Afzalganj then which was a hub for Grains. Hundreds had died and the toll could have been far higher but for a tamarind tree that stood near a small local hospital on what would later become the Osmania General Hospital campus. Even today people gather under the tamarind tree to remember the many lives saved and pay reverence to those who lost their lives.

In 1911 Hyderabad had an epidemic that would lead to the founding of Osmania General Hospital. Osman Ali Khan had just begun his reign as Nizam when the bubonic plague engulfed the city. With scores affected and dying the Nizam set up the City Improvement Board to oversee the General improvement of living conditions and Osmania General Hospital was part of the plan to modernize Hyderabad.

Osmania Hospital is just not a Hospital of its kind in the country with 13 campuses but seeped in landmark history as it is here the trials were taken up on Chloroform. The trials were taken up after the sixth Nizam Mahboob Ali Khan had sponsored the Hyderabad Chloroform Commission on the advice of his physician Dr. Edward Lawrie the Scottish surgeon appointed in Hyderabad in 1885. He was also the resident surgeon of the Hospital. Chloroform was already being used for surgical procedures at that time. But how to use it safely was still not determined. Many patients were dying during operations. It was Dr. Lawrie who played a key role in establishing its safe use as an anesthetic disproving claims by other prominent doctors in the West, who believed that the drug was causing deaths by damaging vital organs, said Dr. Mohammad Iqbal Javeed. 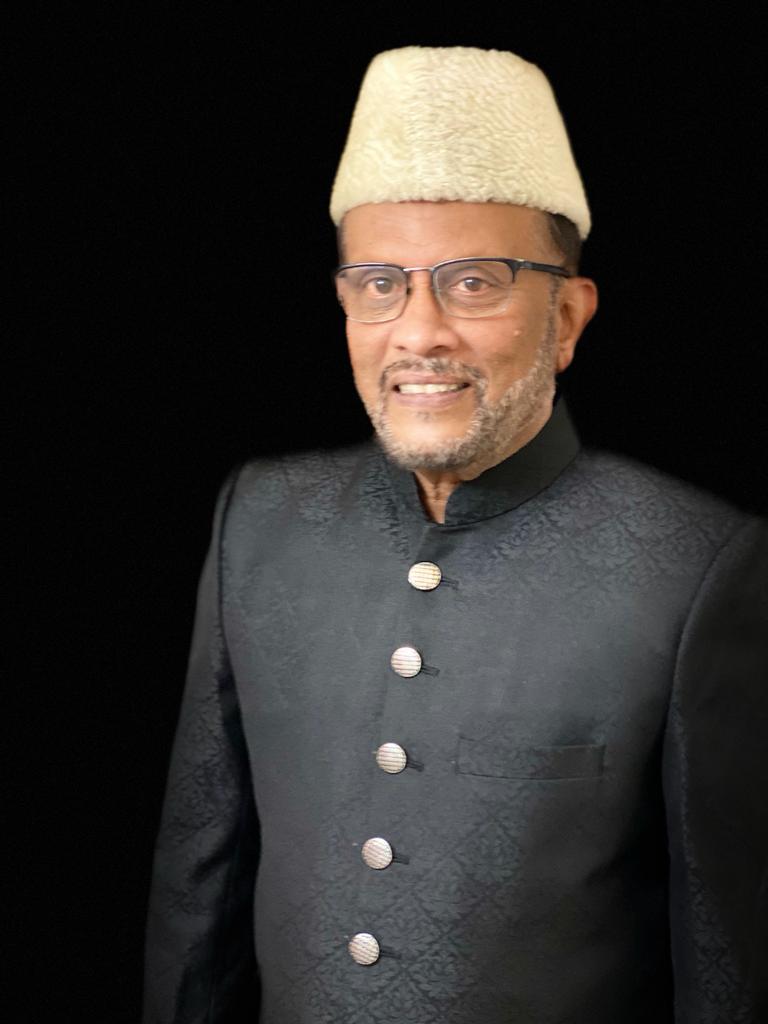 According to Dr. Mohammad Iqbal, Javeed Osmania General Hospital was one of the largest and best-equipped hospitals in the region. People from far and near came to Hyderabad for treatment.

It was designed by British architect Vincent Jerome Esch, the then assistant to architect William Emerson in building the exquisite Victoria Memorial in Calcutta. This Royal building was situated on 26.5 acres of land on the banks of the Musi River.

Nizam’s foresight to provide good quality health to his people led to ensuring that every specialty of health care was available to his people in campus. With that in mind, the Nizam came up with various campuses which were part of Osmania General Hospital. In all, there are 13 campuses.

Institute of Preventive Medicine Naryanguda where vaccines were manufactured and people were inoculated for the prevention of communicable disease.

TB Hospital now known as the Institute of Chest Disease and Tuberculosis situated at Eragadda, Hyderabad treated people for TB and later sent them to Ananthagiri hills at a sanatorium for recovery and rejuvenation.

This imposing main building is a three-story structure constructed using granite laid in lime mortar. The windows have been designed in arches that are decorated with masonry lattice. Apart from the iconic building, there were nurses' quarters so personnel could stay on the premises and attend to their duties day and night. There was a laundry section for the hospital. However, they were later demolished to make way for modern hospital blocks and parking spaces.

According to Anuradha Reddy Convenor INTACH (Indian National Trust for Art and Cultural Heritage) Hyderabad, the heritage building occupies just one acre of the 26.5 acres campus. Since it is a heritage iconic building Government can preserve the main building and build a new hospital around it. There is so much space to build a world-class hospital, according to Anuradha Reddy.


Hyderabad is not only famous for biryani, sherwani, and gandipet ka pani (it is said that those who consume Gandipet water never leaves the City )but is also known for its historic landmarks like the Charminar, Golconda Fort, many opulent palaces of the Nizam beside the Osmania University and Osmania Hospital.

Also Read: Nizam Hyderabad: A family that ruled for 224 years

The past is a narrative from which we can weave a million stories, and buildings do matter Every vertical of aesthetics is important be it buildings, culture, heritage monuments The need to preserve the histories and stories of our communities in this fast-changing world is dire” says Anuradha Reddy from INTACH.