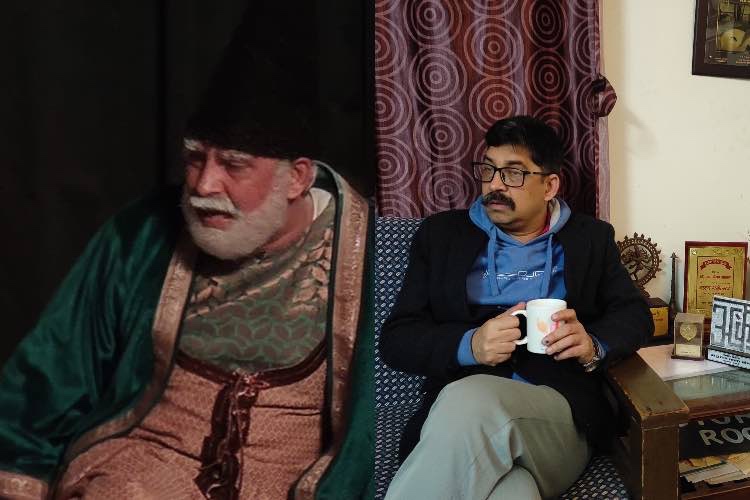 “Phir Ghalat Kya Hai Ki Humsa Koi Paida Na Hua”, this line translates as “What is wrong then, if there isn’t anybody like me”, while many would take this as an offence, Mirza Ghalib would have proudly answered “Mai Andaleeb-e Gulshan-e Na Aafrida Hu” meaning “I am the nightingale of the garden which has not yet been created..”. This not only is a sneak peek into the legendary Urdu poet’s futuristic mindset but also shows his timelessness.

Dr. M Sayeed Alam has played the role of Ghalib on the stage for over 30 years. The recipient of the Ghalib Award for his extensive work on the poet, Alam is a veteran theatre personality. His famous works on Ghalib alone include plays like Ghalib, Ghalib Ke Khat, Lal Quile Ka Aakhiri Mushaira, Ghalib In New Delhi, Ghalib In Kolkatta. Awaz-the Voice spoke to the playwright-actor-director on the occasion of the poet’s 153rd death anniversary. Excerpts from the conversation:

What is Ghalib for you?

A great poet, obviously, a great personality as well, but more importantly, he is one of the most intelligent people I have ever come across. I’d call him a genius; someone who was very original; someone who could have been approved as God; as what he wrote was never written before him nor after him. His authenticity wasn’t in the sense of whatever was in the vogue rather he expressed the rarest. This doesn’t mean that he did not follow his seniors, he was in awe of Mir Taqi Mir (1723-1810), whom he took as his inspiration but the presentation of Ghalib’s poetry is entirely different, that is he introduces you to Mir rather than the other way round. There are many similarities between Mir and Ghalib but in no way does Ghalib's poetry appear as a copy of Mir's. He wasn’t a prolific reader or a scholar; he often read the borrowed books, and produced his work which was a class apart.

How would you describe Ghalib as a person?

I wouldn’t describe him as a thorough gentleman, shareef-neik aadmi (a gentle docile person). He had many vices. He was more or less like any of us; he compromised a lot, he did not side with the Indians, we expected him to be a freedom fighter, which he was not, and almost sided with the British during the war of 1857. He would run from pillar to post for his pension. He would write couplets for the Queen, Governor Generals, he was more of a solicitor, an equivocator, he was an ordinary man with extraordinary intelligence and the combination of two is very rare. 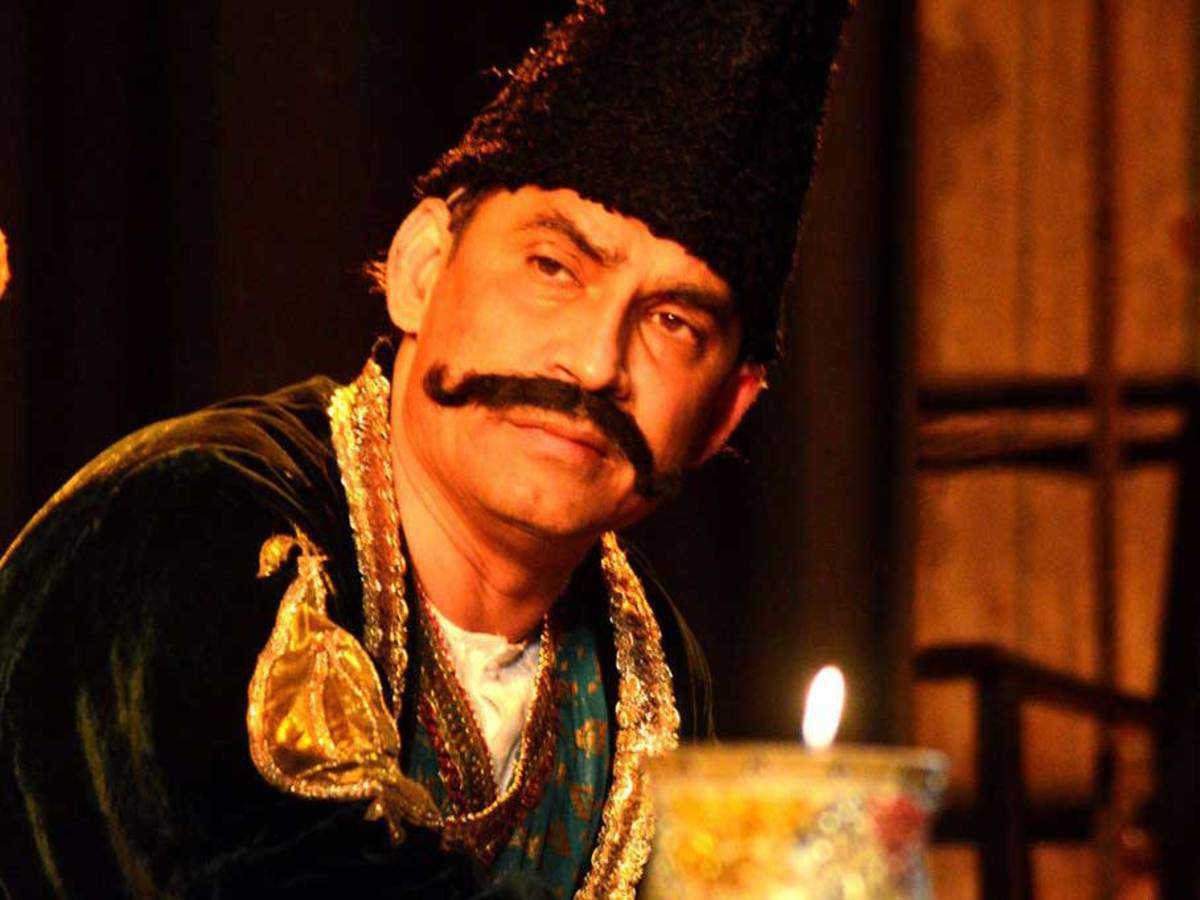 Sayeed Alam as Mirza Ghalib in the play Ghalib

So, apart from his originality, what else inspired you to relive his character on the stage?

Again, a man with different hues, a combination of grays, blues, white, black..many hues. A person who was good and bad at the same time. A person who lived in a very important era. So while working on him or talking about him, we can re-visit a very important era of Indian history. Also, he's the one who lived on the threshold of history and modernity. Through him, we witness the Delhi of the 19th century, particularly the second half of the 19th century, when the past was merging with the present to create a future. There are various episodes in his life which can be looked upon. If you remove the poetry aspect from his life, even then his life is very interesting infact tragic. His father died when he was hardly five years old, he was brought up by his uncle. His uncle died when he was nine years old, he was brought up by his maternal grandfather. He came to Delhi and yet he did not belong to Delhi. Originally, he was from Agra, but Delhi became the part and parcel of his life.

We can see Delhi in him, and we can see Delhi through him, so it's really interesting that an outsider represented Delhi so well. I mean, Delhi is best represented or a very crucial period of time in history is  best seen through an outsider who was rallied. And when you think of Agra, you never think of Ghalib although he was born and brought up there, so. However, if Agra is represented best by Taj, then Delhi is represented best by Ghalib. The interesting facts and facets of his life, his times and his works make him an important subject to talk about.

Is his poetry more relevant today? Was he in some way ahead of his time?

First of all, I don't believe in this theory that one’s greatness lies in he or she  being ‘eternally relevant’. I mean, one can twist and turn fact and figures to make someone relevant to modern times as well. If his poetry is relevant to the 21st century, then the negative side of it is that he might not have been relevant in his era. I think one should be relevant in the era one lives in rather than in the eras to come. Another negative side of this is that if Ghalib is relevant today then there’s nothing like modernity, it never happened.

But then again how can one understand Ghalib in the current times when his 2/3rd of the works are never read or understood.

His major works are in Persian, so saying it is relevant today would be hyperbole, it is tough for me even to understand his Persian works. His greatness is that his works are so lyrical and enchanting that one remembers them easily, so even if you don’t understand the meaning you love to read Ghalib's poetry out loud. And as he used to say that a good poem is never meant to be understood rather it is to be felt. For example “koi mere dil se puchhe tere tir-e-nim-kash ko; yeh khalish kahan se hoti jo jigar ke paar hota”, this couplet is layered, it has various meanings but then again it can be remembered easily due to “ahang” (the rhythm) thus it is often recited, this is Ghalib’s greatness. 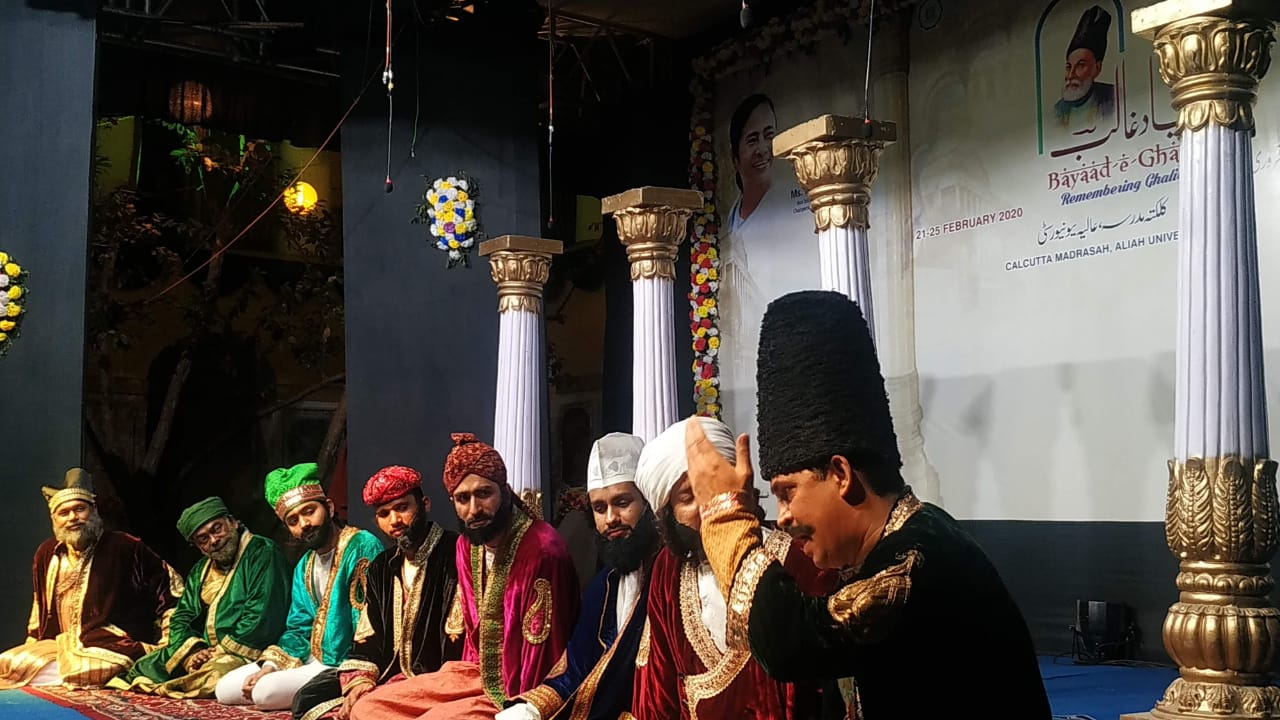 Did Ghalib welcome modernity introduced by the British masters?

How would you introduce Ghalib to the youth of today?

He was someone who always wittingly chose the difficult path, the road less traveled, there were lots of opportunities before him to express his views and his thoughts tradionally. And he could have done so the way his contemporaries were doing but he didn’t rather he went against the flow.

He relationship with and his love for his younger brother, who was mentally deranged needs to be explored a bit more. He (Ghalib) was childless; his newborns could not survive beyond 6 months. This affected him and, indirectly, as was his style, reflected in his poetry. He hardly visited Agra after leaving it, though his mother lived a good age. He mentions the death of his adopted son (his wife’s nephew, later on, Ghalib adopted the deceased kids too) in his famous letters. His pain can be understood from this couplet

(I wish you'd have waited for me to tag along, now that you went alone, stay alone for a while, you say that we'll meet on the day of judgment, is there a better day to be called so, you are a fool when you ask me as to why I live, as against my wishes, my destiny has something else stored for me)


Would you call Ghalib stoic?

Well, to an extent yes, he never expressed his emotions on a platter. He would express his despair. But not to generate sympathy for help or assistance.

What about his wife?

Not much has been written or said about their relationship, but those days people hardly discussed their private affairs. She was a woman of the elite class, belonged to the family of Nawab of Loharu; she was well-read, well versed wordly wise woman. Ghalib was very much attached to his in-laws, but beyond that let’s not discuss what the poet himself kept to his heart. It is really interesting to note that marrying more than once during those times was a very common thing, but he never did so, not even to have a child as was the common practice those days…

He was known for writing letters, tell us something about that.

A very interesting prospect actually, he wrote prose, he wrote poetry also. His poetry is complex, but the prose is very lucid and easy flowing that too during the times when his contemporaries were penning down complex prose. Though letter writing was not the part of literature those days, he was regularly writing letters, and they were the part and parcel of life those days just like modern-day phones. He is no doubt the father of modern Urdu and Hindi. He even used some English words in his prose. Words like ‘post paid’ ‘stamp’ were regularly used by him. He unintentionally, in fact, unwillingly invented modern Urdu prose. 'Ghalib ne kaha tha’ often trends on social media, but it isn’t what the original prose or poetry is about, what would you say about that?

Take it positively or at least light heartedly, though that is horrible shayri , Ghalib was peculiar about his vocabulary, punctuations, rhythms, he once wrote in his letter that “Lachaar” is not a word, the correct word should be “nachaar” as according to him mixing Persian with Arabic was blasphemy. The use of his name to express a semi-poetic thought proves that he is the one who is in everyone's subconsciousness, whether you know Urdu or not. Anything that a commoner finds seemingly literary, is ascribed to Ghalib and in some cases to Iqbal. This goes to prove that the two, in same order, are the best.

If you were to ever meet Ghalib in person what would you tell him?

I’ll tell you the answer in Urdu, and you please copy the verbatim as it is, if I were to meet him ever I would say “Ghalib Sahab, aap to Qarz khwar mar gaye, par aapne haazaroan logon ki rozi roti ka intezam kar diya", as you asked me earlier this is his relevance in modern times. He died a pauper but turned out to be the source of income for thousands of people. When a film is made, even a spot dada gets his due salary. Gulzar is a great poet but his magnum opus is indeed the serial Ghalib. Somebody is great when his greatness is used by others to make themselves counted. I am fortunately one of those..ever indebted to Ghalib the debtor. Ohh!, he would have loved Facebook, WhatsApp, Instagram, these platforms are yesteryears letter writing and postcard sharing. He would have remained glued to his screen for a minimum of 10 hours and kept on replying to his students and sharing anecdotes and their poetry. He would have loved to be a part of Facebook. He loved talking, he loved being surrounded by people of various hues. Ghalib despised the past, he adored modernity with all his soul. He used to say it isn’t necessary to copy the past, he once wrote to his student “Purane zamane me gadhe bhi the, ab kya unhe bhi copy kroge?”(there have been fools in the past, do you want to copy them too?), he admired the past, took inspiration but he had a vision larger and greater than his own time and maybe for the times to come.