Is Zardozi losing its sheen, leaving artisans in hardship? Zardozi (gold embroidery) workers in Varanasi, Uttar Pradesh, are on the brink of starvation and need urgent attention. The condition of these workers is no better in the state capital, Lucknow, 400 kilometers away where at least one-third of them have taken to driving battery rickshaws after the pandemic.

It has been almost ten years since Lucknow Zardozi got the Geographical Indication (GI) tag that gave the craft official recognition but the plight of workers remains unchanged.

Ironically, it was in Lucknow that Zardozi flourished under the patronage of the Nawabs of Awadh. The craft has been traditionally prevalent in Lucknow and the six surrounding districts of Amethi, Barabanki, Hardoi, Rae Bareli, Sitapur, and Unnao. In the 18th and 19th centuries, Zardozi became popular with the wealthy Hindu, Muslim, and European social elite in Bhopal, Calcutta (now Kolkatta), Delhi, Hyderabad, Kashmir, and Varanasi. 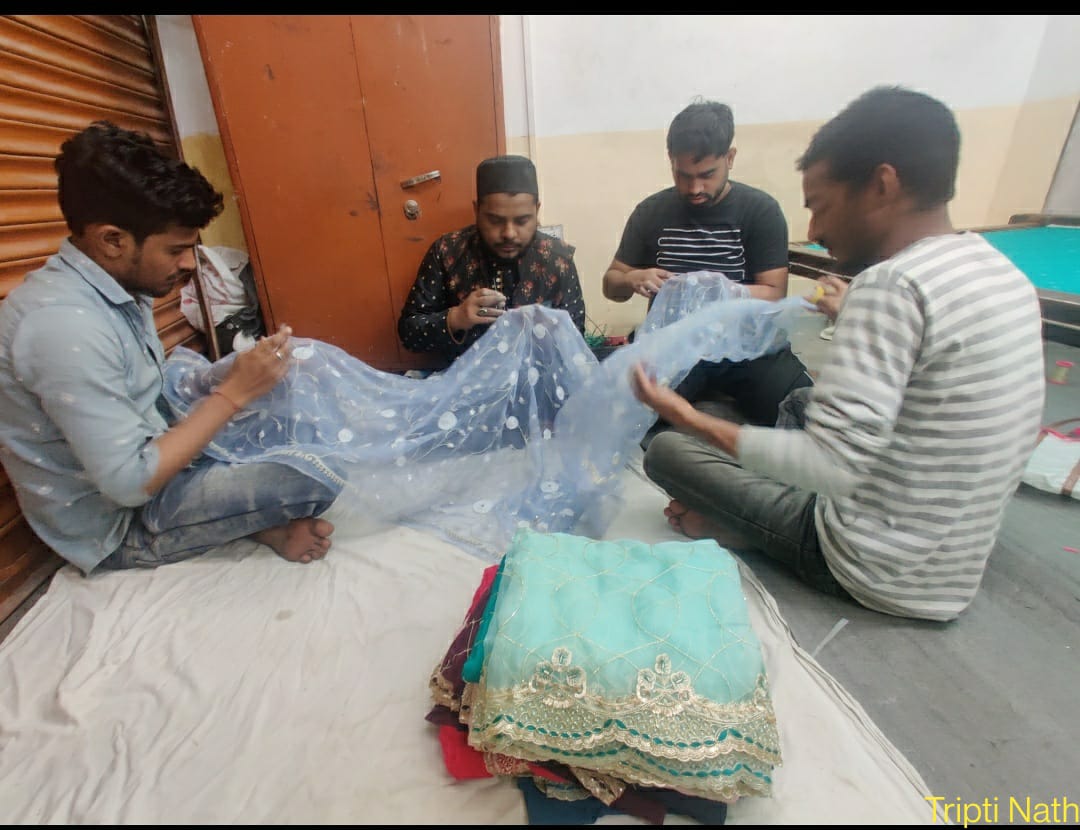 Depending on the choice of the customer, expensive embellishments like pearls, quills, and precious and semi-precious stones are also used. The crochet-like needle used to cast this embroidery is attached to a wooden stick with a hook at the end. This embroidery is also known as aari work.

The Ministry of Textiles has estimated that Lucknow has more than 10,000 micro and small enterprises engaged in making zardozi products. This embroidery is used on bridal lehengas, wedding sarees, Pakistani and Punjabi suits, party wear gowns, Kurtis, cushion covers, wall decorations, bags, purses, and even shoes.

Harun Ansari, a 42-year-old Zardozi worker in Ramnagar, Varanasi, says that at least one-third of Zardozi workers have left the city to Ahmadabad, Mumbai, Delhi, and Surat in search of work. 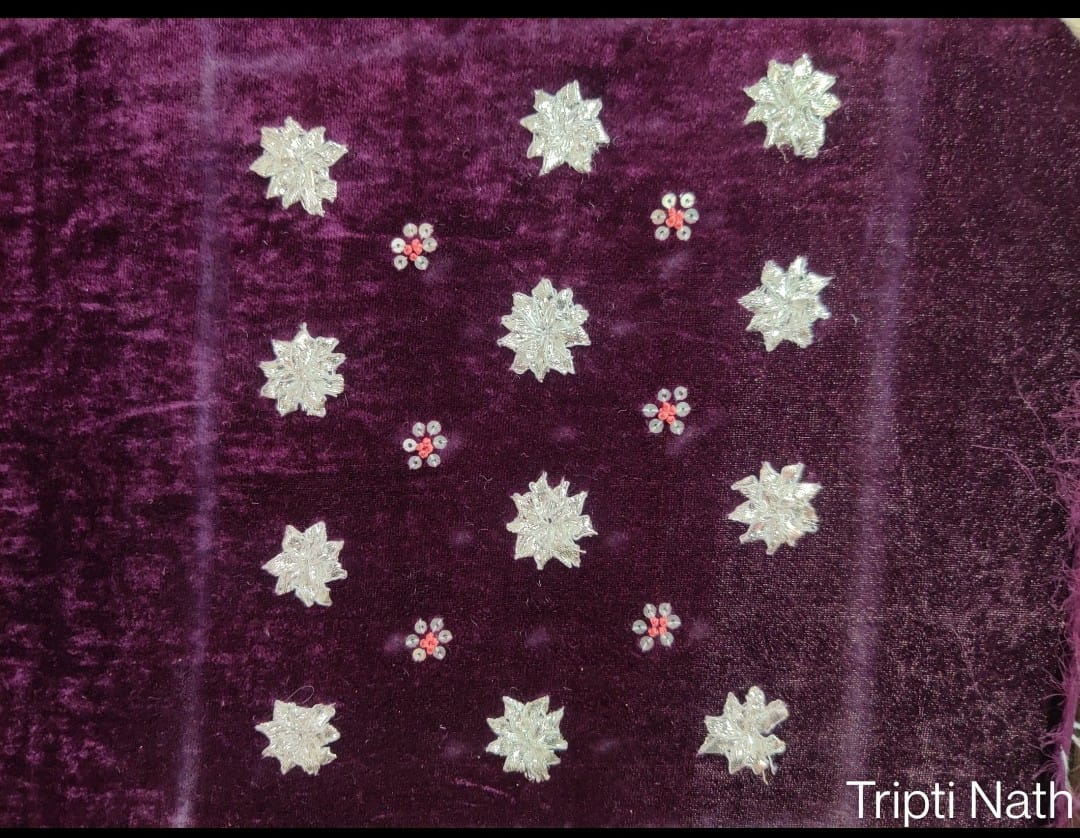 The exquisite Zardozi on a fabric

“For three to four months, there has been hardly any demand for this amazing craft here. We are managing somehow with the meager earnings that my father gets selling groceries on a cart. My circumstances don’t allow me to look for work outside Varanasi. I wish communal harmony prevails so that people feel confident to step out and order work, ‘’ says Ansari who, in better times, had employed a middle-aged Hindu Zardozi worker in his workshop.

Harun who has studied till Class XII says that there is hardly any demand for Zardozi now. “I have been doing this work for 25 years, but today we are facing a livelihood crisis. We are dependent on orders from the market. For a day’s worker, we pay Rs 200 to Zardozi workers.’’

In the narrow and crowded lanes of Gol Darwaza in the Darul Shafa area of Lucknow, Zardozi workers have similar tales to tell. The narrow alleys leading to the workplace are not exactly easy to negotiate. Most of them work on fabrics that are embroidered and then supplied to local showrooms.

Here, five workers sit in a dilapidated building opposite Shahi Shafa Khana. All they get in between work is tea in plastic cups and the view from the window is not refreshing either.

One has only to experience a day in the life of a Zardozi worker to see how they toil. They sit on mats for 15 to 17 hours at a stretch with their heads bent doing fine needlework on a common fabric held taut on a charpoy. Zardozi is done on this wooden frame called the ‘Kachobri’. Two wooden beams -the Fared are used to roll the cloth, if necessary. The design to be embroidered is traced on the fabric through pinpricks and the patterns are stored for decades.

The wages for this painstaking and complex work are less than two dollars a day. Also, this work puts them at risk of postural defects and spinal ailments. Chanda and Naseem (bespectacled) busy with their Zardozi work

Many Zardozi workers say that they were sent to learn the craft at the tender age of 10. This art has survived through generations of skill transfer. Today, most artisans do not want their children to pursue the same.

In another Zari embroidery unit in the same area, Jane Alam sits with a group of workers tracing a pattern. Alam who has worked in this trade for almost 40 years, says he learnt the craft from an area near Bhindi Bazaar in Mumbai. A Class VIII dropout, Alam says that while the talented workers remain penniless, the middlemen make the profit.

His colleague, Mohd Hassan who has been working in the unit for 20 years says that all he gets is Rs 150 a day for working eight hours.

Mohd Miraj, a 30-year-old Zardozi worker travels 80 km from his village Saholi in Sitapur district to Hussainabad to pick up work from Sadiq Hussain, owner of a workshop. A Class X dropout, Miraj learned the trade from his maternal uncle, Mohd. Latif.

He says, “The volume of work has declined. So, I am also thinking of going out of Lucknow to work. We are managing somehow with our income from farming in our village. The daily wages range from Rs 400 to Rs 500 provided we get work. Our income is therefore erratic.”