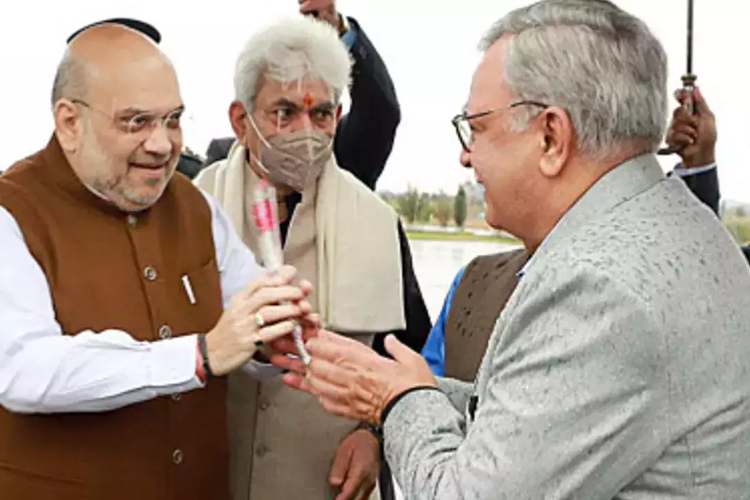 Shah visited Shri Mata Vaishno Devi shrine in Jammu, Chattipadshai Gurdwara in Srinagar, halted his speech and removed his bulletproof jacket as soon as he heard the Azan (call for namaz) in North Kashmir's Baramulla district.

The union Home minister assured Gujjars, Bakarwals and Paharis in Rajouri that the era of discrimination has ended and they would get their due share in jobs and other sectors soon.

During his visit he also visited the grave of a martyred policeman, Mudasir Sheikh, and paid floral tributes to him.

He met his family members and assured them that they would be provided all the possible support and assistance and that the entire nation stood with them.

Mudasir had laid down his life while fighting three Pakistani terrorists in a counter-insurgency operation in Baramulla in May this year.

Shah wound up his visit by reiterating that no talks will be held with Pakistan and directed the security forces to wipe out terrorism completely from the Himalayan region.

He announced that assembly elections in the Union Territory would be held as soon as the electoral rolls are finalized.

Shah maintained that the Centre would only talk to the people of Kashmir and no one else. He urged the misguided local youth to lay down arms and join the national mainstream and choose life over death.

The Home Minister launched and laid the foundation stones of projects worth Rs 2000 crore in Kashmir and Rs 1900 crore in the Jammu region.