Union Home Minister Amit Shah set an unforgettable example in religious unity by pausing his speech for Azaan, the Muslim call for prayers in this north Kashmir town on Wednesday. This is Amit Shah’s first public rally in the Valley after the abrogation of Article 370.

Shah made an instant connect with the audience and won applause as he halted his speech on hearing the Azaan from a nearby mosque here. Before resuming his speech, he sought approval from the public. The audience cheered him for his gesture with a show of hands.

The Home Minister removed the bullet-proof podium and protection as he addressed the rally amid high-security arrangements. Thousands of people from Kupwara, Bandipora, Handwara, Tengdhar, Trehgam and Uri thronged the rally at Showkat Ali stadium.

He said that elections will be held in Jammu and Kashmir with full transparancy as soon as the work of compiling the voters' list is over. 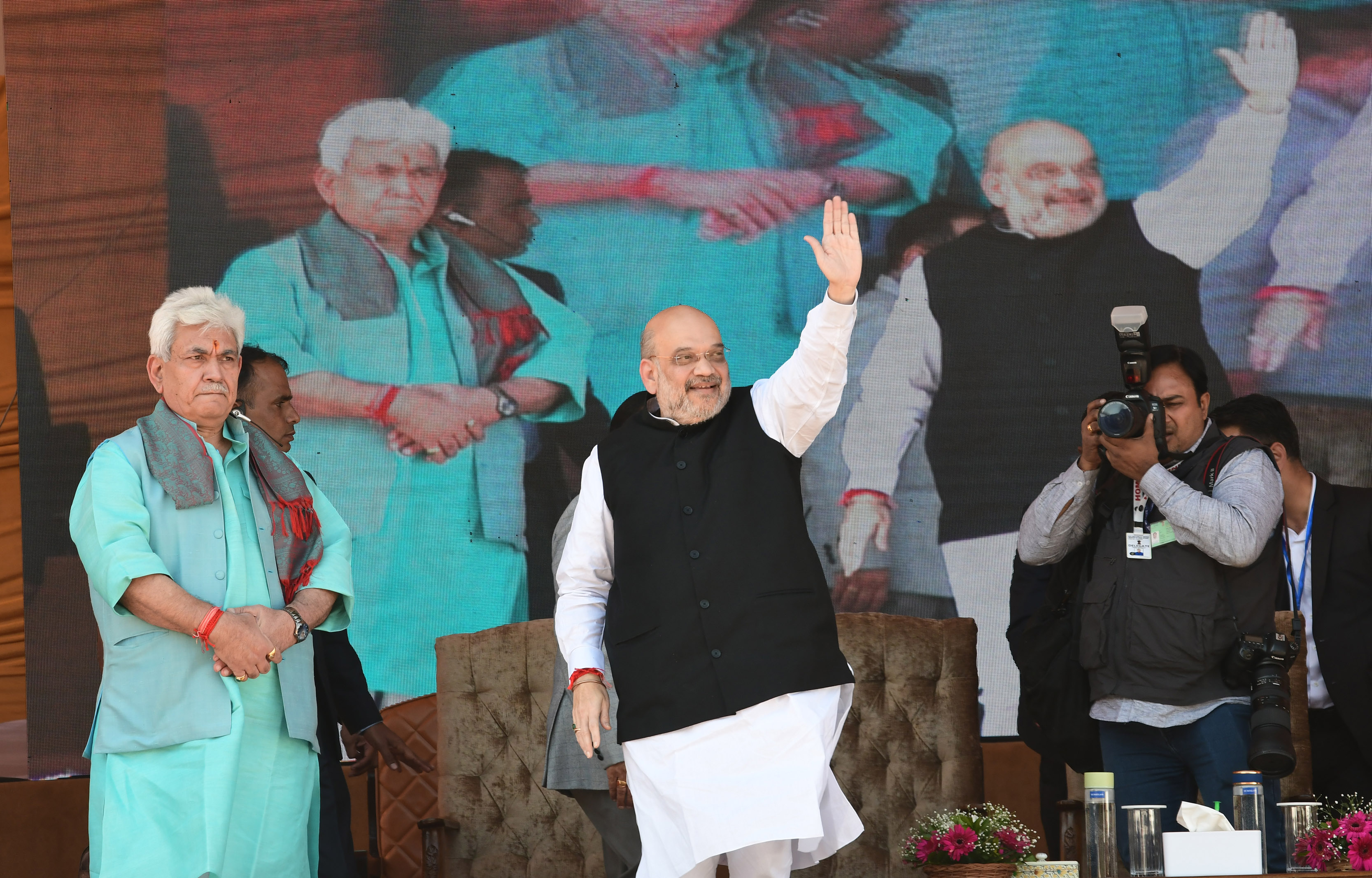 He said that Modi’s model of governance brings development and employment. He said that for the last 70 years, Mufti and company, Abdullah and sons were in power in the state but did not provide housing for one lakh homeless people. They also resisted the entry of Anti Corruption Bureau in J&K. “Modi ji gave homes to these one lakh people between 2014-2022.’’

Lambasting the National Conference chief Farooq Abdullah and Peoples Democratic Party president Mehbooba Mufti on their demands that the Centre should talk to Pakistan, Union Home Minister Amit Shah on Wednesday said that he would prefer to talk to the youth of Jammu and Kashmir rather than talking to the neighbouring country.

He accused the 'Gupkar alliance' of "laying a red carpet" for Pakistani terrorists into the country. Shah said, "Some people talk about Pakistan here. I want to tell them today, bring the statistics about the number of villages in PoK that have electricity. All villages in J&K are fully electrified.''

He said that Modi has brought industry to Jammu and Kashmir and empowered the youth with mobiles and laptops in stark contrast with other political parties who handed them stones and guns. 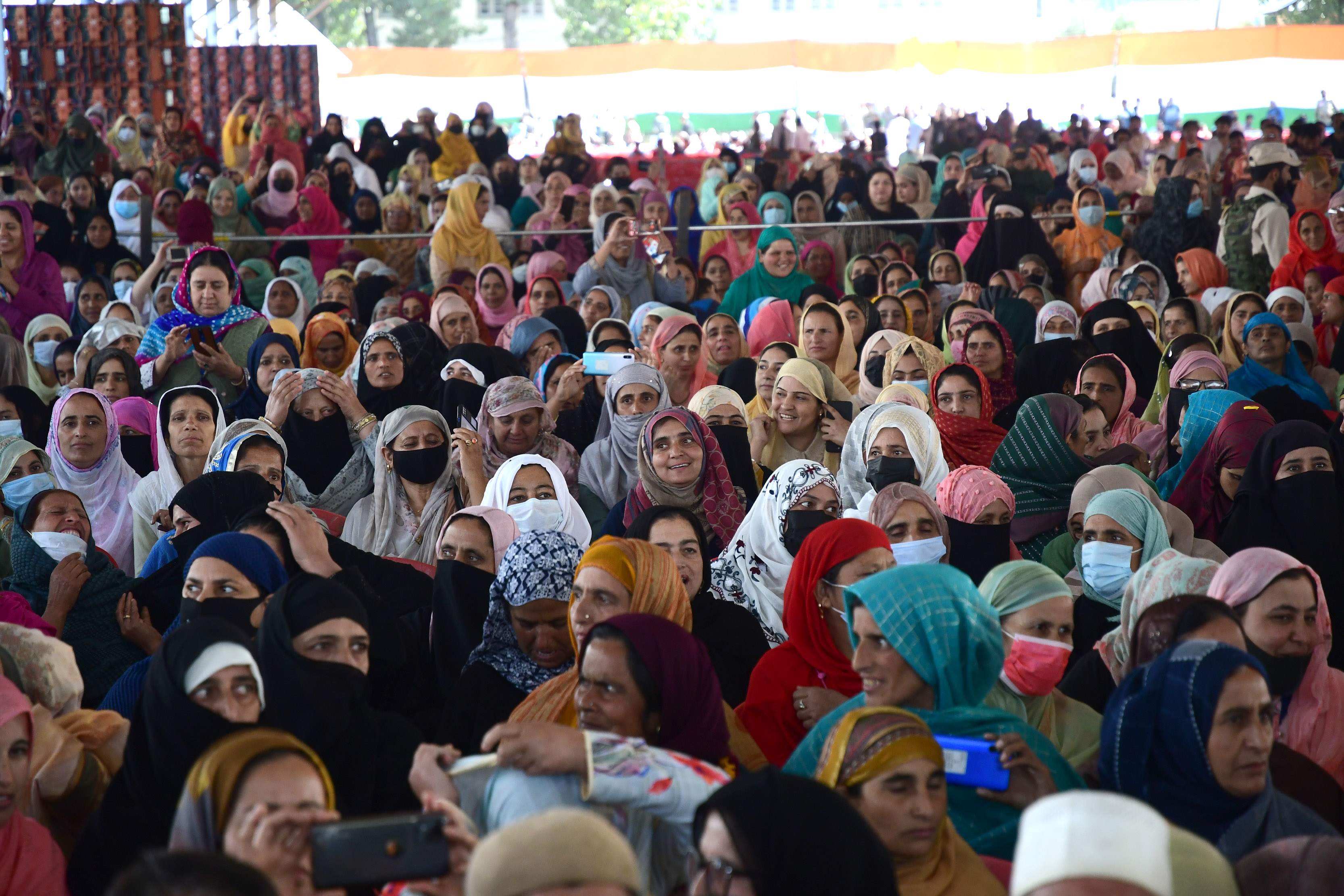 Addressing the Gujjar, Bakarwal and Pahadi brothers, Shah said, “I am here for the past three days. PM Modi and L.G. Manoj Sinha's work is spreading happiness.’’

The Home Minister arrived in Srinagar on Tuesday evening for a three-day tour of the Union Territory. Before addressing the rally on Wednesday, he also chaired a meeting to review the security situation of J&K in Srinagar. He tweeted that people of J&K are witnessing a new era of peace, progress and prosperity under the leadership of PM. “I applaud the relentless & coordinated efforts of our security forces to curb terrorism.’’

Addressing a rally in Rajouri on Tuesday, Shah said that Kashmir has silenced all critics today. He also assured reservations to the Pahari community of the U.T. He also chaired the core group meeting of the BJP on Tuesday where he asked party leaders to gear up for the Assembly elections which would be held soon.

Security has been beefed up in the valley for Amit Shah's visit. The officials said multi-tier security has been put in place and drones are being used for aerial surveillance.

ALSO READ: How 60-year Buddhist-Shia conflict was resolved in Ladakh

After returning to Srinagar from Baramulla, the Union Minister will inaugurate and lay foundation stone of various developmental works of Kashmir Division