We pledge to dismantle political violence in Bengal: Nadda 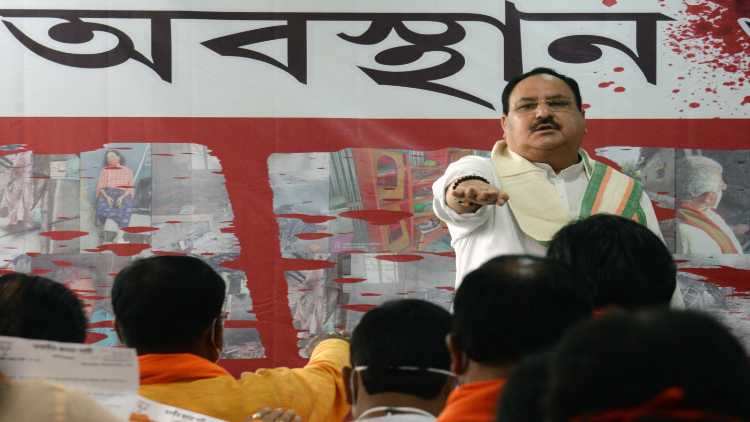 Hours after Mamata Banerjee took oath as Chief Minister of West Bengal, BJP national president JP Nadda on Wednesday said we also take an oath that we will dismantle political violence in the state.

Addressing the party workers in Kolkata, Nadda said: "Those who were supposed to protect others, are the ones responsible for this violence. They can take oath, everyone has the right to do that in a democracy. But we also take an oath that we will dismantle political violence in Bengal."

Nadda is on a two-day visit to West Bengal starting from Tuesday to hold a protest against the alleged atrocities on party workers in the state by the ruling Trinamool Congress (TMC) government.

Earlier in the day, Mamata was administered the oath of office by West Bengal Governor Jagdeep Dhankhar.

Several shops and residences were allegedly vandalised by TMC workers in the Gopal Nagar area of South 24 Parganas. "On May 2, TMC goons attacked my home as my husband was BJP's polling agent. They even threatened us to sell our property and leave this place," a resident, Shefali Das told ANI.

On Monday, the BJP office and some shops in Ghoshpara road of Bhatpara were allegedly vandalised by miscreants and at least 13 crude bombs were hurled in the area. The shopkeepers alleged that TMC was behind the attack as the area is known to be of BJP supporters.

However, local TMC leader denied the allegations and said BJP's insiders were behind the incident.

Mamata Banerjee-led Trinamool Congress won 213 seats in the just concluded West Bengal assembly elections. The Bharatiya Janata Party garnered 77 seats in the 294-seat state assembly. However, elections for two seats in Murshidabad are postponed because of the demise of candidates due to COVID.