Weavers of Benaras are one large family Ramzaan Ali, a 29-year-old weaver who lives in Bakrabad locality of Benaras, could not go to his weaver friend Sanjay Verma’s house on Holi on Friday as they too had Shab-e-Barat the same day. “It is a day of Ibadat (worship) for us,” he explains.

When Awaz-the Voice contacted Ramzaan over a video call a day after Holi-Shab-e-Barat, for a story on the trade of Benarasi sari, he was at the ancestral house of his friend Sanjay at NatiImli in ‘Bunkar colony’. Both of them were celebrating holi, applying fluorescent pink colour on each other’s forehead.

Ramzaan said he had just had finished having two ghujiyas (sweet deep-fried dumplings made with semolina or refined flour and stuffed with a mixture of sweetened ‘khoa’ and dry fruits).

Natilmli has a mixed population of Hindus and Muslims.

Although Sanjay, 46, has studied up to the 10th standard, he enjoys his young friend’s company. They are second-generation friends and have fond memories of playing cricket together. It was not surprising therefore that Ramzan chose to spend the entire day in Sanjay’s house to make up for his absence on Holi. 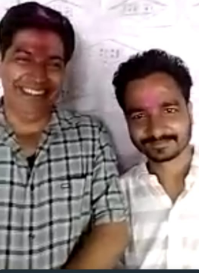 The unity of the men and women is beautifully latent in the warp, weft, and weave of the breathtaking Banarasi sarees and fabrics known the world over.


The super talented Muslims who dominate the weaving sector in Prime Minister Narendra Modi’s constituency in Uttar Pradesh, openly acknowledge the role of their Hindu brethren in the trade. The interdependence for livelihood in the weaving business is huge and it is heartening to see the two communities working together in complete harmony to keep home fires burning for one another.

It takes many skilled hands of Hindus and Muslims to produce a handloom sari over 60 to 100 days. It depends on the design. Persons belonging to these two major communities in the weaving trade have imbibed well the aphorism ‘United we stand, divided we fall.'

While Hindus carry Holi colours and go in a ‘ toli’ (large group) beating drums to the homes of their Muslim friends, the Muslims invite them on Eid for irresistible ‘seviyan’ (vermicelli), a traditional sweet dessert cooked in milk and dry fruits and make sure their wives pack some more for family members of their friends.

Ramzan has studied only till class V in the madrasa but enjoys Sanjay’s company and both sometimes hang out near the ghats in Varanasi or watch films together. Ramzan says Sanjay has narrated the story of the movie ‘Kashmir Files’ to him and he hopes to watch it soon.

This young Muslim weaver says that the very first step taken to weave a fabric reflects exemplary unity. “We source the thread from Hindu traders in Badi Bazaar.’’ 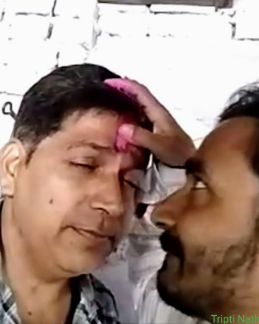 In Ram Nagar, 12 km from Bakrabad, a young Hindu woman from Jaunpur in U.P., sits at the threshold of her house using glue to stick artificial gems on a yellow sari. She says that she gets work from her Muslim brother Fakroo. “I am grateful to my Muslim brother who has been giving me this work for four to five years. I have only studied till class III. My husband is a painter and working like this helps me support my husband in running the household. We have an eight-year-old son. It is important to maintain harmonious relations with all sections of society. "

Ram Nagar, an area believed to be 100 years old, has a population of 20,000. It is dominated by Hindus but has many Muslims as well. Dinesh Kumar, a postgraduate in Political Science, says he has been living in the area since 1992. “I run a newspaper agency and have never felt that I live in an area which has a mixed population. I have more Muslim friends than Hindu friends. ‘’

Mukhtarul Haq, a 56-year-old weaver who holds a B.Sc degree from Benaras Hindu University, talks of Ganga-Yamuna ‘tehzeeb’ (a term used to describe the fusion of Hindu and Muslim culture) that is reflected in the culture of Varanasi. 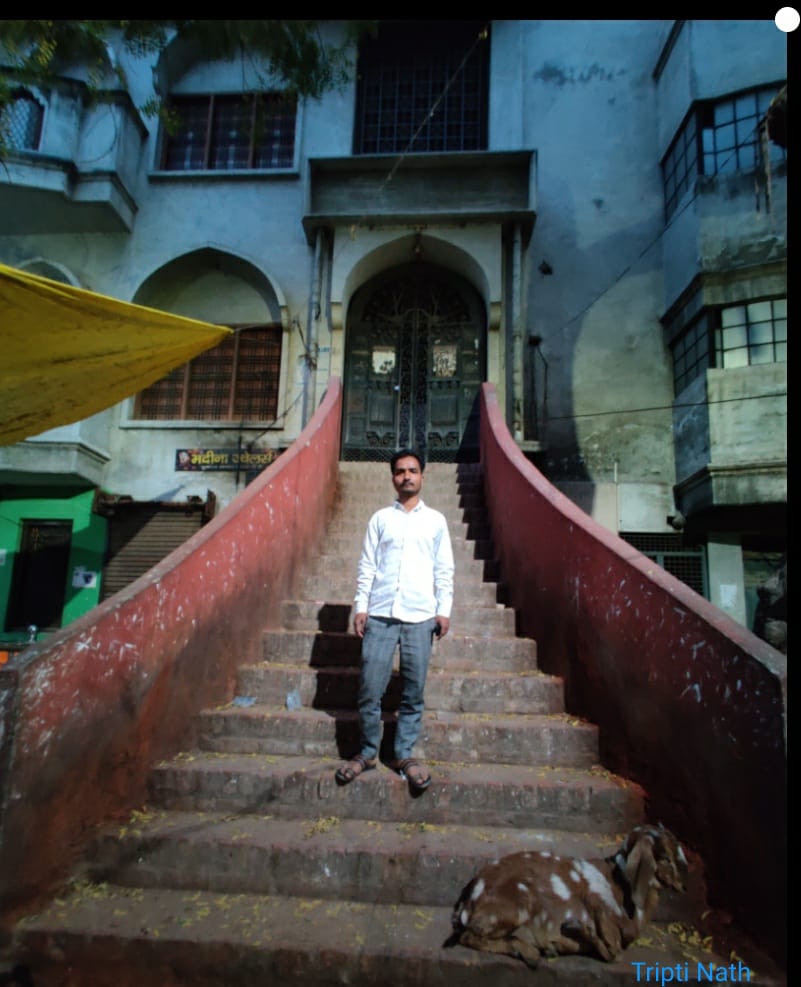 Ramzaan Ali outside the local mosque in his locality

“One community cannot survive without the other. Varanasi city has many Muslim-dominated areas. Of these, Badi Bazaar (Alaipur) and Lallapura have many Muslim weavers. We buy basic raw materials like thread and ‘zari’ used for making saris, from our Hindu friends in Badi Bazaar, Chowk. In Varanasi, 60 percent of the work in weaving is done on a credit basis with old business partners.

“Before the pandemic, Hindu retailers would allow their old business partners in our community to pay for the yarn worth Rs 6,000 even after a week. I send Holi greetings to all of them.’’

And the bonhomie built over years of mutual trust and goodwill extends to festivals. More than three decades after they studied together in a coaching center in BHU, Mukhtarul still greets his Hindu friends on Holi and carries sewain for his doctor friend, in Lanka, seven kilometers away.

“Our area, Rasoolpur has 95 percent Muslim households and is congested. I carry seviyan ’prepared by my Begum Azizun Nisha for my friend, Dr. Rastogi, an orthopedic in Sir Sundar Lal Medical College. Another school friend of mine, Dr. Sandeep Saxena who is now a doctor in Haldwani, would relish the sewain made by my mother Asma Didi and later my Begum. I studied in Central Hindu Boys School from Class VIII to Class XII and passed out in 1983. It has been almost 40 years but I am in touch with my class-mate Professor Jitendra Shahi who teaches Botany. I also carry seviyan for him. He also lives in Lanka.