No Hindu, Muslim for me; I want to represent India: Nikhat Zareen Reigning world boxing champion Nikhat Zareen today said that she is focused on winning a gold medal for India at the 2024 Paris Olympics and it does not matter which community she represents.

‘’As an athlete, I'm here to represent India. For me, Hindu-Muslim doesn't matter. I’m not representing a community but my country. I will continue working hard and will strive to win a medal for my country,’’ the super confident and stylish boxer said at a media interaction at the Indian Women’s Press Corps’ here. Nikhat and Olympic bronze medallist Lovlina Borgohain on Saturday sealed their berths in the Indian team for the forthcoming Commonwealth Games in Birmingham scheduled to begin on July 28.

“I will try my best to bring back a gold medal in the Commonwealth Games. I am on a week’s rest. We have been told that the Indian team may go to Ireland for training in July.’’ Nikhat who turns 26, Tuesday, said that she had to overcome many hurdles including social prejudices to come so far. Nikhat agreed that the journey ahead is bound to be tough. “After I became a world champion, the expectations of people have increased two-fold. So, everybody will be on the lookout for a medal that Nikhat must bring. I won the gold medal in the 52 kg category but in Olympics, we don’t have a 52 kg category. I have to prepare accordingly." 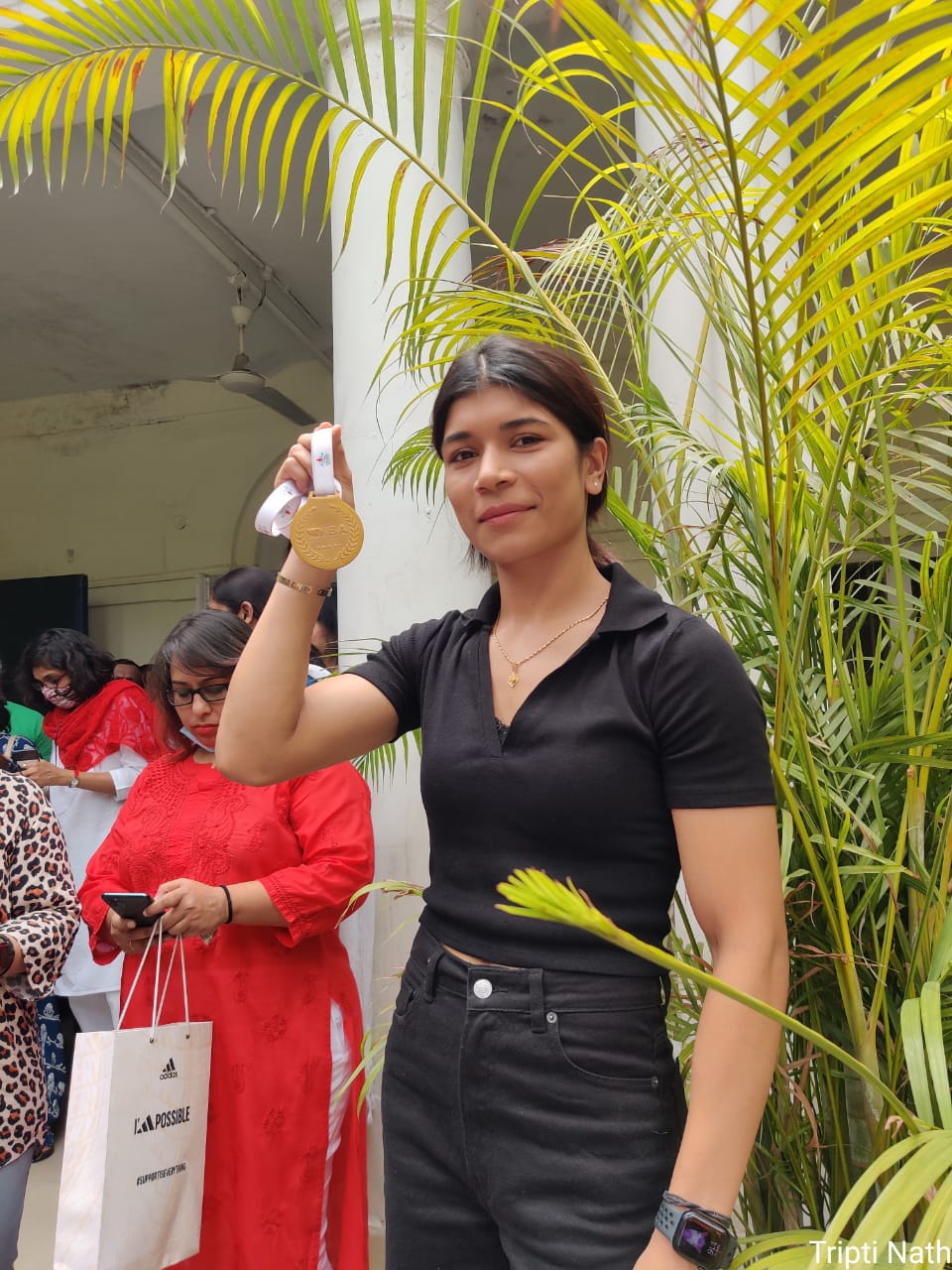 The milestones in her journey are very inspiring. The Nizamabad (now Telangana) born boxer said she remembers the day when her mother cried on seeing her return home with a bloody nose and blood stains all over her clothes. “In 2009, I started boxing. Before that, I was into athletics and my father was training me. I saw girls in every sport except boxing. I asked my father why women do not take up boxing and he told me that people feel that women are not strong enough to take up boxing. That challenged me to take up boxing. From childhood, I was very stubborn and a tomboy. I played only with boys. In the place I grew up, people were rather orthodox. They did not let their daughters step out. I told my father that I will take up boxing and show people that girls can also compete in boxing.My father was a sportsperson and was very supportive. I remember that when I started boxing, I was the only girl in the stadium. I was bashed very badly and my nose was bleeding. Seeing me, my mother began crying and started saying that she has four daughters and that if I suffer facial injuries or broken limbs, it will be difficult to find a match for me. I told my ‘Ammi’ that once I get recognition, suitors will queue up. Even now, I get proposals but I am only focused on winning a gold medal in Paris Olympics."

The world champion said that her father advised her to only focus on fulfilling her dream of winning a medal for the country. "He told me that my opponents will hail me and want to get selfies with me when I win a medal and I see it happening now. “ In childhood, when I would visit people, I would climb guava and mango trees on their premises and they would tell my parents not to bring me along. Now, the same people call up my parents and ask when I am coming back. I am glad that I have changed the mindset of people.

Now, parents of other children also call up my father and ask if I can train their children to take up boxing. My father tells them I am focussing on the game but assures them that I will run an academy after I retire.’’ Dressed in a black T-shirt and black jeans, Nikhat made a humble appearance at the Indian Women’s Press Corps with her manager Udita today. She wore a smartwatch to track her respiration level, heart rate, and workouts. She said that she grew up watching videos of Mohd, Ali, and Mike Tyson and was inspired by Nicola Adams. 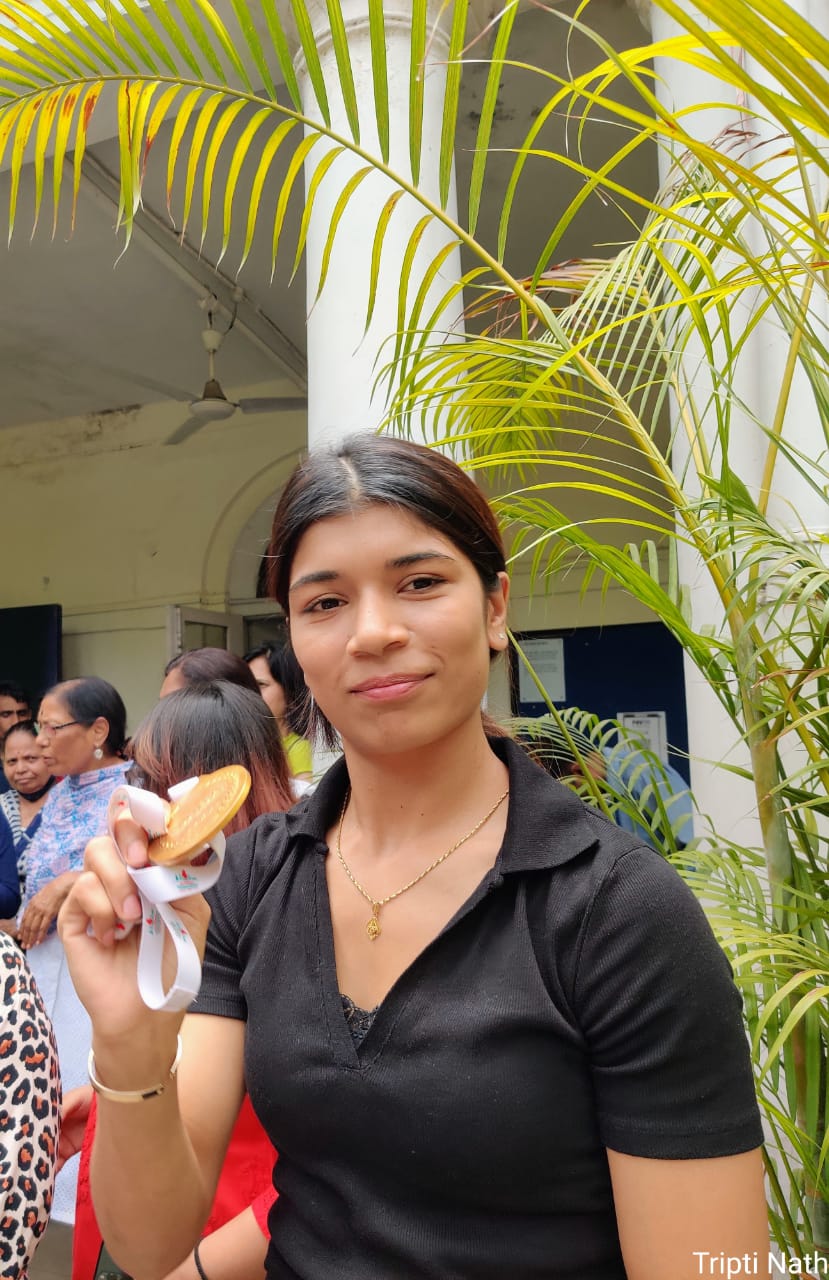 To a question on where Indian boxers are lacking, she said, "Our Indian boxers are very talented. We have strength, speed, and power. It is just that once you reach that (world) level, boxers should be given the training to handle the mental pressure. Once you reach the big platforms, many athletes become nervous and are not able to perform.’’ Asked why boxing is not as popular as cricket in India, she said, “ Cricket matches are telecast but our matches are not telecast. Things will change once this starts happening.’’ She agreed that the support of states and central government is important for sportspersons, most of whom are from a middle-class background. 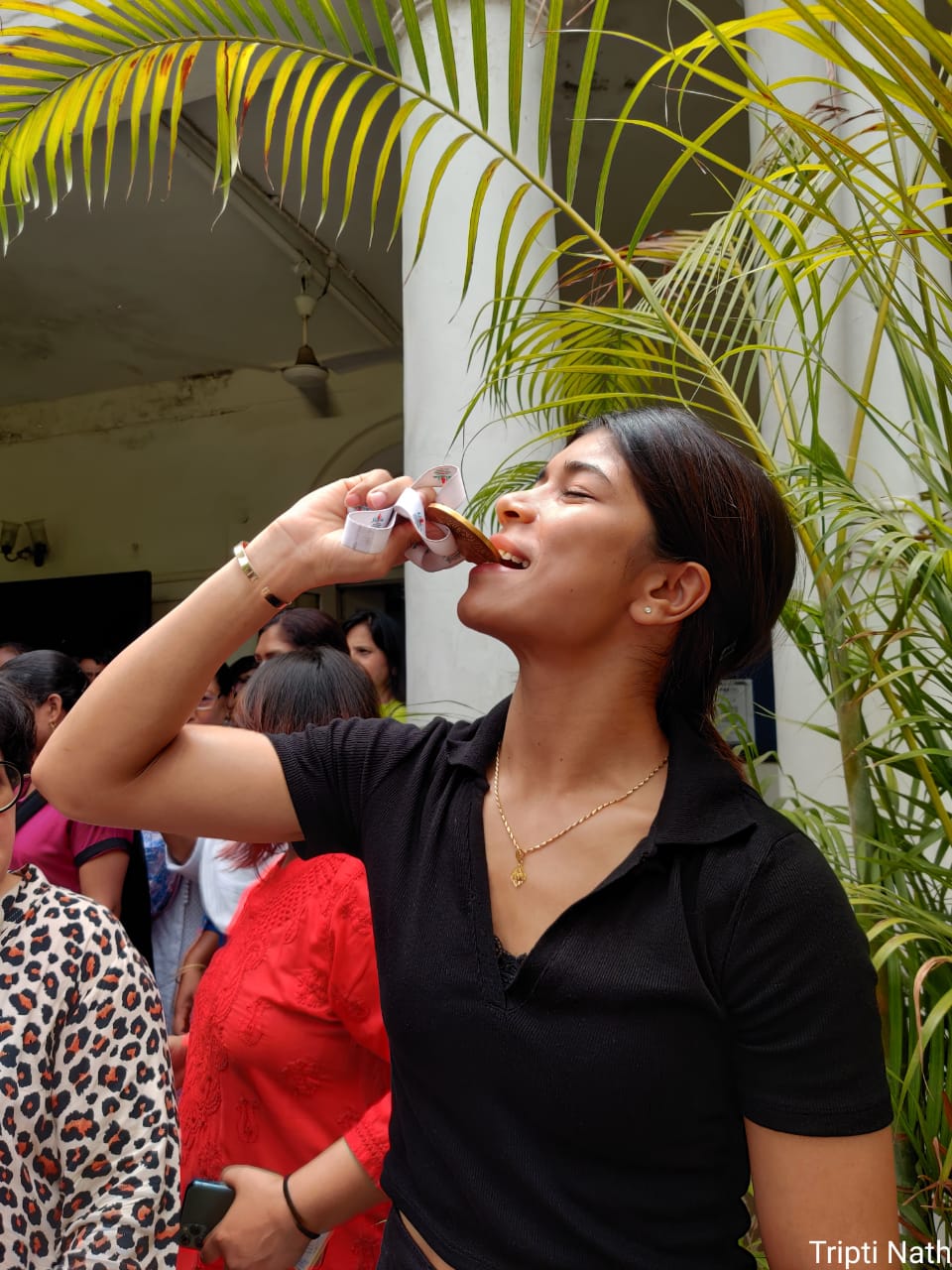 “ The TOPS (Target Olympic Podium Scheme) is very good. I can bear my expenditure as I am in the SAI scheme.’’ Asked if she is planning to learn French before the Paris Olympics, Nikhat who described herself as a foodie, smiled and said, “ Not yet. I only know ‘Bon Appetit!’