Sufiya Sofi Khan, the Ajmer-born runner has set many records including the recent one of being the fastest female to run the Indian Golden Quadrilateral Road in 6 days, 12 hours, and 6 minutes to add to her Guinness World Records.
However, this time she is not racing in Ladakh's low oxygen heights for personal glory but to pay tributes to martyrs who laid down their lives protecting our freedoms and the country’s boundaries.
Sufiya’s run started from the base camp of Siachen on Sunday and she is expected to reach the Kargil Memorial at Dras in Kargil to pay tributes to the fallen heroes of the Kargil war of 1999. In the war started by Pakistan in Kargil, 559 soldiers were martyred and over 1300 injured. 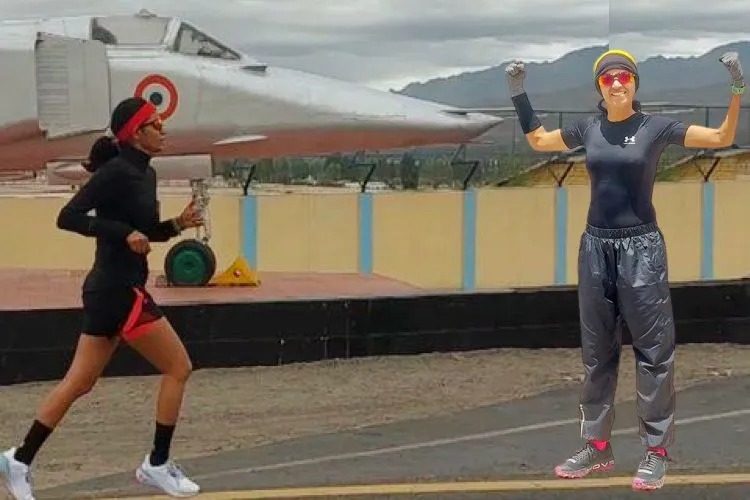 Sufiya Sofi Khan on the run from Siachen to Dras, Kargil
Sufiya Khan is a professional runner who has set several records and also registered her name in the Guinness Book of World Records three times.
This time, Sufiya Sofi Khan will complete her 470-km journey from Siachen Base Camp to Kargil War Memorial in 7 days in what she calls 'Kargil Vijay Run'.
Her latest Guinness Book World Record is about the fastest journey of 6,002 km on India's longest quadrilateral highway in 110 days.
For the 35-year-old Sufiya, running is her passion. She quit her government job five years ago to become a full-time runner. Earlier, she completed her run from Kashmir to Kanyakumari for Mission Home. Sufiya Khan with Army officers on the way from Siachen basecamp to Dras
Challenges are nothing new for ultra-runner Sufiya. After making it to the Guinness Book of World Records for the third time she had already started preparing for her run in the Ladakh’s mountains for the nation’s heroes.
Sufiya named her campaign 'The Tribute Run' and dedicated it to the brave men of the Indian Army for their unprecedented sacrifices for the protection of the country.
Her 7-day campaign started on July 17 and she will reach Kargil on 23 July, on Kargil Vijay Divas.
Her journey is through extremely dangerous routes and adverse weather conditions beginning from an altitude of 3,400 meters and via 5,359 meters in Khardung La, where oxygen levels drop to 40 to 60 percent and temperatures drop well below freezing.
Sufiya said being a disciplined runner Sufiya said she has constantly worked towards pushing her limits and inspiring more people to do the same. Sufiya runs in memory of the supreme sacrifice made by soldiers in 1999 Kargil war
She says: “This run is special and close to my heart. I need to pay tribute to the work of our soldiers and their selfless service to the nation.”
She said she is blessed to have the best support system and especially coaches. “My coaches and all the people who have supported and encouraged me to tackle every challenge along this campaign. I have been training continuously for the past 6 months,” Sufiya Sofi Khan told media persons.

Also Read: Sufiya wants to go around the world in Saree

She had set a record for the longest trek from Manali to Leh, completed the Golden Quadrilateral run in the shortest time, and became a record holder for the fastest Kashmir to Kanyakumari runner.