The Afghans believe that India is interested in establishing a semblance of a relationship with their country after the first official level delegation led by the senior Ministry of External Affairs visited Kabul and interacted with the Taliban officials for the first time after the Taliban took charge of the country in August.

While the government of India said the delegation went to oversee the distribution of the humanitarian aid being provided by India for the people of Afghanistan, the Singh-led team also visited Children’s specialty hospital in Kabul that was set up by India in the seventies.  However, going by the reaction of the Afghans, it appears they have high expectations from the visit. India had allocated about $25 million as an aid for the country in the federal budget in February.

“India’s development and humanitarian assistance have received a widespread appreciation across the entire spectrum of Afghan society,” the foreign ministry said.

According to the TOLO News report, Abdul Qahar Balkhi, a spokesman for the Ministry of Foreign Affairs said, “The meeting was focused on India-Afghan diplomatic relations, bilateral trade, and humanitarian aid.” 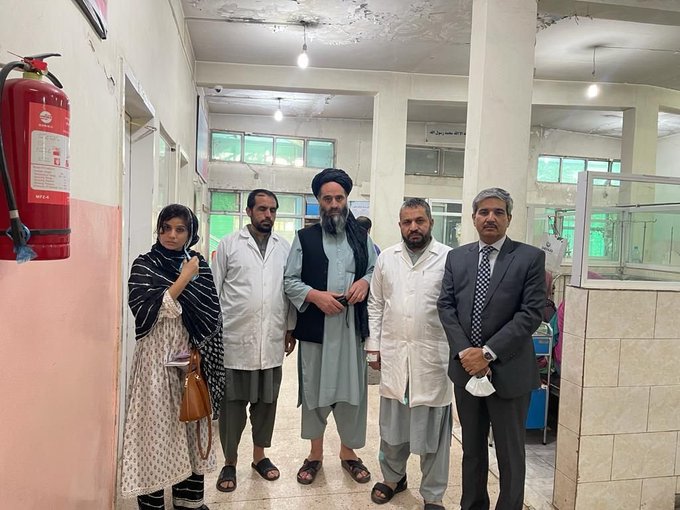 Indian delegates visiting  the Children's hospital in Kabul
The Taliban foreign ministry also released pictures of the meeting between Singh and Muttaqui. Both seemed to be in a relaxed and cheerful mood.
Balkhi said that the acting foreign minister called the Indian delegation’s visit to Kabul “a good start” in Afghanistan-India ties.
“Muttaqi also expressed gratitude for the recent Indian humanitarian and medical assistance to Afghanistan, stressing the resumption of projects by India, their diplomatic presence in Afghanistan, and the provision of consular services to Afghans, particularly to Afghan students and patients,” Balkhi added.

Afghan analysts said that India is interested in engagement with Afghanistan for security reasons.“India is interested to be present in Afghanistan and it is most likely due to security concerns,” said Niamatullah Bizhan, an international affairs analyst told the TOLO News. India had allocated about $25 million as an aid for the country in the national budget in February.

“India’s development and humanitarian assistance have received a widespread appreciation across the entire spectrum of Afghan society,” the MEA said.  The officials said India has historic and civilizational linkages with the people of  Afghanistan and the country's policies will also be guided by this bondage.