Sadhguru's save the soil gets a tradition welcome in Istanbul Sadhguru being welcomed in Istanbul with a Dervesh dance (Twitter)

In their quest for consumerism and materialistic ware, the humans are least aware that each year the earth is losing lakhs of species of microbes, the nano lives in the soil that sustains and nurture plants and indirectly all life on the planet.

In an interview with American Television's The Daily Show host Trevor Noah, India's most pro-active Yog Guru Jaggi Vasudev alias Sadhguru said, "27,000 microbes are going extinct every year due to industrial farming across the globe, and no replenishment of organic matter in the soil. If this continues, then in 30-40 years we won't be able to grow food." 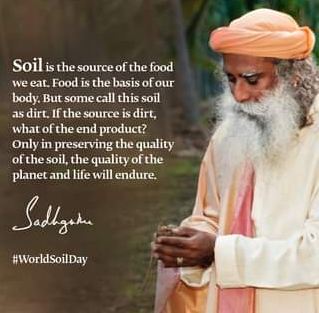 Jaggi, an engineer turned Yoga Guru, who is known the world over for his inner engineering programme, is on a 100-day solo journey during which he is visiting 27 countries on a motorcycle.

Sadhguru posted this video of he being welcomes in Istanbul on the 34th day of his mission:

Wonderful to be with the lovely people of Istanbul. It is time we behold the Soil beneath our feet with the same reverence that it beholds our very lives. May we be united in our humanity to #SaveSoil. -Sg #SaveSoilIstanbul #SufiWhirling@sudhic212000 @CGI_Istanbul @cpsavesoil pic.twitter.com/SRptr6brq2

At the end of it, he would have covered a distance of 30,000 km and engaged with world leaders and the media to spread awareness about conservation of natural resources, especially soil.

He has been traveling on his motorbike across the continents to appeal to common people, the governments, the advocacy groups, and the United Nations to realize the catastrophic impact of the rapid loss of nutrition generating microbes from the soil. If this trend continues, he said, the soil on the earth would become infertile.

On the 34-day day of his journey, sadguru was received in Turkey's capital Instanbul with a traditional dance of the Sufis called dervish. He posted this video of the event:

Sadguru being welcomed in Bucharest, capital of Romania:

Human intelligence, competence, and capability is in mitigating problems before they happen. May we come together as one voice with one message to #SaveSoil. Let Us Make It Happen. -Sg #SaveSoil #SaveSoilBucharest pic.twitter.com/EqbgF0GzvH

Jagadish "Jaggi" Vasudev, is the founder of the Isha Foundation in Coimbtore, Tamil Nadu in 1982. Besides spirituality and Yoga, Sadhguru to his lakhs of followers across the world has launched successful missions to reclaim the rivers and water bodies of Tamil Nadu and increase the depleting forest cover of the state.

During his journey, several governments and NGOs have signed memoranda with his save the earth Initiative to raise awareness about need to save the soil.

Four Carirbean nations - Antigua and Barbuda, Dominica, St. Lucia, St Kitts and Nevis - that face the biggest existential threat from the impact of global warming, have signed an agreement with Sadhguru's "Conscious Planet Initiative" to save the earth from the impact of environmental degradation.

Sadhguru presented the idea of the initiative at the United Nations in Geneva on April 5 and it was supported by the WHO, UN SDG lab, and IUCN.

He was greeted and welcomed in Bulgaria with enthusiasm:

The food WE eat, the body WE carry, the clothes WE wear—just about everything comes from Soil. The greatest expression of our love and concern for every Life around us is to #SaveSoil. Let Us Make It Happen. -Sg #SaveSoilBelgrade @cpsavesoil pic.twitter.com/dUqJ9mj8EF

Sadhguru a tech-savvy Yoga Guru has even raised awareness about Indian textiles in the USA and other fashion capitals of the world by holding an exhibition of Indian weaves and introducing them to the designers.

While Sadhguru has been posting pictures of his meetings with the world bodies, leaders, and common people on Twitter, he said he plans to cover at least 60 percent of the voters of the world in the current phase.